October Weeks has a hot new paranormal  romance out that you need to add to your TBR list immediately – especially if you’re a fan of her 2015 Readers’ Choice Award-winning The Damned.  A Taste So Bittersweet is the retelling of that story from Fiona Wesley’s POV. Check it out! 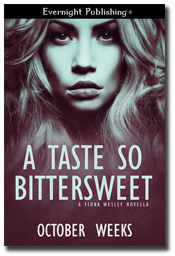 Eight years ago, twenty-nine year old slayer Fiona Wesley was turned into a vampire. She survived her transformation but carries the nightmares and scars from the attack. Continuing to hunt the worst of her kind keeps her grounded, as does her new family. She does her best to stay away from slayers, but the past has a way of sucker-punching a person.

Now, not only is she facing the beasts that turned her, but also the one slayer that’s given her nightmares. A slayer that was once her best friend. All of that just as she’s taking her first steps into the arms of the man she loves.

Her name was spoken softly, in an old Danish tongue, and brought her through a sleepy fog. She couldn’t remember… What was she doing? Looking down, she saw that she was in a towel, sitting on the floor against the cool porcelain tub. The water was turned off. I must’ve fallen asleep before I even got in the bathtub.

“Sorry,” she whispered as fingers slid through her hair.

This happened when she went too long between feedings, though this time it was not of her doing. The depleting of reserves happened more quickly in her because of her active slayer blood. She would wake to find she had fallen asleep, her memory cloudy as to how she gotten to where she was and often, though not this time, her vision would be slightly blurred. But she hadn’t felt an urgency to feed when she turned the bath water on.

“Do not worry,” Mads said softly as he drew her to her feet so she wouldn’t feel so vulnerable with him. He rested his back against the wall as she fought to keep her head up. She was waking more and more, and realizing her surroundings.

“Feed from me, Fiona. You need the blood, min skat.”

Her body became aware of his closeness as he spoke, just as sunlight started to come into the room. She had not fed from Mads in almost two years, and she knew he had guessed the reason for that. It no doubt angered him to know she truly thought she didn’t deserve that kind of happiness, that kind of pleasure, after what she had done. And yet, knowing all of that, he never stopped calling her min skat; my treasure.

The dawn began to golden the bathroom and she felt the weight of tiredness hit her again, anchoring her into it.

“Everything happened too fast,” she said, barely audible. He laid his hand on the back of her neck. “You know that. Sasha must have told you about the strigoi.”

“He did,” he said. “I know you do not wish to feed from me, Fiona, but my blood is stronger than all but one other in this house. It will strengthen you while you sleep.” His gentle tone made her meet his eyes. “You do not have to take much, just enough to replenish you. When you wake you will need to feed again until your reserves are full.”

She sighed heavily and leaned her forehead on his chest when the rising sun bathed the room fully, sweeping over her. She inhaled deeply, taking in the scent of him, the luring sound of his blood in her ears. Masters such as he, as old as he, had blood that beckoned and tasted so good it was likened to the taste of chocolate for human women. So very tempting, and he was quite right—his blood would renew her system while she slept, and she could finish filling her reserves when she woke. The decision was easier to make with that on her mind.

Common sense was a slayer’s best asset, along with trust in one’s instincts. It’s what kept most of them alive. And a slayer she still very much was.

Mads sank a hand into her still up-do hair and massaged her scalp gently, and she let him feel her heavy need. He felt it when she made her decision and unbuttoned the last two buttons of his shirt, opening it wide enough for her to take from his chest.

“Take from me,” he whispered in her mind, coaxing her gently. “Take what you want, what you need, of my blood, min skat.”

She moved her head slowly back and forth, caressing his bare skin with her teeth. Her canines grew to an inch in length.

“Take from me.” His voice caressed.

Fiona sank her fangs into his chest, just deep enough for a steady flow of blood. She retracted them so her mouth could cling freely to the smooth flesh just above the light covering of chest hair. He tasted far more enticing than she remembered: sweet, with a hint of honey and a touch of sea salt … and deliciously warm.

His hand in her hair tightened as he held her head to his chest, his other hand lightly touching her left hip. She knew he was fighting not to touch her like he wanted to, that he felt this moment was meant to be relished for what she could give, not for what he could very easily take.

“I forgot how good you taste,” she whispered in his mind.

He growled low, and his hand tightened slightly on both her head and her hip.

“You have enough, Fiona,” he whispered, regretfully. “You may stop.”

Fiona took in one last swallow of his blood before stopping, letting out a moan that spoke volumes, even as soft as it was.

October Weeks is a paranormal/dark fantasy/horror writer and a reader with too many books and not enough shelves!