For those of you kindred spirits who’ve also landed on this year’s Naughty List, Author J.R. Gray has a lovely holiday treat today –  a FREE festive read & part of her sizzling Bound series: Illicit Activity. 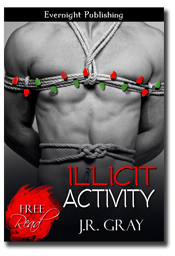 The Christmas season is fast approaching for Jesse Goldmen and George Sirus, and their forced break up weighs heavily on their sanity. Trying to keep a connection alive is almost impossible as they turn to stolen late night dinners and secret meetings, which never seem enough.

Zac Goldmen takes an interest in George’s slave, Elliot. Being told no only makes Zac want Elliot more, so he starts a ridiculous campaign to try and shock and charm Elliot into bed. But his advances are put on hold when Elliot gets outed in the aftermath of the blackmail scandal, causing a big media storm for him and his father the Vice President.

Kennedy seeks solace from Zac, when things just get too much for her, bringing out his hidden caring side. Zac finds himself torn between being a friend and an easy hook up. Determined to see Elliot and bring him some holiday spirit, Zac starts a battle of wits with George. Will George be able to outsmart Zac, and keep him away from Elliot, for long?

The doorbell rang early in the morning. Elliot had finished his chores and was sitting on the floor next to the fire, working on his homework. There was no one else in the penthouse, and he wasn’t expecting anyone. When he wrenched open the heavy, ornate door he found Zac, Jesse’s brother, staring back at him wearing fireman pants and suspenders to hold them up. His body was smeared with charcoal, and he looked oiled. Elliot was entirely confused.

“The exact face I wanted to see.”

“Can I help you, Sir?” Elliot reverted to his training.

“Yes, I have a hose that needs servicing.” Zac grinned wickedly.

Elliot tried not to let the shock show on his face. “I’m sorry, the King is out. Can I take a message?” He shifted and squirmed, getting flustered at the seeming advance from the beautiful redhead.

“I didn’t want it from him.” The bulge in Zac’s pants was noticeable, and Elliot tried not to stare. “And I knew he was gone.”

“How did you know he was gone?”

“I watched his car through the camera I installed above his parking space ‘til it left.” He flattened out his mouth and raised both brows like it was no big deal.

Get your FREE copy here:

If Gray wasn’t writing…well, that’s not possible. The buildup of untold stories would haunt Gray into an early grave or possibly a mental institution where the tales would end up on the walls in crayon and finger paint.