Happy Monday all! Do I have a treat for you today! The lovely and talented Nicola Cameron is here to tell you about her spectacular new Sci Fi /Cyborg Romance, Degree of Resistance. All hyperbole aside, it is epic. Seriously. Do yourself a favour and just one-click that bad boy now. You can thank me (erm, I mean… Nicola, later.)

Hello, and thanks so much for having me on today! Degree of Resistance is my first foray into cyborg romance, and I had a huge amount of fun building the world of the Pacific Protectorate and discovering Evie and Ben’s story as it progressed (I have to admit, I love these two so much. That scene in Chapter 12 hurt to write). There are five more books planned in the series with a possibility of two prequels and some side stories as they occur to me, so I can promise you that you’ll be seeing more of Evie and Ben in the very near future. 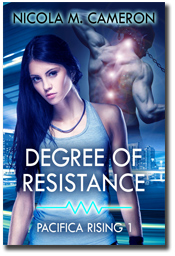 A perfect society hiding a terrible secret. An innocent man condemned to cyborg slavery. A brilliant woman determined to set him free.

Freelance tech Evie Contreras belongs to the Employee class of the Pacifica Protectorate, the “perfect society” that rose from the ruins of the West Coast. But Evie knows about Pacifica’s festering core and the secrets that keep it in power. And when she discovers that Pacifica has turned her fiancé Ben into a cyborg soldier/slave, she will risk everything to rescue him.

Saving Ben is the first step in a deadly game between Pacifica and a shadowy resistance group known as Rubicon. In return for Rubicon’s help, Evie must retrieve a hidden artificial intelligence that may hold the key to protecting Earth from a deadly new disaster. 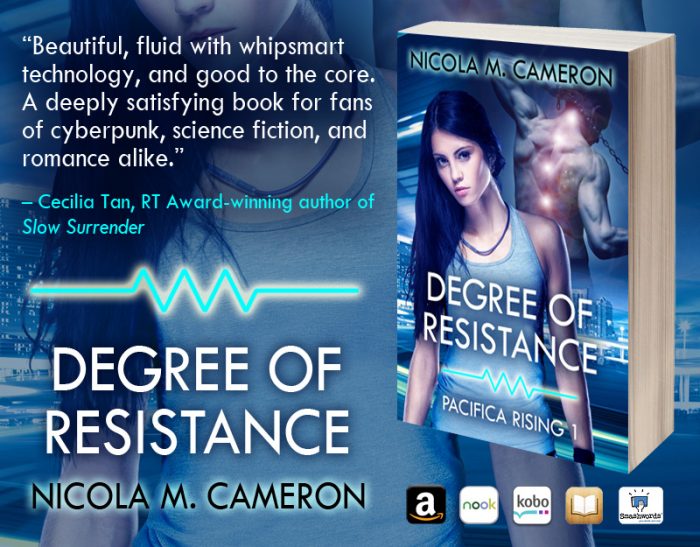 Without a word he loosened the knot in the towel and let it fall.

He reminded her of a da Vinci nude she’d once seen, every muscle developed without unnecessary bulk and giving the impression of restrained power. His chest was the same from her memories at the pool, beautifully shaped pads of pectoral muscle and shoulders ending in curved deltoids that she wanted to grip. The same light scattering of blond chest hair narrowed to a trail that led down over trim abs to his navel and beyond.

His legs were those of a runner, lean muscle and tendon rising in powerful mounds at the backs of his calves, along the length of his thighs. The hair covering them was sparser, only slightly darker than the hair on his chest, and curled against his indoor-pale skin.

Taking a deep breath, she looked at his groin. The hair darkened here, turning sandy brown and curling in a springy nest around a well-shaped cock, neatly circumcised. It had thickened a little, judging from the way it stood out from his body, but wasn’t anywhere near full erection yet.

He laughed softly. “You should see your face. You look like all your birthdays and Christmases came at once.”

“I think they just did.” There were no scars, no signs that any part of his body was artificial. “You’re perfect.”

He glanced down at himself. “I think you may be a little biased, but thank you.” His pupils expanded, compressing all the light blue into a thin ring around each black pool. “Besides, you’re the one who’s perfect.”

He came to her and knelt, gently urging her knees apart so that he could move closer. Her heart raced as he loosened the belt on her robe, letting it fall to each side. The terrycloth gaped open, putting her on display the same way he’d done for her.

He didn’t say anything for a minute as he drank her in. The nervousness she’d felt earlier was gone, banished by the naked worship in his eyes. “You’re everything I ever wanted.” His voice was husky. “You’re so beautiful, baby.”

She fought back the sudden urge to cry from sheer relief. “Kiss me. Please.”

He did, his chest pressing against her breasts as he slid the robe down her arms, his mouth devouring hers. She surrendered to the delicious sensation, every brush and teasing press lighting up her nerve endings like wildfire. When his tongue trailed along the soft inner flesh of her lips she opened them, welcoming him in. Between her thighs an echoing heat began to build.

It was the night in the front seat of the GoCar all over again, but this time they didn’t have to stop. And it was much better than the evening in the park hotel because now he knew who she was, who he was.

His tongue danced around hers before breaking away to lick at the roof of her mouth. A shocking pulse of pure sensation ran through her body and she moaned into his mouth.

She broke away for a necessary breath and heard him chuckle. “Okay, so I like that,” she muttered, amused by his smugness.

“Good. I like making you moan, baby. Plan on doing a lot of it, to be honest.”

Nicola Cameron is a married woman of a certain age who really likes writing about science fiction, fantasy, and sex. When not writing about those things, she likes to make Stuff™. And she may be rather fond of absinthe.

While possessing a healthy interest in sex since puberty, it wasn’t until 2012 that she decided to write about it. The skills picked up during her SF writing career transferred quite nicely to speculative romance. Her To Be Written work queue currently stands at around nineteen books, and her mojito-sodden Muse swans in from Bali every so often to add to the list, cackling to herself all the while.

Nicola plans to continue writing until she drops dead over her keyboard or makes enough money to buy a private island and hire Rory McCann as her personal trainer/masseur, whichever comes first.