A little while back, I had the distinct honour of beta reading Deep Water, the third in Nicola Cameron’s epic Olympic Cove series. If you haven’t already, I highly recommend you pick up books 1 & 2 (Storm Season & Breaker Zone, respectively) so you can dive right in (see what I did there?) to book 3 without missing a beat!

In the meantime, one of Olympic Cove’s most colourful denizens has deemed us worthy a short Q & A. So without further preamble or ado, I give you: Poiseidon!

How does it feel to be the star of your own Olympic Cove book?

Poseidon: (side eye) I am the God of the Sea, you may remember. That carries quite enough status for me. Although if pushed, I’m rather pleased that my backstory is being revealed. I’m not actually as stiff and unpleasant as I came off in Storm Season and Breaker Zone, you know.

This book focuses on your relationship with your consort Amphitrite and your lost mate Medusa. How do you feel about getting a second chance to win them back?

Poseidon: Grateful, of course. While I’m ashamed to admit it, our separation was almost completely my fault. After seven thousand years of being alone I’m ready to do whatever is required to win back their good opinion, as well as their love.

Speaking of good opinions, tell us about your sisters-in-law.

Poseidon: (sighs) Fine. I have forty-nine sisters-in-law. Hyacinth and I have a perfectly functional policy of mutual indifference in place. Ligea, Pasithea, and Iaera – the less said about those vapid harpies, the better. Thetis, well, we have a shared past that makes my current task all the more difficult. The rest of them are pleasant enough, and hopefully once Amphitrite and I solve our present situation we’ll all go back to being one big happy family.

Keeping track of all their birthdays must be a bitch, though.

Poseidon: You don’t know the half of it. 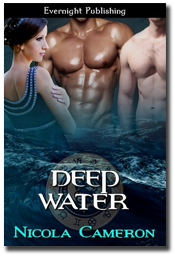 Poseidon, God of the Sea, has spent millennia alone due to a single terrible act. His consort Amphitrite has sworn never to forgive him, and he’s forced to live with the knowledge that he drove an innocent girl to her doom.

But when one of the Olympic Cove cottages gets an occupant with an all-too-familiar soul, Poseidon discovers that the Fates have given him a second chance. Now he must try to right the wrongs of the past and win back both his beloved consort and the mate he betrayed.

Assuming, of course, that the Mad Nereid Thetis doesn’t interfere…

Feeling like he was in another one of his dreams, Griffin let himself be eased onto the beach blanket. He stretched out, wiggling a bit to get comfortable as Dunn followed him and did the same. Overhead, the Floridian night was heavily spangled with stars.

“This is nice. Should’ve done this the first night I got here.” He glanced at Dunn. The man was a shadowy form stretched out at length, hands clasped placidly on his middle. “Comfortable?”

“Very,” Dunn said, staring up at the stars. “You’re right. This is quite lovely.”

“Yeah.” Griffin swallowed. He had no idea what to do next.

Except to be honest. “Dunn, I need to say something.”

“I hope this doesn’t offend you because I really don’t want to do that, and to be honest I don’t know why I feel this way but…” He swallowed, hearing his throat click. “I really want to kiss you right now. If you don’t want to, it’s fine, I understand, but I thought I’d ask.”

“Ah.” Dunn’s head turned towards him. “Well, then, if we’re being honest, I’d like to kiss you as well.”

Something electric shot through Griffin, swamping the fear. “Oh. I didn’t … I mean, I thought—”

“That I prefer women? I do, as I suspect you do. But I’ve been known to make exceptions.” The other man chuckled softly. “I believe the term is heteroflexible.”

My God, has he done this before? That’s not bad, though. At least one of us knows what he’s doing. “Okay, good. Um…”

“Shall I come over there?”

Griffin rolled onto his side and Dunn mirrored him. A hand came up and cupped his cheek, warm against the soft coolness of the evening breeze.

He closed his eyes as Dunn leaned forward. Lips brushed against his, delicately intent. His lips tingled under the soft pressure, and he could feel the prickle of Dunn’s mustache and beard, something he’d never felt before, at least not during a kiss.

It was weird and slightly scary. It was also fucking terrific. “Do that again,” he whispered when Dunn pulled back.

They kissed again, and Griffin let his lips open. The tip of Dunn’s tongue traced along them with that same delicacy. The sensation sizzled across his nerve endings, poking his dormant libido right where it counted.

Dunn pulled back a bit. “If you want to stop at any time, say so,” he said, his voice rough.

He did, tongue slipping into Griffin’s mouth with deft skill. Griffin gave himself over to it, enjoying the sensation. It was similar to kissing a woman but with a different undertone to it, hungrier somehow. He felt like he didn’t have to hold back, that anything he threw at Dunn the other man could take.

And then Dunn’s tongue licked along the roof of his mouth, sending sparks of desire shooting through him. He couldn’t help moaning in unabashed pleasure.

Dunn took that as a signal to roll closer, fitting himself along Griffin’s body. It was like the kiss, scary and exciting at the same time. Dunn slid an arm around him, a hand coming to rest in the small of his back as his mouth continued to duel sweetly with Griffin’s.

After a bit Griffin felt something poking him in the thigh. It dawned on him what was happening. He broke the kiss with a gasp, sucking in air. “Fuck. You’re hard.”

“Well, yes, that does happen.” Dunn sounded amused. “Does it bother you?”

Griffin gulped. It should, he knew that. And yet all he wanted to do was do a wicked little shimmy against Dunn, make the other man moan for once. “No. It’s fine.”

But Dunn paused, his hand lightening on Griffin’s back. “You’re not aroused.”

He shook his head. “It was the last round of radiation. Haven’t been able to get it up since.”

He wasn’t sure, but he could have sworn he saw Dunn smile. “All right.”