Thank you so much for having me on your blog today. I visited with my re-released title,Character Obsession. It was published by my publisher, Breathless Press, but they were closed some time ago. I am so grateful that Evernight adopted this story. I was so happy with some additional parts suggested by my editor here in Evernight. I think they were a great idea! 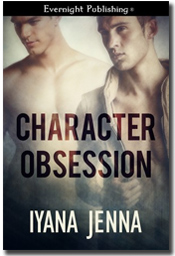 Chase Riley, a Hollywood actor, is kidnapped. One of the abductors, Luke Nelson, is delusional and thinks that Chase is Elliot, the character Chase plays in his procedural cop series on TV. Luke plans to replay what happened to Elliot on the show with Chase. The worse thing is that Luke gets help from his father who seems to be as crazy as his son.

Chase’s boyfriend, co-actor Aidan Buffett, is on a trip with his sister when Chase is abducted. He grows worried when his call to Chase goes unanswered. Will he ever see his boyfriend again?

This is a previously published work. It has been edited for Evernight Publishing.

Chase’s mind whirled and before he thought of anything else, he grabbed the door and threw himself out—or so he thought. The man was faster. A lot faster. He seized Chase by his jacket and just—stabbed him in his side. Chase caught his breath, and for some time he didn’t realize what happened. He sucked in a breath and whimpered when the guy yanked the knife out none too gently. Chase felt his world darken so he didn’t notice when the man slipped out of the car, came to be at the driver’s door, and wrenched him out from behind the steering wheel. As his breathing turned labored, Chase grappled at the source of the pain on his side and winced as he grasped it.

“Come on. Move.” The guy grabbed him by the shoulder and pushed Chase in front of him.

Chase swayed in the man’s clutches, but he pulled himself up as he controlled his breath.

Chase attempted to plant his feet as he was dragged up the stairs, but the pain had become too much and he could only comply. At one time the man rested him against the wall, took off his sunglasses, and pulled down his jacket hood, revealing himself. Chase gasped. The man was practically the mirror image of that Bob Nelson he met earlier at the diner, only rounder and much sturdier. And also a lot younger. What worried Chase was this man took off his disguise and didn’t seem too concerned he could recognize him. Not like Chase would be able to escape him and go to the cops, anyway. He was too sluggish to even move. They’d come in the back door, but not much attention was given to them by those at the front desk. Chase suspected that the man had stayed in the hotel long enough that he’d become just another familiar face.

The man’s grip tighten around his arm, but Chase kept his glare toward the receptionist in an attempt to get his attention—which failed totally—for the guy kept his head down. As his abductor dragged him toward the elevator, Chase palmed his side and lifted his hand with dread. It was damp and deep red with blood.

“Don’t do anything you’re going to regret,” the guy whispered to his ear as they got into the elevator, which, to Chase’s dismay, was empty. “I don’t want to have to kill you, Elliot. I love you.”

Chase turned cold at the mention of his character’s name. “I’m not Elliot,” he choked out. “I’m Chase.”

“Hush.” The man pulled Chase’s back against him, wrapping his long, muscled arm around Chase’s shoulders, waving the knife before Chase’s eyes.

Reading, watching movies, and being unable to find exactly the thing she wanted to read have led Iyana to write her own stories, mostly about man-on-man romance that has fascinated her since as early as the Starsky and Hutch era. Teaching and writing English course books during the day, Iyana spend her nights mostly dreaming of love stories between two men who are protective toward each other.