Happy weekend, everyone! Hope you’re all doing something fun. I know I am! I’ve got Raven McAllan here to tell us all about her latest release, Sybille’s Lord.

::Waves madly:: Thank you so much for letting me hijack your blog.

I’m so excited. Sybille’s Lord is ready to jump onto your eReader.

This is the third story in the Moon Curse series, and I’ve had so much fun writing them.

Compromised, the first story is a prequel, and a free read. That’s Theo and Mijo’s story. The rest of the books are their children’s stories as they try to make their family’s fortunes

The second story is Lord Suitor. That’s Tessa’s story. You can buy that here on Evernight, or from the aforementioned sources.

And now ::drum roll:: book 3, Sybille’s Lord is out on 11th September and yes you can get it from Evernight here

That of course is Sybille’s story. 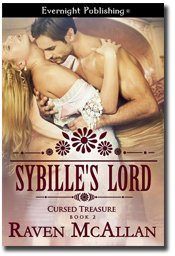 When you have to marry to save your family’s fortunes, and the man of your dreams offers for you, you ought to be ecstatic, right?

Not, if you want it all, you’re not. Having witnessed first hand a love match in the shining example of her parents, Sybille is not prepared to settle for anything less than true love.

Thomas, Lord Jeavons might have proposed, but does he love her? Especially once she tells him her secrets.

For his part, Thom is enchanted, and far from being put off by Sybille’s demands, he vows to do everything in his power to convince her that he is the only man for her—both in and out of the bedroom.

With her family’s good name at stake, can they solve all their issues before it is too late and find their own happy ever after?

“Consider yourself properly betrothed. Shall we celebrate?” He put her down, but didn’t let go of her.

Luckily. The room spun as she tried to stand, and she clutched the arms that held her. “Er, one moment.” She shut her eyes and then opened them cautiously. Nothing moved. Satisfied she wouldn’t disgrace herself and be sick, she nodded. “How?”

“Oh I’m sure we can think of something.” He snagged a bottle of wine and two goblets, and with his arm over her shoulder, steered her toward the door. “Shall we see what we can come up with?”

Several hours later, Sybille opened her eyes and realized she lay snuggled and sated next to Thom in a sumptuous four poster. They had, she decided, indeed seen what they could come up with. Several times. In a myriad of ways. Who knew a cravat could have so many uses? Her body flooded with heat as she remembered how he’d covered her eyes and told her to use her senses and just feel.

Even better were the scenes that flashed though her mind when he’d handed the now mangled cravat to her, and with a wicked grin, said simply, “your turn now.”

She used it to tie his hands, an act that both surprised and excited her, and, she judged, him as well. Eventually, after he’d entered her in more ways than she’d thought possible, culminating with her on her knees and him behind her—no pamphlet she’d seen had talked about that—they had collapsed in a heap on the bed. Sweaty, happy, exhausted, and in her case, knowing it was perfect.

As he slid out of her, he rolled to one side, scooped her up and settled her in the crook of his arm. “That was everything…” He yawned. “All…I love…” He sighed, yawned again and snored.

Sybille stifled the ready giggle that begged to be released. Mind you, he had worked hard, been incredibly inventive and…she yawned as well. Ten minutes wouldn’t matter.

Those ten minutes had turned into many hours. She turned her head, and noticed the first rays of dawn were showing though the windows. They’d hadn’t even got around to closing the shutters before they’d tumbled onto the bed.

Sybille moved her head cautiously and looked at the slumbering man who held her tight in his arms. He looked so innocent, which was a description she decided could never be used when he was awake. However, at that moment, she itched to see how long the expression or attitude would last. She reached behind her and used her forefinger to poke the easiest bit of flesh she could reach. His stomach.

Thom jumped, grunted, snorted and snored. Sybille wasn’t sure whether to laugh or shout in his ear. At least he hadn’t passed wind.

She had no idea what time it was, around five or six she decided, and although not the time she would normally rise, even in the country, she wanted to talk. She wriggled around, and did her best to ignore the part of his anatomy that was once more making its presence known to her, by pressing on her rear.

No, she amended her thoughts, needed to talk. To find out what happened next. She poked him again.

“Stop wriggling woman, unless you want to wake every inch of me.” His voice was husky from sleep, and the grumbling note in it was patently false. “It’s barely daylight. Time for a snooze and then wake up and play. I need rest, you wore me out.” He didn’t sound at all concerned, more the opposite.

“We need to talk,” Sybille said. She tried to twist around to look him in the eyes, but Thom merely sighed, yawned and tightened his grip.

“Oh lord,” Thom, and pressed a feather-light kiss on her neck. His breath was warm in the early morning air, and Sybille shivered.

“Cold? I can help.” Thom purred the words. “I seem to have been woken up and now I’ve got an appetite.”

She wriggled a little more. “Well, something’s woken up.”

Thom had her on her back and had moved over her so fast she hardly had time to blink.

Sybille opened her legs and welcomed him inside her. The warmth of his staff in her, his body around her and showing her what she meant to him, was oh so welcome. She met him thrust for thrust, reveling in the way his breath became increasingly choppy and his skin dotted in perspiration.

Thom stiffened, the corded veins on his arms standing out as he did his best to stave off his climax. As her own climax crested and threatened to break, Sybille tightened her inner muscles and dug her heels into his back.

“Good…ah…” She let her own climax peak and crash, as with one last thrust, he shouted his own completion.

It was several minutes before Sybille was able to think coherently once more. She realized that Thom was still slumped over her and although she reveled in how she could be responsible for the state he was in, she became ever more conscious of the state she was in. Pins and needles in one leg and a desperate need to use the chamber pot. Which luckily was in the bathing chamber.

If only she could work out how to get to it.