Author Donina Lynn joined me as a guest blogger last October, and she was so lovely that I just had to have her back!

Thank you having me here today! I’m so excited to be sharing my new release, Lose Control, with you!

Myles and Cassie’s story isn’t about wine and romance. Their journey is about finding love with someone who you not only click with personally, but physically as well.

Let’s be honest, when it comes to sex we all have our likes and dislikes, right? We have our preferences and what we’re willing to do. On the flipside, we also have that list in our heads of deal breakers that when mentioned make you want to run in the other direction because there’s NO WAY you’re giving that a try. Kink-meter has been officially been pegged, thank you very much.

Lose control is about finding that person you’re compatible and comfortable with. The one who has the same wants and desires, and is perfect for you both in and out of the bedroom. It’s about falling for someone who can love every part of who you are … even if some of those parts can be a bit naughty. 😉 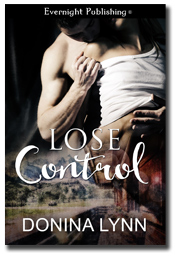 Myles Oliver Dayton likes control in every aspect of his life. He desires it, demands it in the board room and his bedroom. But when his teenage crush walks into his office to be his temporary assistant, the tight restraint he kept on his emotions starts to come undone. Something he couldn’t allow. His idea of love is demanding and possessive, and in the end there would only be pain—for both of them.

Cassie Sorrelson grabs onto opportunities when they come along and assisting Myles with all his demands is an opportunity she isn’t about to pass up. Sexy and controlling, he has her breathing hard and soon yearning for more than a few days together at the corporate retreat. When he suddenly pulls back, though, and refuses the desire she knows is running hot within him, Cassie is going to have to work at getting what she wants … making Myles lose control.

“What the hell are you thinking?”

The door barely clicked shut before Cassie let loose on Myles. By the time she’d walked down the steps and made it to the furthest room of the lower level—where hopefully neither Blake nor his lawyer could hear what most assuredly was going to be shouting—she’d mentally worked herself up to the boiling point. She was beyond pissed, and he was damn well going to know it, too.

“For a man who likes to proclaim he needs to be in control of everything, you sure as hell don’t show it.” Cassie couldn’t stand still. Her nerves and temper were prompting her to pace back and forth as she flung her hands around in the air, emphasizing her rant. “Did you happen to notice his lawyer? I could see the dollar signs light up in his eyes when you lost it up there. He was just waiting for you to make a move. Ever hear of a lawsuit? You were about an inch away from getting one slapped on your ass. And over what? Because you thought my honor needed protecting? I neither want nor need any protection or help from you.”

Cassie stopped, planted her hands on her hips, and tapped out her annoyance with her foot while she stared at him. Waiting. For anything. Any type of reaction…at all. Of course, there was nothing from him other than the stoic, stern look on his face. The man was insufferable and she’d probably have better luck trying to beat an answer out of a rock.

“For Christ’s sake, Myles, say something.”

“He will treat you with respect. No one talks to what’s mine like that.”

“Mine?” Cassie shouted at him. “Now all of a sudden I’m yours? A few hours ago, you made it clear you didn’t want me and now I’m yours? I’m nobody’s but my own person. Let me make myself clear so there will be no misunderstandings between us. I can speak for myself, fight my own battles, and handle someone like Blake. And who says I don’t want to go with him? If I want to fuck him, the lawyer, or every man in the whole state of Colorado, I damn well will. You gave up the right to have your opinion heard the minute you pushed me away.”

Tears stung the back of her eyes, and Cassie headed for the door before all the anger, frustration, and hurt threatening to pour out ran down her cheeks like a river. Grasping the handle, she threw over her shoulder, “You have no say in what I do or don’t do.”

Donina Lynn lives in a small rural Pennsylvania town with her daughter and German Shepherd.  Coincidentally, it’s the same town where she grew up.  There was a time, however, when she ventured away from her home and moved around a bit, crossed a few state lines, and got a degree or two.  But, eventually she found her way back to where it all began.

When she’s not at her day job, hanging with her family, curled up with her Kindle, or typing away at the computer, you can find her infront of the TV watching anything paranormal, sci-fi, or a good action flick.  Respect and admiration go to any show or movie that can incorporate explosions, big guns, some ass-kicking, and gratuitous butt shots.

Her addiction to romance novels started as soon as she could turn a page and has carried with her until she decided it was time to fulfill a promise she made to herself and give writing one a whirl.  Her goal is to create stories and characters that the reader can relate to, laugh with and have them routing for that happily-ever-after.  If there happens to be a few steamy scenes, well…that’s just an added bonus.

Find Donina on the web:

2 thoughts on “Lose Control with my Guest Blogger Donina Lynn!”