I have the lovely Ravenna Tate here today with book #7 in her fantastically sexy sci-fi series, The Weathermen. A Covert Conquest promises to be just as exciting (not to mention hot) as the rest of the series, so be sure to check it out! 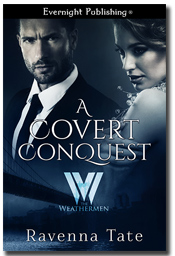 When Rissa Kerry overhears harmful gossip about the CEO of the company she works for, she makes a phone call to Barclay Hampton. What follows is the adventure of a lifetime for Rissa as she becomes Barclay’s assistant in data recovery from a laptop that might reveal the hackers of The Madeline Project.

But she never counted on falling in love with the CEO along the way. Will she become his next flavor of the month, or this is the real thing for Rissa and Barclay?

Barclay is part of a group of friends financing the efforts to put a stop to The Madeline Project. The program now has a mind of its own, thanks to a virus called Tommy Twister. These men have power, resources, and money, but they’re as ruthless and possessive as the storms ravaging Earth.

He stroked her palm, and when she didn’t pull her hand away, hope began to build. He wanted to push the emotion away and stop this, but he couldn’t. This girl had captivated him, and he was powerless in her presence.

“Why do you say that? Why do you think you need to?”

She gazed at him with dry eyes now, filled with clarify and purpose. “Because I’m ready to move on. I’m ready to start living again. I don’t want to dishonor his memory, but he’d want me to be happy and I’m not. I don’t mean in my work. I love my work. I mean…”

He sighed because he knew exactly what she meant. “You mean you’re lonely, right? Your days are filled with meaningful things to do, but then at night, when the fake sun goes down, the dark creeps in and you wish you could change everything about your life, but you don’t know how or where to start.”

She stared at him as if he had lobsters crawling on his face. “How did you do that?” she whispered. “How did you reach into my head and nail it, just like that?”

“Because I feel the same way, Rissa.”

“But … forgive me, but you’re in the tabloids constantly. You’re never without a date.”

“It’s a ruse. I don’t want to be that person any longer.”

She looked really uncomfortable, glanced at the pitcher, which was nearly empty, and pulled her hand out of his grasp. Then she pushed her margarita glass away. “Guess we’ve both had enough to drink.”

“I’m not drunk. And I’m sorry if you feel I’ve said too much. You’re very easy to be with and talk to.”

“You talk to people all the time, Barclay.”

He took her hand again, unable to stop himself. He wanted this woman, and he knew she wanted him, too. He could feel it in the air, hanging between them, and it wasn’t the tequila talking. “Yes, I do, but there’s something about you that has me spellbound, Rissa.”

She definitely wasn’t drunk, but then neither was he, and as she pulled her hand away again and rose, he realized he needed to tell her that.

“Barclay, don’t misunderstand me. I’m grateful for the opportunity to work on this project with you, but I have no intentions of becoming your next conquest. I think we need to make some coffee or drink some water, or something. Then we should get back to work.”

She picked up the pitcher and their glasses, and he followed her into the kitchen. “I’m not drunk.”

He saw her back stiffen, and then watched her place the pitcher and glasses on the counter, but she didn’t turn to face him.

“You do, don’t you?” He spoke softly now, not wanting to frighten her.

“I’m not going to do this.” Her voice shook, but not from fear. She was as aroused as he was.

“I don’t want to conquer you. I just want to make love to you.”

“You’re worked for me almost a year. I do know you.”

She finally turned to face him, and his damn dick was so hard now it was painful. The look on her face made him want to hold her for the rest of his life.

“The last man I had sex with was Harry. That was over seven years ago.”

He hadn’t expected that. Barclay’s feet finally worked, and he moved toward her slowly. When he reached where she stood, he resisted the urge to simply pull her into his arms. Instead he placed a hand on each shoulder, and the shaky intake of her breath tugged at his heart. She blinked against wet eyes again, and he hoped like hell it wasn’t because she suddenly wished she was anywhere but here.

“Then I will be very, very careful.” 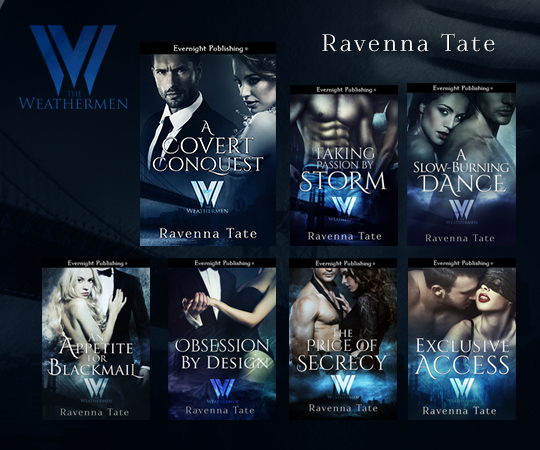 2 thoughts on “NEW RELEASE: A Covert Conquest by Ravenna Tate”