I have a delightful new series from Margaret Madigan to tell you about! Faerie Fate is the first in her Forever Faerie series and it’s now available from Evernight Publishing. 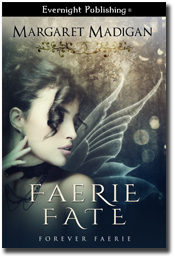 Holly Spencer is a 22-year-old IT major who’s ready to graduate and find her place in the world. What she really wants is a good job and a condo with a view.

But when she’s rescued twice in one day by a mysterious man who claims to be a fae warrior, she’s plunged into a world she grew up believing existed only in fairy tales, and forced to run for her life from warring factions who all want her dead.

Shadow’s on a routine mission when he runs headlong into Holly–the soul mate he’d given up on ever finding. Even though she refuses to believe they’re meant for each other,  he fights to protect her from the very thing that brought them together, even when it means making a dangerous deal with Fate to save her life.

Holly struggles with being told who she’s supposed to love. Shouldn’t it be her choice? But as little by little Shadow kindles her passions and wins her trust, Holly realizes that a life with Shadow may very well be just where she belongs.

She still had to face the things that caused her fear, and as much as Shadow made her feel safe, she couldn’t quite let go of the responsibility of taking care of herself. She couldn’t in good conscience give him any hope when she had no idea what she faced in the next few days. That kind of trust required more than she was ready to give just yet. Still, resisting the temptation to give in to their attraction was becoming more and more difficult.

“I know you’ll do everything you can to protect my life, and if I survive this mission, we can talk about my heart,” she said, resting her head on his chest.

“You’ll survive,” he said. “I’ve already saved you twice. I’ll do it as many times as I need to.”

“As I recall, the last time it was a team effort,” Holly teased. “If I hadn’t shifted form, you wouldn’t have been able to carry me away.”

She heard his laugh rumble in his chest. “Very true. That just proves what a good team we are.” He pushed her back just a little to look her in the eyes, “And as I recall,” he said, a wicked grin spreading slowly across his lips, “the last time I saved you, you wore nothing but a smile. Is that going to be a habit?”

“You wish. What does that have to do with anything anyway?”

Still holding her close, he traced the line of her dress, down one shoulder, across the valley between her breasts, and back up again, making her shiver.

“Nothing. I was just thinking how impressive it was.” 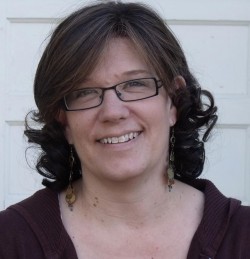 Author of romance and science fiction with Entangled Publishing and Evernight Publishing.

When I’m not writing you’ll find me in a college classroom teaching English, or working as a literary agent for an amazing agency…and of course, wrangling my family.