Today I’ve got an exciting new release for you from Kelsie Belle! Jayson’s Redemption – the sequel to Playing for Keeps – is now available from Siren BookStrand. 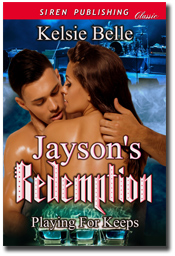 Jayson Tacoma has sworn off love and relationships ever since an unfortunate incident with his best friend leaves him emotionally scarred. That was until fate causes him to cross paths with the mysterious Mya Delgado, who appears in the small town of Bailey Springs seemingly out of the blue. Soon, he finds himself struggling with his overwhelming attraction to yet another dark-haired beauty and the two get caught in a game of cat and mouse that neither of them can control. Will getting involved with this woman, who harbors so many secrets, turn out to be another devastating mistake for him? Or will Mya Delgado finally be Jayson’s redemption?

The female voice came from his right, followed by the resounding slamming of a car door. The sound dragged his attention to the red coupe that was parked at the very end of the row of parked cars he had just passed. In an instant, his class was forgotten, so was the fact that he was late because, at that moment, his eyes had fallen on one very nicely rounded ass. It was conveniently turned upward for his perusal as the owner bent over to check out whatever was wrong under the hood of her car. Unbidden, his wayward eyes traveled downward, to inspect the shapely pair of legs that were attached to that fine ass. They were covered in skin fitting jeans at the moment but he could only imagine that they were just as tasty as the ass was.

Just then, the owner of the sexy ass and legs straightened, allowing a curtain of thick, dark hair to fall over her shoulders. “Damn you, you piece ‘o shit!” potty-mouth said, kicking the hood of the car for good measure, then screamed, hopping on one foot, “Ouch! Dammit.”

A rumbling chuckle escaped him. He couldn’t help it—her display of frustration with the poor car was hilarious although it was also cute as hell. “Hey! Easy there, killer,” he called out to her, turning off his designated path and heading in her direction. “What seems to be the problem?”

The hopping ended as soon as he spoke and she spun in the direction of his voice at the speed of lightning. As he neared her, he could see the hint of a flush that tinted her lovely caramel skin. Clearly she hadn’t known she had an audience. “Ah, hi,” she said, shoving her hands into the pockets of her jeans. “Did you…did you hear that?”

Jason grinned. “Sure did. Poor car didn’t stand a chance.”

A soft chuckle erupted from her lips, drawing his attention to the full, lip-gloss covered pair. Damn! He thought. Lips like those could bring a man to his fucking knees without even trying.

“Sorry ’bout that. Stupid machine always dies at the wrong moment. Just pisses me off, you know?”

“Yeah, that blows. Mind if I take a look at it?” Tossing his back-pack to the ground, he began moving toward the hood before she had a chance to respond.

“Um, I guess so,” she said noncommittally. “Knock yourself out.”

It took him less than five minutes to locate what was wrong with the car. He wasn’t a mechanic but he’d literally grown up inside a garage because his father had always been into cars. The older man had taught him a thing or two about working his way around an engine.

He glanced over his shoulder, chuckling a little when he noticed the bafflement on her pretty face. “Nah, you’ll live,” he assured her. “I’m gonna go get my tool kit, though. Be right back, okay?”

She nodded as he jogged off in the direction of his car. Ten minutes later, he’d patched up the valve but he knew it probably wouldn’t hold very long the way it was.

She hopped behind the wheel and was soon cranking the engine. It rumbled a little then sputtered to life.

“Yes!” she fairly shouted, hopping out of the car again without shutting off the engine. “Oh my God, you’re a life saver! Thank you so much.”

Jay wiped his hands on the rag he kept inside his tool kit, then closed the hood before turning to her. Damn, but she was a stunner. The gentle breeze played in her hair, causing it to whip against her cheek like a drape of dark silk. Her peculiar hazel eyes gleamed like cut glass in the stark sunlight, making him feel as though he could see her soul in their depths.

“Hey, don’t sweat it,” he said, trying to shake the uncanny feeling that had come over him as he stared into her eyes. “It was no problem at all. You probably shouldn’t drive it too far like this though. I’m not sure if what I did will last very long.”

She stuck her hands into her back pockets and grinned sheepishly. Unbelievably, the gesture made her even prettier. “Don’t worry, I won’t. I’ve got an interview a few blocks from here that I need to get to but right after that this piece o’ junk is headed straight to the shop.”

“Yeah? I thought you were a student here.” He was more than a little disappointed and the statement came out sounding more like a question.

“Oh, yeah, I am. Some of us just have to work to pay our way, you know?” Her words were flippant and she tried to seem all blasé about it, but Jay could tell she wasn’t as comfortable about it as she wanted him to believe. But then, he could totally relate to that situation. After all, he was one of those people.

He offered what he hoped was a reassuring smile and extended his hand. “Welcome to the club, sweetheart. I’m Jayson, by the way, Jayson Tacoma. Or just Jay if you like.”

She glanced down at his hand briefly, as if not sure what to do with it. Then he felt velvet soft skin sliding against his as she wrapped her fingers around his much longer ones. “Hey, Jayson, or Just Jay,” she joked, returning my smile shyly. “It’s a pleasure to make your acquaintance. I’m Samya Delgado, but just Mya is fine.”

Kelsie is wildly gregarious by nature. She considers herself ‘forever 21’ and enjoys reading contemporary romance, Science fiction and fantasy, listening to music and dancing like there’s no tomorrow. A caffeine addict that lives life from one coffee mug to the next, she’s always on the go, ready and waiting for the next adventure.