Happy Hump Day! Today I’ve got a sneak peek at Systematic Seduction, book nine in Ravenna Tate’s futuristic The Weathermen series. This one promises to be every bit as steamy as the rest of the series, so you don’t want to miss it! 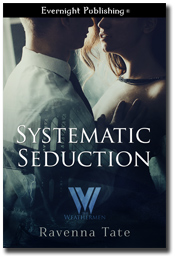 Biosystems engineer Blair Adams has worked for Oliver Fairchild, CEO of Fairchild BioSystems, for seven years. And for the past two years, she’s turned him down every single time he’s asked her out. Blair has more than one secret from her past she prays will stay hidden. If Oliver discovers them, she risks losing more than her heart to her charismatic, sexy boss.

Oliver is part of a group of friends financing the efforts to put a stop to The Madeline Project. The program now has a mind of its own, thanks to a virus called Tommy Twister. These men have power, resources, and money, but they’re as ruthless and possessive as the storms ravaging Earth.

When Oliver returned he was barefoot, and she moaned softly. There was something so damn sexy about a barefoot man. He dumped a box of condoms and a bottle of lube on the table next to the sofa, and then he grinned in a way that had her pussy wet all over again.

He kissed her again, rougher this time, but she didn’t mind at all. He was so fucking sexy in the way he moved his mouth over hers. When he released her mouth and planted kisses along her neck again, she pushed her body against his, desperate to be skin to skin.

Oliver pulled off her top, nuzzling his face between the cups in her bra. “This is very pretty, but it needs to go.” He unhooked it with one hand, forcing another soft moan from her at the expertise of his gesture, and then he pulled it off her and tossed it onto the floor. “I knew you’d be fucking exquisite. I just knew it.”

No one had ever called her body exquisite. Fat, yes. Lush, definitely. Curvy and full were both used alongside not so thinly veiled suggestions to lose a few pounds so she’d be healthier. But exquisite? Never.

He grasped her breasts and teased the nipples with his teeth and tongue, taking turns, making such satisfied noises in the back of his throat that she was sure she’d cry from happiness. She’d never had this experience before. This worshipping of her body as though it was meant to be treasured, not merely taken and then made fun of, or picked apart and critiqued.

He looked into her eyes tenderly. “For what?”

“For being like this. For making me feel so … so wanted.”

He brushed a finger along her face, sending shivers down her spine. “Oh, Blair. I do want you. I’ve wanted you for a long time. You’re beautiful. I mean that. It’s very hard right now to hold myself back. I’m dying here.”

She swallowed hard against the lump in her throat. “So am I. In a good way, I mean. I’ve never been this turned on.”

His sweet, sexy smile sent fresh arousal racing through her. He licked her breasts again, paying attention this time to the undersides, and then he pushed her down until she was on her back, and peeled off her Capri pants, panties, and sandals. He sat back on his heels, his gaze traveling lazily over her, the same smile still on his face.

“Damn. You’re more beautiful than I pictured.” He took his dick out of his jeans and pulled on it. “I don’t know where to go first.”

Blair’s mouth opened, but no sound came out. She watched him stroke his cock, mesmerized by the length and width of it. Red, swollen, and glistening with pre-cum already at the tip, it grew in his hand. She couldn’t stop staring at it. Oliver pleasuring himself this way, like he did it all the time in front of people, was the sexiest thing she’d ever seen.

When he released his dick, he moved his hands over her thighs, up and down, then gently spread her legs. He turned her torso toward the edge of the sofa and sat on the coffee table, his cock still free, and licked her inner thighs.

Blair cried out loudly, the desire climbing to crazy levels now. With each pass of his tongue, he moved closer to her labia, until he licked them, too. She whimpered softly as he teased the opening to her wetness with a finger, and when he slid it inside her pussy, she clamped down on it, trying to make herself come.

He made soft noises in the back of his throat as he licked her clit, over and over, while moving his finger in and out at the same time. “Oh, baby. You taste like heaven.” 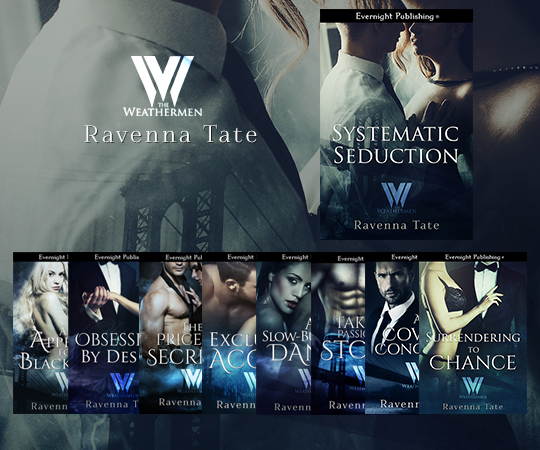