Happy Monday everyone! I’ve got the lovely Raven McAllan’s dark counterpart, Kera Faire, here to kick off your week with a look at The End Game, book #3 in her awesome Death Isle series…

Hi all this is Raven’s alter ego, Kera Faire with my new book, The End Game – Book 3 in the Death Isle series.

Kera is Raven’s dark side. Or as her bio says…

A Scottish-based author with the love of the unexpected, Kera writes stories to make your heart miss a beat. Living in the land of the spirits helps her to get in the right frame of mind and find light in the dark side of life.

Let’s hope you think The End Game does just that! 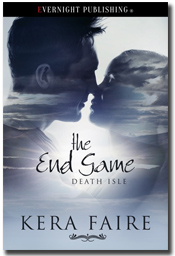 As an undercover operative, your life is not your own and you can’t trust anyone.

Emma MacKay is only too aware of that, but it still sucks when you have to take out a friend’s fiancé, because he’s suspected of being a traitor.

Milo Dorn is more than an undercover operative. He’s one of the dispatchers, secret killers for the department.

When someone is feeding his pigs fresh meat he needs to find answers.

What he finds instead is the woman of his dreams. While the sex is mind blowing, and makes him want to throw away the rule book, he cannot forget the first rule of the game.

When the truth comes out, can Milo and Emma find a way to each other, or are their jobs an obstacle to high to overcome?

The End Game is on.

“What sort of person accepts what’s going on and makes the best of it?”

That made him grin. “Yeah. So go on, sweet cheeks, what next?”

She bit her lip and looked pointedly at her ankles where her trousers and underwear were in a crumpled heap. “Take off my shoes and trousers for me and I’ll show you.”

That seemed reasonable. Milo tugged and pulled where necessary until she was as near as dammit naked. Now he had a chance to look at her closely, he could see red patches where he’d rubbed his stubble over her soft skin. Her bra and t shirt were pushed up and her luscious breasts with puckered nipples called to him like a siren.

He traced one red patch gently. “Shit, sorry, I guess I was a bit rough.”

She nodded. “Just a bit, but did you hear me complain?”

Okay so what next? “Over to you, sweet cheeks. It seems you’re the one directing the traffic.”

“You better believe it,” she drawled and closed her legs. Disappointment stabbed at him, until he saw the speculative expression on her face.

She dipped her head. “Not pet, I don’t bark or meow, just purr on occasion.”

She sighed, very dramatically. “If you must. Put your leg either side of mine, not too close, lean back and think of Scotland.”

“What?” Now he was puzzled. Excited, aroused, but puzzled.

She tilted her head “Are you chicken, Sir?” She clucked and he burst out laughing.

“Nope. Okay.” He did as she bid and found himself with his cock between her feet before he had a chance to say ‘what’s next?’.

“Now this.” The soles of her feet encased his cock and slowly began to move up and down his hard length.

Milo swore his eyes crossed as she varied the speed and depth of her strokes. Why had this never happened before? Fucking hell her feet moved in such a way his pre-cum covered them within seconds.

Stroke, sigh. “Ah that is so good to do. Oh my. Better to fe… ah sweet jesus.” Somehow she’d nipped his foreskin between her toes, just enough to sting. “Bloody… sweet cheeks you’re killing me here.”

“No … not yet …  now more eh … like this…” Her words made little sense to him. Every fiber of his being was concentrated on those magic feet stroking his dick. Milo stopped thinking and let his climax roll through his overheated body.

“Sweet cheeks, you are a genius,” he said as soon as he had enough breath to speak. “I’ll never look at feet in the same way again.”

“I bet not.” Her toes tightened on him, and them she moved. “Sorry, Sir. I have no option.”

Milo didn’t even see it coming.