Sarah Marsh has some spicy sci fi to heat up the middle of your week! Check out her latest from Evernight Publishing, Precious Cargo. 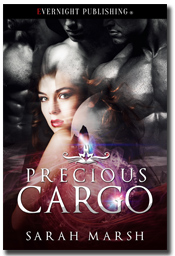 What would you do if you woke to find yourself confronted with an entirely new universe? Alison Baker deals with it the best way she knows how, one day at a time.

Alison wakes in the midst of a nightmare, complete with monsters included. She winds up being rescued by three alien males but when it comes to her future she’ll need to learn to open up her mind and her heart if she hopes to survive the virus that her kidnappers infected her with.

Clan Drogan are quite content with their lives and careers, when their ship gets attacked by pirates and they are forced to protect themselves, their spoils of war come in the most unexpected of packages. They’ve never met any female like Ali before, and her sweet and caring nature draws them to her like a moth to a flame. But they have commitments of their own when it comes to their future, will the three of them be able to decide once and for all if their intended mate back home is the right one for them? Or will they follow their instincts and see where their attraction to Alison leads?

Ali knows that Conn, Kal, and Tannen are meant for another woman, but she can’t seem to help herself when it comes to falling for the three charming men. They introduce her to pleasures she’s never even imagined; how could just a taste ever really be enough? When they finally arrive on the men’s home planet of Dolak, she sees first hand that her competition for their hearts is fierce and not about to go away quietly.

Will she find the strength to stand up and fight for what she wants?

Kal had been trying all morning to get some work done, but his mind kept wandering back to delectable little Ali, and eventually he just quit what he was doing and went to track down her and Conn to see what they had gotten up to. He certainly hadn’t been expecting to find what he had when he’d walked into the observatory, but the sight of the two of them half naked, kissing on the couch brought his cock to full attention in a matter of seconds.

“I see I’ve arrived just in the nick of time.” Kal smiled as he walked up to the couple and ran a finger gently along Alison’s flushed cheek. “Is there room for one more?”

He loved the way her blush got brighter as she bit her lip and nodded yes to him. Conn lifted his head from nibbling on her neck, and Kal slowly leaned in to take the other man’s mouth in a sultry, deep kiss. Alison’s breathing became even more rapid and her eyes went heavy with lust as she took in the scene before her.

Kal had his suspicions that Ali would enjoy seeing him with Conn and Tannen, and it seemed he was correct. The aroma of her desire was filling the room, causing their own pheromones to increase in return. Their sweet little Alison couldn’t have been a better match for them if she’d come straight from their wildest fantasies. It seemed that his plan to convince his two bond mates of that fact was coming to fruition without much interference from him at all. He stopped for a moment to watch as Conn continued to grind himself against the woman below him, drawing sweet whimpers from her lips.

“Get naked and get over here,” Conn said to him after he broke the kiss, and returned to torment Alison with kisses on her neck as Kal rounded the couch and began to undress.

Just as last night, Kal could feel her eyes roaming over his skin as he took off his clothes, and a thrill went through him at the thought that she admired what most of his people saw as a defect. The only other two beings in his life that had ever looked at him that way were Tannen and Conn, and once he’d found them, he’d vowed never to let them go.

Kal loved the sound of her gasp as he took his briefs off along with his pants this time, revealing his long, hard cock that was aching for both her and his Captain.

“Isn’t he beautiful?” Conn whispered in her ear, as they both watched Kal undress, with rapt desire. “It always takes my breath away to see the contrast of his skin against my own.”

Ali looked from one to the other, a slow smile forming on her beautiful lips, and Kal could only hope that she was imagining them entwined in each other’s arms.

“He is,” she finally agreed on a sigh, as Kal finished and moved towards them.

Conn finally released her arms, only to move his hands down her torso, and he began to slowly raise the shirt that had been covering her.

“May I?” Conn asked, looking deep into her eyes for permission to remove the barrier.

Alison was so enthralled by the directness of his gaze that she simply nodded in agreement, biting her lip again once the shirt was removed and she was naked to them.

“Ah, no biting, lovely. That’s our job now,” Kal said as his eyes dropped to her mouth and he knelt in front of them both. “I’ve been dreaming about these lips.”

By the time he leaned in and pressed his soft mouth against hers, she could no longer hold back. She grabbed the back of his head and pulled him in for a deep kiss. He seemed to be surprised at first, but then she felt his hands move down to caress her aching breasts and he returned her kiss with exactly the passion and heat she was craving.

“You two are so sexy together,” Conn said as he claimed one of her breasts with his mouth, sucking her nipple deep into his warmth.

She could feel his still-covered cock lightly rubbing back and forth against her pussy. To have the both of them touching her at the same time was scrambling her senses with sensation overload. The harder Kal kissed her, the more Alison felt as though she wanted to crawl right into him, and she couldn’t help but slide her hands into his wavy dark hair to pull him closer. She felt her nails dig into his skin, but all she could do was moan and suck at his tongue wanting everything he had to give.

Kal pulled away, and Ali was bereft at the sudden loss of contact. When she opened her eyes and looked up both men were staring at her with such a look of hunger it took her breath away.

“Why did you stop?” she asked desperately, panting hard.

“Gods, Ali, you could burn me alive,” Kal said in a low growl. “Why don’t we help our Captain out of his pants?”

Ali watched as Kal knelt on the couch behind Conn and began to nibble and lick on the other man’s neck, causing Conn to moan, his head falling back in pleasure. Kal took one of Alison’s hands in his own and slowly brought it down to caress his bond mate’s chest and stomach until finally they found the closure to his pants and released it. Conn groaned loudly when both Ali and Kal’s hands reached inside and found his long, hard cock and stroked it together.

“Are you two trying to kill me?” Conn growled as he opened his eyes and looked down at their combined fingers gliding over his hard flesh.

Alison looked down at Conn kneeling between her thighs, his dark skin such a lovely contrast with Kal’s silver arms around him and the pale cream of her own hand wrapped tightly around his thick shaft. Their skin was a slightly different texture than hers. It was almost like a soft velvet, and she couldn’t stop wanting to roll her entire naked body against them both.

The pleasure was so decadent, she almost felt high just from touching them, especially with their combined scents playing at her senses.

“You need to take the pants off, Conn,” she said, tightening her grip on his cock and stroking it slowly, gratified to see a small bead of moisture collect at the tip.

“As you wish, my lady,” Conn said, before leaning forward to kiss her and then climbing off the couch to remove the last of his clothes, leaving him just as naked as she and Kal.

Alison was distracted watching the thick muscles of Conn’s well-toned body as he stood back up, and then she felt Kal’s hands move along her thighs and open her legs further as Conn laughed out loud.

“You bastard!” Conn teased. “I knew you would steal my spot!”

Sarah Marsh was born in British Columbia where she still lives, she has only recently began her writing career finding it the perfect outlet for taking the edge off a nine to five office job. She’s been a science fiction and romance junkie for years and when her imagination started to take the characters she’d read about even further in their adventures she decided to try writing something of her own.

Sarah’s also a former pastry chef and spends a lot of time cooking and baking for friends and family as well as painting and knitting. Her biggest weaknesses are animals of any kind…she even loves the ones that wake you up at four in the morning because they can almost see the bottom of their food dish.

When it comes to life in general she’s a big believer that laughter is the best medicine and that there’s no such thing as too much love, which is why she’s such a sucker for a happy ending.