If you’re a fan of historical romance then this wee gem will definitely hit you where you live. Its absolutely delicious introduction to Henry and Richard (I am such a sucker for awkward/virginal characters) will draw you into their world and keep you riveted. Their story was sexy, romantic… and, more importantly, incredibly believable. What I really enjoyed with this story were the fully realized secondary characters who provided the perfect amount of foil and angst without becoming caricatures or unnecessarily over-the-top villains; they were, instead, delightfully human.

One Indulgence by Lydia Gastrell 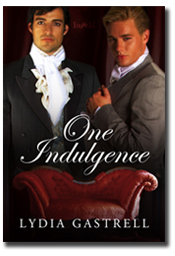 When Henry Cortland, the Earl of Brenleigh, comes to London to fulfill his duty and take a wife, he also decides to first fulfill his most secret and suppressed desires. He wants to spend just one night with a man. A sultry encounter with a handsome stranger surpasses all his hopes, leaving him certain that he will live off the memories for the rest of his life.

Lord Richard Avery has grown tired of his endless string of casual relationships, yet an argument with his lover sends him right into the arms of a total stranger. But Henry is not like any lover he has ever had, and the attraction between them is more than physical. Richard wants more, but can their mutual attraction overcome Henry’s family obligations and sense of duty? Can Richard convince him to follow his heart rather than the demands of family and title?

*A free copy of this book was provided in exchange for an honest review.