Welcome to the weekend, everyone! I’ve got a treat for you today – a sneak peek at April Zyon’s Revealed, book #2 in her Warriors of Light series. Check it out! 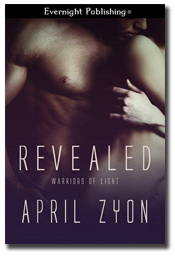 Hector is a born warrior and protector. But in the war against evil, he cannot fight alone. While he has his brothers-in-arms by his side, a new element is necessary for this battle. That’s when he finds Riley, and he realizes dreams can come true—even for one cursed to walk forever throughout time.

Riley Jensen is sensitive to lies—the lies others tell, and any she has ever tried to tell. Seeking out sanctuary behind thick walls is her only escape from the pain. Except now it appears she might be the hunted. Not one to sit back and wait, she goes on the offensive with the help of a powerful warrior.

As the danger grows thicker, lies will blend with truth. Only Riley can discern fact from fiction with her gift to keep all the warriors walking the true path.

This is a previously published work. It has been revised and edited for Evernight Publishing.

He slid a finger down her cheek. “The bond is strong, especially when the woman you care for carries something so amazing and precious within. When she is your other, better half, you need to be close to her in the hope that some of that goodness will rub off on you and help to lighten the load we all carry.”

“And you’ve found her?” Damn him for making me ask. She leaned into his touch, all but purring when he stroked his finger down her cheek again. She was as close to him as she could possibly get, her hand resting lightly on his chest as she looked up at him. “Tell me,” she whispered. She had to know that she wasn’t alone in this feeling, that he was as attracted to her as she was to him.

“I did,” he answered. “She is an amazing beauty, a pure and kind soul, elegant, poised, and much too good for a warrior like me. She could have any man falling at her feet, yet she seems to have taken an interest in only one. For which I am grateful.”

“I have a feeling that she would move heaven and earth for you,” Riley admitted quietly, her face turned up to him as she spoke. Licking her lips, she all but shivered at the need that was in his eyes. “I really think you should kiss me again.”

“I think you may be right.” His arms came around her, pulling her up close to his chest, and his head lowered. But he didn’t kiss her immediately. Instead he brushed his nose over hers, then over her cheek. As the anticipation began to build to a nearly explosive point, he finally pressed his lips to hers in a hard, demanding kiss.

Riley gave in completely to his passion. She wrapped her arms around his neck. Her hands fisted into his hair. She shuddered and opened to him, his tongue brushing over hers before he took full control. He was dominating her in that moment, and she was fully willing to allow it to happen.

Hector’s arms tightened around her as he bent her back over an arm. One hand was soon up in her hair, holding it tight. His mouth devoured hers, and he let out a low growl that shot through her entire body.

Then his lips were gone, but his heavy and hard breathing was still a hot brush over her skin. “We should talk first,” he said, his voice not entirely steady.

Riley nodded and moved so that she could hug him. Her feet were off the ground, and he was keeping her up, but she was fine with that. She pulled back and smiled teasingly. “You running from this?”

He huffed out a breath. “It’s called a strategic retreat, for your information. It’s either that or I have you naked, on the table, with my cock buried inside of you, without a care for the fact that there’s someone else in the house with us. We need to talk before we do anything like that. You need to know what’s going on, and I made you a promise.” Stepping back, he grabbed one of her hands and tugged her up the stairs and down the hall to the room they would be sharing.