Happy Friday, everyone! Let’s start the weekend with something from the lovely April Zyon, shall we? I’ve got book #5 in her Warriors of Light series for you today. Check out Hacked! 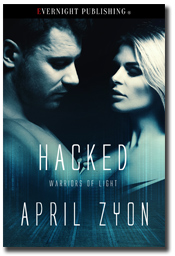 Holly Smith has always had a certain affinity with computers. By day, she strengthens Internet security for corporations. By night, she’s a hacker. When she hits upon what she believes to be an author’s unpublished manuscript, she finds herself reading about a world where warriors of old wage war against a dark force bent on consuming everything it touches. Then she finds out it’s all true.

Demaratus of Corinth has seen a lot during his lifetime. And while many things prove useful, he finds technology to be a greater hindrance than a help. Sent to find the hacker who managed to penetrate their base’s security, he is stunned to realize who she is to him. As the darkness closes in on them, Demaratus and Holly will have to battle to survive not only the coming fight but the war that is gaining momentum.

She nodded and stood. She watched him as he watched her, taking her time. “Do I call you ‘Sir’?” She whispered the question. “I saw that in a movie. The Dominant ensured his submissive’s pleasure, and she called him ‘Sir.’ Is that right?”

“Only if you are comfortable with it. You can use my name, or that ridiculous nickname you’ve come up with, if you think it would be easier. I am not your Master and never will be. While I will be your Dominant, and you my submissive, this is always going to be an open relationship where we make our own rules. So go with whatever works for you, little warrior.”

She went to her knees, her hands behind her back and knees braced apart. Her head down and tilted to the side, she shuddered in need. “I think that I’m going to love you, DC. For the rest of your life.”

“Seeing you like this makes me wonder what sort of movies you’ve been watching,” he commented. She saw his feet move and in the next moment his fingers under her chin brought her face up. Leaning forward, with his elbows on his knees, Demaratus regarded her with what she could only assume was curiosity. “What else have you learned?”

“I’ve watched bondage movies, spankings, blindfolds, all of them with the woman submissive to the man. I like that. I think that I’ve learned how to give a blow job, but I don’t know, since I’ve never— Shit, there I go again.” Blurting out everything in my mind. Bloody brilliant.

“Sucking a man’s cock is something not every woman likes. Some love it, some do it out of a mistaken sense of duty, and others hate it but do it because they believe it is the only way that they might get fucked themselves. That’s not what we’re about. If we try something and you realize your expectations outshone the actual attempt, then we will never do it again. Now, what would you like to try first, little warrior?”

“I would really like to try the blow job, please? Sir.” She had never wanted to do anything so much in all of her life like she wanted to take him into her mouth.

Rubbing his thumb lightly over her chin, he nodded, then leaned back. Demaratus slouched slightly and studied her. Reaching down, he undid his belt and the buttons holding his fly closed. He lifted his hips a bit to push off his pants.

She smiled. “Do you know just how much I love the way you look at me like that? How do I do this?” She asked the question even as she licked her lips. “I don’t want to hurt you, but goodness, my mouth is watering.”

Having been a lover of the written word all her life April has always wanted to expand her horizons and write something that could be shared with the world. Only one thing held April back, the fact that the letters and numbers mixed and jumbled more often than not. Diagnosed with Dyslexia when she was eight years old April had to work her butt off just to be able to keep up with the other kids in reading and writing, so her love for fictional writing was tossed to the wayside for the moment.

Time marched on, as it always does, and she forgot her childhood dream of becoming an author and instead focused on what she had to – creating a career for herself.

As the endless waves of time passed the shores became less rocky and more sandy, a place where she could find an even foot. That and Microsoft invented Word. Hallelujah.

This is where April began her journey into the written world, the world that her imagination had been ceaselessly creating for her entire adult life.

Now she has been given a chance to let her literary wings unfold and fly, thanks to the amazing publishers with Evernight Publishing and Secret Cravings Publishing.

Now its time to let the dream take flight and watch it soar!