Happy Friday, everyone! Today I’ve got a treat for you from the lovely Kacey Hammell. Stirring Up Glory is the second in her Stirring Up Love series, and I’ve got a spicy little teaser excerpt for your reading pleasure!

Stirring Up Glory (Stirred by Love #2) by Kacey Hammell 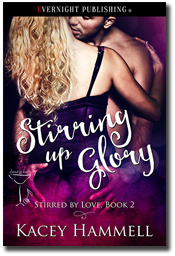 Shaken and Stirred with a splash of dirty.

She’s not the one he wants…

Drew McKenna is obsessed with the woman who saved his family’s business. She’s the last woman he should want, but his dreams are flooded with the sultry, sexy woman who gets under his skin. He’d not prepared to end their lengthy riff just so he can give into his desire to have the gorgeous woman under him.

But she is the one he needs…

Glory Pierce gave up on Drew the second he flung vicious insults her way. The harder she tries to forget how deep those scars run, however, the more he invades her thoughts. When tragedy strikes, Glory is forced to put aside her anger and work with the man she despises. But as they mix business with pleasure, the heat between them reaches fever pitch, secrets are revealed, and passions are stirred up in ways neither of them can ignore. 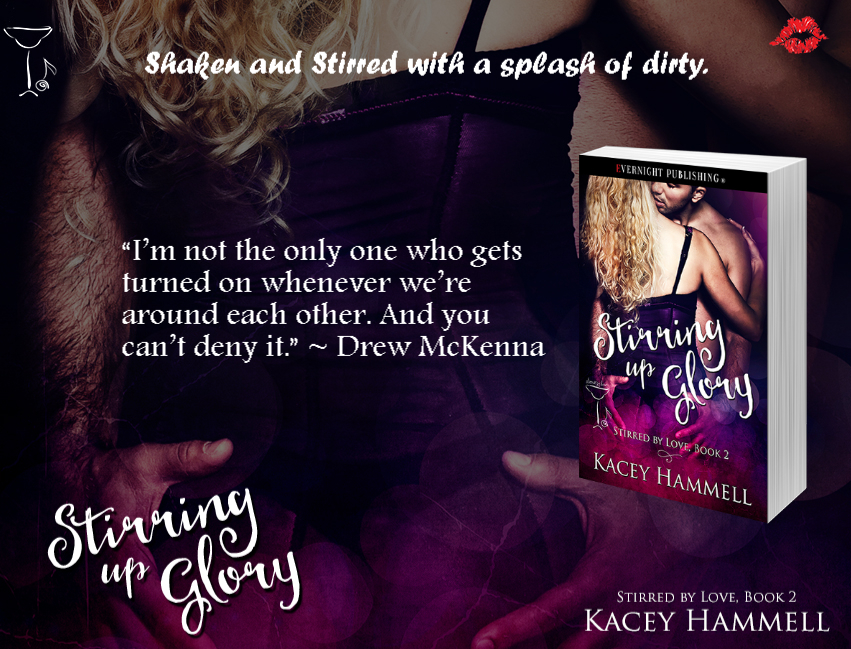 Glory exited her father’s room and leaned against the wall. Drawing in deep breaths, she closed her eyes and kept the tears at bay. It was so strange to see the strongest man she knew so vulnerable. Her father worked day in and day out with little time off. It was hard to equate him to the man in that room. Though Dr. Cooper had tried to sound optimistic, her gut told her otherwise. Her father might not make it and she had to reconcile herself to that fate.

She adjusted her duffle bag on her shoulder and headed toward the front exit. There was nothing for her do tonight and sleep was her best recourse. The next few days would be full of tasks she wasn’t ready to handle. But he’d left her in charge—for whatever reason—and she’d do everything possible to handle his affairs until he recovered. And she had to hope that he’d recover. But she didn’t like the thought that she could screw something up and he’d have to fix later.

Sadness and panic churned in her stomach at the possibility of losing him and what she’d have to face with the family either way. Most of the Pierce family thrived on drama and conflict. She’d escaped it when her folks divorced, but growing up, she’d still spent as much time with her father as he allowed. They didn’t always have the best relationship, due to the chaos Freddie and Tanya preferred to create whenever she was around, but she loved him. And she never questioned his love for her.

Her father had always been transparent in his views of her. He’d never had faith in her to carry on the tradition of the men in her family to become mayor, but he’d done his best she supposed. Every first-born child of the last five generations was male and she was an anomaly by the way her family carried on. And since they held the mayor occupancy in town, no one ever let her forget that she’d broken the lineage and would never carry on that importance. It wasn’t a shoe-in whenever there was an election, but for generations, her family held the most power in town. It saddened her that Freddie was the only one left now to task the job to. And his troublemaker ways and disregard for anyone but himself and his mother, did not go unnoticed. Most of the town prayed there’d be another person to go against Freddie if her father was no longer able to hold his post. There wasn’t much to be happy about with that scenario.

As she stepped outside, she breathed in deeply, filling her lungs with fresh air, and rolled her shoulders to relieve the tension. As always, her stepmother and the gossipmongers of her family never ceased to stress her out. She avoided every family gathering for the sake of her sanity, which always irritated her father. But, it was her only salvation against the nosey-nellies who never kept their noses out of her business.

Her heart rate kicked up a few notches. The last thing she needed was more of Drew McKenna tonight, dammit. Raw from the long-buried emotions about her father, having him around could only cause more chaos. And the usual heartache.

But damn if he wasn’t hell-to-the-oh-my-god sexy as he leaned against his Harley. Arms crossed, biceps bulged beneath the sleeves of his t-shirt tucked into the waistband of his blue jeans. It appeared multiple finger swipes pushed his hair back to maintain the untamable ringlets that fell over his forehead and curled around his ears. Those sexy strands were one of the best things she loved most.

Love? Ugh, as if, lady. Speak for yourself.

Glory shoved the nagging voice away, unwilling to handle such nonsense tonight.

“Why are you still here?”

He shrugged. “Thought I’d offer you a ride home.”

“I don’t need your charity, Drew. Since when do you care what I do?” As soon as the words left her mouth, she wanted to eat them back again. Like a bull poked, his nostrils flared as usual and reminded her that their tumultuous but civil relationship always ended in an argument. And too much resentment.

“Let’s not do this again.” Drew stood, and waved a hand at his back seat. “You’ve had a long night, you’re worried for your old man, and I’m too damn exhausted to go toe-to-toe with you, Glory. For once, please shut up. Can we put aside whatever keeps us at one another’s throat for one night?”

Surprised, her jaw fell open and her eyes widened. Had Drew McKenna sounded reasonable and mature? A foreign impression in the years she’d known him, but she supposed he had a point. Over a decade of combating with him was now tiresome. How she’d allowed it to go on for so long was ridiculous, but wearing her coat of armor against him was her only defense.

“Are you coming or not?” He sat astride the bike, a second helmet in his hand and extended toward her.

“I’m only doing this because my car is in the shop and too tired to wait for a cab. You better not get me killed on this contraption, McKenna. I swear, I’ll haunt your ass forever if you do.” Glory grabbed the helmet and placed it on her head, then adjusted the strap beneath her chin. She moved closer, made sure her duffle bag was over both shoulders was tight, and lifted one leg over the seat.

“You haunt me now, woman, but don’t worry, you’re safe with me.” The engine cut out many of his words and Glory wasn’t sure what he meant about haunting him, but she’d had to have heard him wrong. Her gut instincts knew better than to trust him.

“Ready?” he glanced back at her.

After a hard swallow, she set her hands at his waist. Her body shivered as his warmth curled around her fingers.

“You have to hold on tighter than that, doll.” Drew grabbed both her wrists and dragged her forward until her chin hit his back. She crossed her arms at the front of his waist and held on.

The bike vibrated beneath her as he gunned the engine and roared through the parking lot and into the streets.

Her nipples tightened beneath her bra as she rested against his hot back and his enjoyable rich aroma of sandalwood wafted into her nose. Glory leaned a cheek on his shoulder, closed her eyes and blocked out the buildings rushing by. His potent scent reminded her of one night, so long ago.

A memory that never stopped breaking her heart. No matter how much she tried, it played in her head over and over, when she least expected it and left her vulnerable and aching. With her forehead on his back, the vibration of the machine beneath her ass pulsed through her. Shit. A reminder of how long it had been since she’d been with a man was the last thing she needed. Though her dating life sucked and there had been a couple men in her life over the last decade, she’d hoped the heartbreaking memories would fade quickly. But the more she wished to forget the past, the less and less pleasure she found in dating because she couldn’t erase the memories.

During the nights at Controlled Iris—as she succumbed to her voyeuristic tendencies that appeased her well enough—never stopped her from going back again and again. The small solace of pleasure she sought there kept her sane with the unattended needs and hunger coursing through her often. One exciting night a decade ago had ruined her for life. She wanted the same thrill of pleasure and the powerful delirious ecstasy again. But it was unattainable.

Though she had no trouble getting herself off, Controlled Iris pushed her harder and drove her faster to the edge of pleasure for when she returned home. Role playing and the uninhibited prowess of each person, men and women, showed her more about sex than she’d ever thought possible. One night of pleasure did not make her an expert in any way, and CI filled her curiosity.

She lifted her head when the bike came to a halt. So lost in her thoughts, she’d missed the short ride home. Drew shut off the engine. He slid off the bike, undid the helmet and handed it to him. He scooted back and got off.

“No need to stick around.”

“Not even a cup of coffee to repay me for going out of my way?”

Glory rolled her eyes and started up the porch steps. “You don’t drink coffee and I didn’t ask for the ride, you offered. Good night, Drew.” As if fire chased her, she hustled to her front door and stuck the key in the lock.

“We should talk, Glory,” his voice filled her left ear, and startled her. She whipped around, and found herself pressed against the door. Shit. She didn’t need to get trapped by him tonight.

“You’re too close. Back off. And we have nothing to discuss.” Body quivering from his closeness, she gazed up into his dark eyes. Lightheaded, Glory inhaled a shaky breath deep into her lungs. How evil was it to tempt her with such deliciousness when her heart and soul already ached from ripping emotions?

“Really, dude?” she scoffed. “That’s what you compare us to? Two gun-wielding married assassins who lie to one another? When have I ever lied to you?” Glory didn’t know if the comparison was accurate or not. They weren’t married, and they weren’t assassins either, but the sexual chemistry and tension between the Smith duo was always tumultuous and charged with chaos. She supposed there was justification for that comparison.

Drew crowded in on her, and she lifted her hands to his chest. Her knees shook as the heat of his skin beneath his shirt warmed her palms. The motherfucker didn’t play fair.

“I’m not the only one who gets turned on whenever we’re around each other. And you can’t deny it.”

Praise for Stirring Up Glory:

“A hot and sexy read.” ~ SJ Maylee, author of Assassins and Sweetheart series. 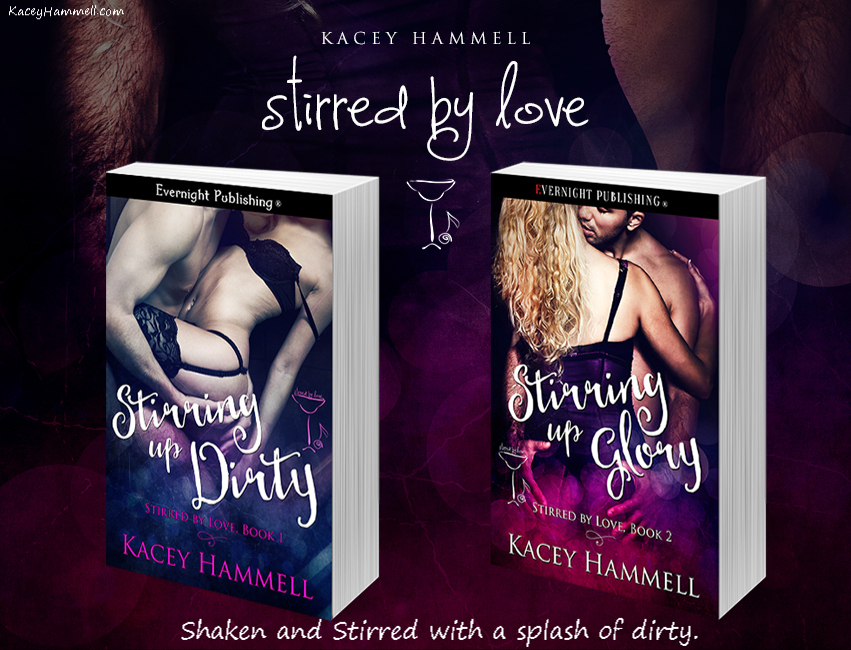 Book 1: Stirring Up Dirty – available at all online bookstores

Mom of three, Kacey lives her own happily ever after with her perfect hero in Ontario, Canada.