I have another fabulous guest on the blog today – the talented E.D. Parr, with a brand new title from Evernight Publishing: String of Pearls.

Thank you for inviting me to your blog today with new release MM romance, String of Pearls.

The story is set in the same SciFi fantasy city as last year’s release, The Dreamboat.

Indigo Vaughn, the warlock head of security, features in the story along with a new cast of characters. When I wrote The Dreamboat, I already had the new characters in my head along with their story. Tobias Mars and Dante Pepper, the elite space pilots for the royal court, very nearly made an appearance in The Dreamboat, but because that story is about Indigo at last finding love, I decided they needed their own story.

Once upon a time Dante and Tobias were close to becoming lovers, but Dante met Viridian and fell in love. Tobias has yet to meet his love when String of Pearls, opens. He’s a man of high integrity, handsome, caring, but also longing for love and sex. String of Pearls is his love story. 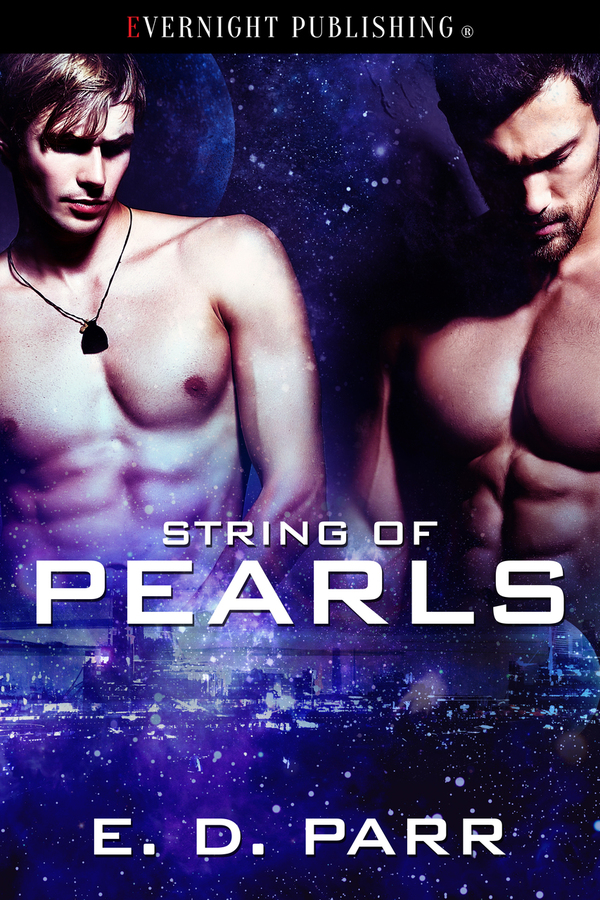 Handsome, elite space pilot, Tobias Mars is completing a special mission, when on a water planet, recently ravaged by space pirates, he discovers Dreft Hann hiding and injured in the sand dunes.

There’s instant attraction between the two men, but honorable Tobias believes the fact Dreft is in his care precludes him from showing his growing love for the young man. What’s worse is his shocking discovery of Dreft’s real identity. Even so, Tobias can’t deny his feelings for Dreft.

As beautiful Dreft falls in love with Tobias and dreams of joining the elite pilot squad, trouble is brewing from someone in Dreft’s past.

Will love finally win with so many obstacles in Tobias and Dreft’s path? 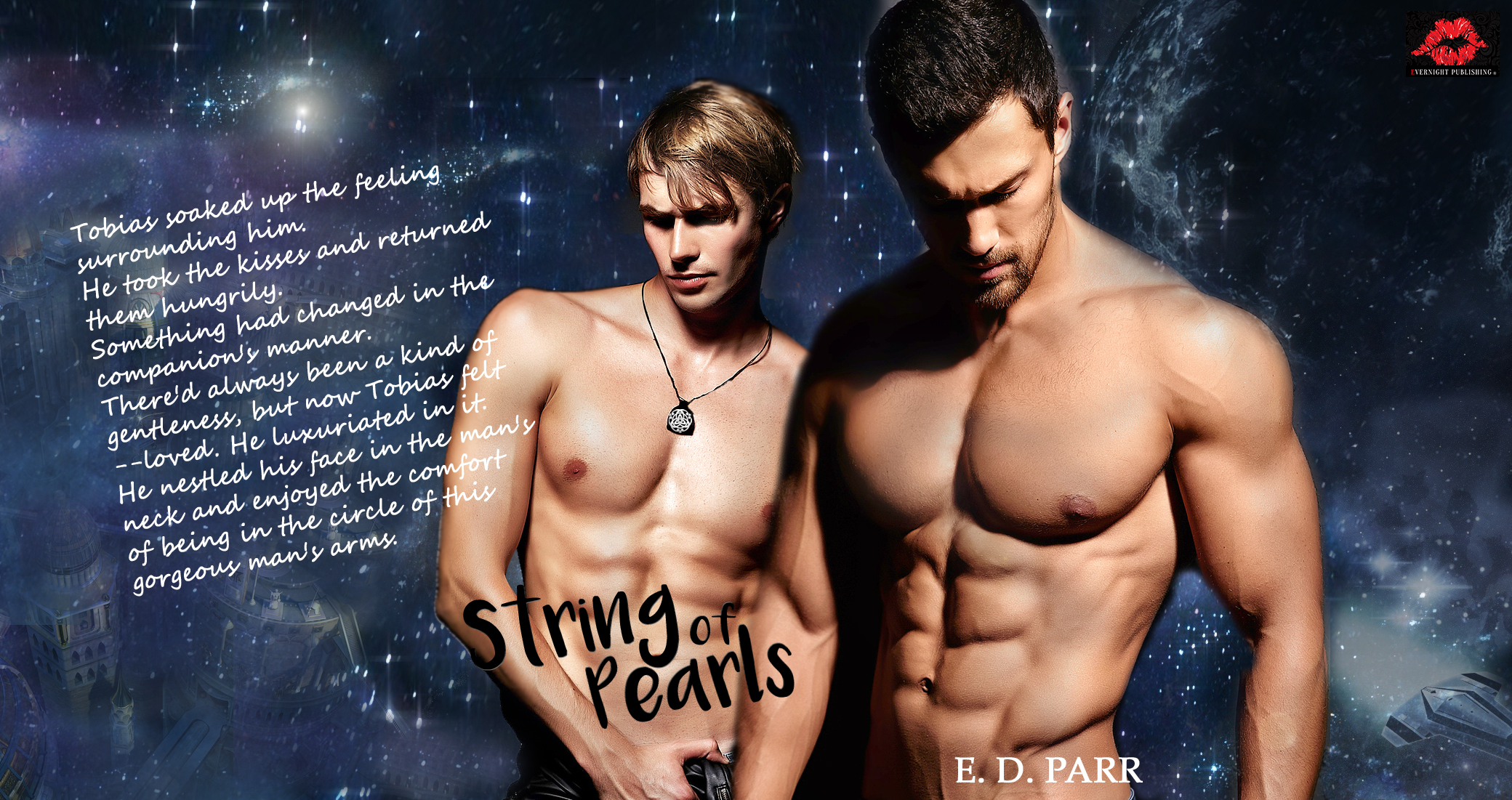 Tobias Mars gazed at Dreft lying on top of the bed in room ten of the infirmary. Hari’s treatment had worked wonders and not only on Dreft’s wounds. Hari had cleaned Dreft up. His hair, now a dirt-free glossy hazelnut brown was brushed back to show off the handsome planes of his face. Hari had replaced Dreft’s strange boy-like clothes with the infirmary’s grey cotton pants and t-shirt. The man was, as his colleague, Dante, put it, deliciously pretty. For a fleeting moment, Tobias wondered what it would be like to kiss those perfect lips and hold that muscular body to his own. He shook the thought away.

Dreft opened his eyes and a shy smile spread on his mouth. As Tobias neared him, he shuffled up the bed to sit. “Thank you so much for helping me, sir.”

Tobias pulled a chair beside the bed and sat. “My name’s Tobias, Tobias Mars—no need to call me sir. How are you feeling?”

The handsome man’s eyes held gratitude. “I’m so much better. Thank you. I noticed the insignia on your jacket, sir.”

Tobias grinned as his fingers went to trace the gold and blue embroidered crest. “I’m one of the queen’s pilot explorers. I guess you could call us the elite unit. All the same, call me Tobias. I’d like that.”

“I’ve heard that you have to be aristocracy to be chosen for the unit. Is that true?”

A little frown creased between Tobias’s eyes. “Have you? Where’d you hear that?” A spike of worry prevented him from answering with the truth. His intense security training from the warlock, Indigo Vaughn, threw a question into his mind. Could Dreft be a rival court’s spy or even assassin?

“Sorry. I mean no harm. I heard a lot of things during my years as a slave.” Dreft’s voice held anxiety. His blue eyes clouded.

Witnessing Dreft’s unease, a wave of kindness softened Tobias’s look and tone. “How long were you a slave?” He remembered Hari’s description of the scars on Dreft’s back.

Sadness passed in Dreft’s eyes. “Five years—I’ve been a slave since I was stolen from my home when I was eighteen. I, I’d become desperate, hence the leap from the ship when we cruised reasonably low to take water from the lake on the planet where you rescued me.” His voice cracked a little.

Tobias watched fear replace the sadness in the young man’s eyes. He wanted to lighten the mood. “Hey, are you hungry? I bet Hari hasn’t given you breakfast and I’ve not eaten yet. Do you feel up to a little walk? My home isn’t far. I have loads of food—fruit, pancakes, savory pastries, and coffee. What do you say?”

Dreft gave him the most endearing look. “I’m very hungry.”

Tobias stood and pushed the chair away from the bed. He held out his arm for Dreft to take and helped him stand. “Hang on. You have no shoes.” Tobias left Dreft perched on the side of the bed. He went to the closet inset at the end of the wall and brought back a pair of felt slip-ons for Dreft.

Dreft pushed his feet into them. “Thank you. I think the medicA threw away what I was wearing.”

“Hari is the best medicA available. I trust him implicitly, but he’s a hygiene fanatic. He probably burned what you were dressed in.” Tobias laughed. “Can you manage or will you take my arm. It’s a gesture of support.”

Dreft’s gaze raked Tobias’s face and he smiled softly. “I know the clothes you found me in probably gave you the impression I’m a pirate’s plaything. I’d like to explain—”

“You don’t need to—” Tobias hurried to assure Dreft.

“After you’ve eaten, then.” Tobias led the way from the room, along the corridor and out of the infirmary door. His villa was two doors down from Dante’s and he walked slowly favoring Dreft’s halting steps.

“I’m limping but Hari said my legs were only bruised under the abrasions. Sorry. I didn’t expect them to hurt so much. My ribs don’t and they were broken.”

“Hari fixed your ribs and administered slow release pain reliever at the site. He fixed your abrasions somewhat, but it’s good to heal naturally where possible. He wants you to rest.” A smile sprang to Tobias’s lips. “If he sees us, he’ll probably say to me, ‘Sir, you got Dreft Hann up too soon.’”