Happy Hump Day everyone! The blog has been quiet for a few days, and for that I apologize. I’m still here, however, and I have a fantastic new series to tell you about as we enjoy the first few days of summer. My fellow Evernight authors Elena Kincaid, Maia Dylan, and Sarah Marsh have collaborated on an exciting new series called Beyond the Veil. Book one, Chasing Faete, is available now! 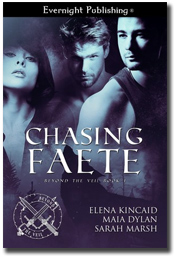 Erica’s been on the run from her parents’ murderer for years, but her luck at evading capture has finally run out.  She finds herself trapped by the man who tortured her for years, but she’s prepared to fight him rather than go back to the Fae King. She almost thinks she’s hallucinating when two wolf shifters appear out of nowhere to save her … but that could be the blood loss talking.

Leo and Ben were thrilled to stumble onto the scent of their mate as they were on a routine patrol. They follow their noses and barely find her in time, wounded and battling with a group of armed Fae. Life is about to get a whole lot more complicated when it comes to mating their little pixie.

Erica can’t deny the bond she feels with her wolves, but will the need to avenge her family and the fate of the Fae realm cost her the loves she’s waited so long to find?

“Why don’t I draw you a nice hot bath to help you relax?” Ben suggested to Erica as soon as Leo left to seek out Gabe. The Alpha was gracious enough to give up his room, a large master bedroom with a king-sized bed and an en-suite bathroom. Both the bathtub and the shower were large enough to fit at least three people comfortably. Perhaps Gabe prepared for his own hopeful future, he thought.

“Only if you join me,” Erica pleaded. There was no trace of seductive humor in her voice. “I don’t want to be alone right now.”

“Come here, love.” He beckoned, holding out his hand for her to take. When she reached him, he enfolded her in his arms and whispered in her ear, “You don’t have to be alone ever again. We’ve got you.”

When he released her, he gently led her by the hand into the bathroom. He sat on the edge of the tub and started the water. Once the temperature was to his liking, he stood up, firmly cupped Erica’s cheeks, and kissed her slowly, deeply. Then he let his hands trail gently down her sides until they reached the hem of her shirt. Only then did he break apart from their kiss, just long enough to lift her shirt over her head. He deftly removed her bra, unzipping her jeans as well as his own before he needed to release her lips once again. If he got to love her for a thousand lifetimes, he’d still never tire of the taste of her sweet berry-flavored lips.

Ben steadily held her gaze as he dropped to his knees in front of her to remove her shoes and socks and then finally her jeans and underwear. He could not resist inhaling the sweet and tangy scent of her arousal. He spread her pussy lips with his thumbs and flicked his tongue over her clit. One of Erica’s hands grabbed onto his shoulder for balance, while the other fisted in his hair. She panted heavily as he continued to tease her little bundle of nerves.

As much as he relished in the taste of her, this was not the time to tease. He needed her, to feel himself inside of her while shutting all the danger looming over them out.

He stood abruptly, lifted Erica to straddle his waist, and stepped into the tub. As soon as he sat down, she took him inside of her, both of them moaning loudly at the contact. His love was just as desperate for him as he was for her. Their lips and tongues collided once again as she rode him hard. The sounds of the faucet still running and water sloshing to their fast paced rhythm intermingled with their loud moans and heavy breathing.

Ben fit so easily with her. Fulfillment and aching all wrapped up in one neat little exhilarating package. He’d be damned if he would be denied a lifetime of this. Fuck that! His wolf echoed. Ours forever!

He grabbed her hips and pushed up hard and fast as Erica pushed down with equal fervor. They broke their kiss again to stare sat each other, but not for long. Erica’s eyes rolled back, forcing her to close them. He felt her walls tighten even further, squeezing, urging him to come with her. When she threw her head back, he buried his face in the crook of her neck and wrapped his arms tightly around her.

Ignoring the sound of the door quietly opening and closing—he knew his brother was now their audience—Ben let go in sync with Erica. His loud groan would surely have been heard throughout the house had it not been muffled by Erica’s neck. His sexy pixie, however, was not so quiet. The echo of her desperate cries must have resonated at least down the hallway. Perhaps everyone was still downstairs, but either way, he couldn’t bring himself to care after what the two of them just shared.

He held her tightly for a few moments more, knowing that she needed Leo, too. It was Ben’s turn now to relax and just admire the view.

Leo stepped into the bathroom and closed the door, not able to take his eyes from the beauty before him. His mate had her head thrown back, an expression of sheer rapture on her face as she found her pleasure, and the sounds of her passion were the sweetest music to his ears.

He stepped up to the bath and turned off the running water before there was even more of it on the floor. He understood very well how his brother hadn’t noticed the mess.

“Yes, brother, seems you were seduced by a mermaid. I can see how you’d lose track of the rest of the world.” Leo smiled down at Erica as he cupped her cheek with his hand and leaned in for a gentle kiss. “How are you feeling, love?”

“Better now that you’re here as well.” Erica kissed him back with a heat that had him growling low in the back of his throat.

“Stand up, little one,” Leo ordered as he took a step back and watched the water slip off of her perfect, creamy curves.

He held out his hand to her, and when she accepted it, he helped her step out of the tub and onto the warm tile.

“Oh, you’re in for it now, pixie. I’ve seen that look before.” Ben laughed as he sat back in the tub with a sigh.

Leo tried not to smile when their mate’s eyes opened a little wider in concern, but he wanted to keep her off balance for this. They’d both enjoy it more. 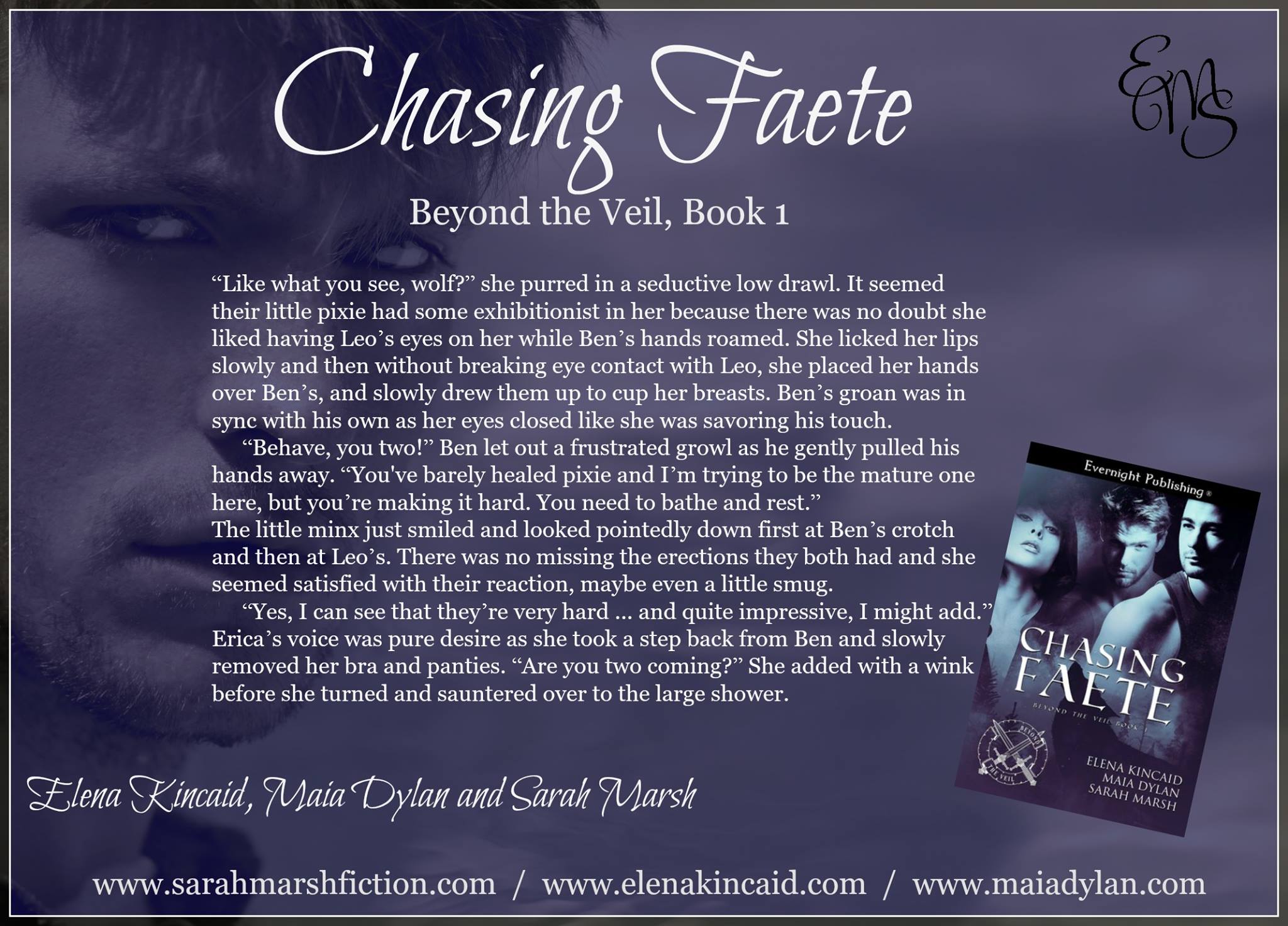 Sarah Marsh was born in British Columbia where she still lives. She has only recently began her writing career, finding it the perfect outlet for taking the edge off a nine to five office job. She’s been a science fiction and romance junkie for years and when her imagination started to take the characters she’d read about even further in their adventures, she decided to try writing something of her own.

Sarah’s also a former pastry chef and spends a lot of time cooking and baking for friends and family as well as painting and knitting. Her biggest weaknesses are animals of any kind … she even loves the ones that wake you up at four in the morning because they can almost see the bottom of their food dish.

When it comes to life in general, she’s a big believer that laughter is the best medicine and that there’s no such thing as too much love, which is why she’s such a sucker for a happy ending.

She was born in Ukraine and raised in New York, where she currently lives with her daughter. She graduated college with a BFA in creative writing and In addition to writing, she also started a graphic design business a few years after graduating. When not working, Elena loves to spend time with her family, travel the globe, curl up with a good book, and catch up on her soaps.

Come and Join Maia Dylan, Sarah Marsh and Elena Kincaid for some wild fun, crazy antics, and lots of eye candy.  They even have a theme song.