Happy Friday! I’ve got the lovely Amber Morgan here to tell you all about the second installment in her Wild Blood MC series, Wolf’s Hunt. Take it away, Amber!

Thanks for having me today! I’m so excited to be bringing you all the second book in my Wild Blood MC series – Wolf’s Hunt. This is one of my favourite books that I’ve written and I can’t wait for you all to join Wolf and Clea in their story. If you like a good dash of redemption and revenge in with your romance, you’ll love Wolf’s Hunt! 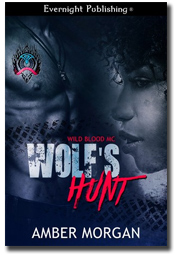 Three years ago Wolf fled New Orleans, leaving heartache and violence in his wake. Now he’s got one chance to win back the woman he left behind, Clea Allary. There’s just one thing standing in his way—the deadly President of the Voodoo Kin MC, a man who will stop at nothing to finish Wolf and claim Clea for himself. Whether she likes it or not.

Clea’s been staying one step ahead of the Voodoo Kin ever since Wolf broke her heart and disappeared. But it’s getting harder to cope and there’s no way out that she can see. When Wolf crashes back into her life, he offers her a dangerously tempting escape route. But how can she ever trust him again?

Grim bought them a couple of beers, but Wolf simply held onto his, not wanting to drink. The cold bottle felt good in his hands, pushing back some of the body heat generated by the other customers milling around. Even with the air conditioning on though, it was a sticky-hot night. Kinda night he used to love. He and Clea would run around New Orleans from dusk til dawn, drinking, laughing, then fall into his apartment as the sun came up. They’d fuck like they’d never get enough of each other, then he’d run out for coffee and beignets, and they’d eat and then fuck all over again.

“I wasn’t,” Wolf lied. He considered, then took one quick swig of beer. At the far end of the room, the stage lights brightened up, attracting everyone’s attention, then dropped low again to bathe the stage in a dreamy golden glow. Wolf felt his adrenaline spike, his body practically vibrating with it. It was the same feeling he got before every fight, a drumming in his blood that he always welcomed.

Cheers popped around the room as Clea swept through the velvet curtains at the back of the stage. That surge of adrenaline pumped harder, urging Wolf to rush down the room and grab her. He could only stare though. And she was well worth staring at.

Her gold dress looked painted on, clinging lovingly to every lush curve. The color did incredible things for her dark skin and bouncy curls, transforming her into a fiery, shimmering creature, too beautiful for mere men to even look at, let alone touch. The dress touched the floor at the back, but skimmed her knees at the front, showing off perfect legs that Wolf had wrapped around his neck too many times to count. She’d wrapped a chunky gold and red necklace around her throat, an Aztec-style statement piece that he recognized with a jolt. He’d given it to her for Christmas one year, the last Christmas before he fucked everything up. She loved that kind of shit, big and bold and sunny.

She’d kept it. She’d kept his gift. Wolf allowed himself the smallest flicker of hope.

He had seconds to drink in the sight of her, like a man dying of thirst falling into an oasis. Then she stepped up to the mic and tapped it lightly.

“Good evenin,’ ladies and gents,” she said, playing up her New Orleans drawl to another burst of cheers. “Y’all havin’ a good night so far? Who’s ready for a song?”

Music struck up and she started singing. Her voice was everything he remembered, soft with a touch of gravel, like honey brushed over sandpaper. Wolf gritted his teeth as his cock hardened. Her voice had always done that to him. It was probably dumb to hope time and distance would have changed that when it hadn’t changed anything he felt for her.

Against his better judgment, he took a deeper drink and started moving through the crowd. Grim followed, grabbing his shoulder. “You sure about this, Danny Boy?” he hissed in Wolf’s ear.

“Yeah,” Wolf said, shaking him off. He was lying again. He wasn’t sure it was a good idea, but he couldn’t fucking stay away. He had to get closer to the stage, had to get closer to Clea. Otherwise what was the point of coming at all? He sure as fuck wasn’t going to watch her belt out a few jazz tunes then slink away without even letting her know he was here.

Amber is the secret identity of a writer who normally pens urban fantasy, but feels like stretching her wings. Amber loves darker romance, anti-heroes, good red wine, and expensive chocolate (sometimes all at once). She’s based in the UK and lives in an adorable cottage with her dream man and an adorable cat.