Welcome to another Monday and another new week. Happily, it’s a short one here in Canada! Today I’ve got April Zyon’s latest, book 5 in her Space Wars saga: Chevon’s Mate. 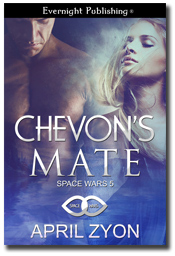 Dumping her fiance and going on their honeymoon alone was the best thing Laura Troxell had ever done. Too bad she had seen and heard too much and created enemies that wanted her dead.

Chevon von Janus simply wanted to mold the men and women that boarded his ship into the best Imarian officers they could possibly be. A general in his own right, Chevon was a trainer, but he was also a warrior. When his ship’s sensors picked up a strange object near an asteroid field, he felt it was his duty to investigate. What he found inside, however, threw the straightlaced general for a loop. The woman was from enemy territory. She was also his mate.

Now he has to figure out how to keep her safe from his people and hers.

Laura Troxell was a Craegin woman who had everything in place for a long and loving life. She was engaged to the man of her dreams, had a brother that adored her and a position she absolutely loved. Well, that was until her world fell apart and the truth about her brother and fiancé came to light. Dumping her ex had her taking a nice long trip on a pleasure cruise around the Craegin universe, including traveling close to the neutral zone with Imarian space. It was thrilling and fun all in one. It was a non-stop party until someone decided to dump her like the proverbial trash, thankfully they, at least, dumped her in a life pod instead of just shoving her out of an airlock.

Chevon von Janus was a man who held his duty to train the next soldiers very seriously. He was a man that was a stickler for the rules, even when it came to an unknown life pod coming toward them from the neutral zone. Everything went by the letter in saving whoever was in the pod, he just never expected for the person to be a woman, a Craegin woman at that, but more than anything he hadn’t expected her to be his soul bonded mate. Talk about a surprise to the by the books commander.

The combustion between the two was felt immediately. However Laura had another secret to tell him, one that she was certain the Craegin’s wouldn’t want the Imarian’s to know about and when she did it certainly did heat up the war that was already sizzling between their peoples.

Chevon first has to keep Laura safe from his crew and then he has to work with old friends to figure out how to keep all of them safe. Life was going to get very interesting for these two very quickly. But no one ever said that love was easy, at least not when you were from two different cultures, cultures that happened to be at war.

Good thing that they had such amazing friends ready to go to the mat for them or their love would never know the light of day.

April is a lover of all things romance, and a writer with an imagination that goes on for miles and miles. Writing for Evernight Publishing is a dream come true for her and something she wants to continue for the rest of her life.

I work third shift and work odd hours and days so generally when I am awake no one else is, so I write 🙂

That’s about it for me!