The last long weekend of summer has come and gone and it’s back-to-school time (which I happen to love because school supply sales)! Today I have the charming Ravenna Tate visiting to tell us about her sizzling new series, Blood Moon Lynx. The first book in the series, The Alpha’s Taboo Mate, is now available and I’m going to let Ravenna tell you all about it!

Writing shifters was something I was asked to do by so many readers, I felt I had to try it. Did I hit a home run? Only time will tell.

THE ALPHA’S TABOO MATE is book one in my new Blood Moon Lynx series. Here is the link to the series page on my website.

One thousand years ago, in an unholy alliance, a male lynx shape shifter and a female vampire became lovers. Both knew their mating was forbidden, but their desire for each other was too great to ignore. Under a blood moon, they mated. The lynx bit the vampire woman, marking her as his mate. The vampire in turn bit the male lynx shifter, marking him as hers forever.

But then the lynx took a human female as a lover, betraying the vampire and pack law. When the vampire discovered his infidelity, she struck out against the two, but in the end couldn’t kill her lover. The human female and the lynx turned on the vampire. While she slept in her coffin during the day, they drove a stake through her heart. Unbeknownst to them, in doing so they turned the vampire’s mark of possession on the lynx into a powerful curse that affected his descendants for all eternity.

Despite centuries of mating with other female cat shifters, the male lynx shifters still have vampire blood in their DNA. Because of this, they possess powers that include being able to see minute details at great distances, and being able to travel with tremendous speed while in partial or full shifted form. Their powers are strongest during a blood moon. When they mate with a human, however, the offspring possess enhanced negative traits such as greed and contempt for the pack and its laws.

As the legend of the unholy alliance grew into a myth, fewer cats believed in it, thus exposing all the packs to dangers that still lurk today… 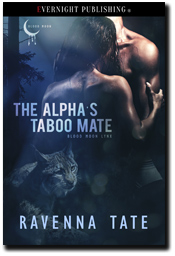 Alpha lynx shifter Canyon Benedict has always known Fiera Kent was his mate. When leopard shifter Hawke Medina tries to claim her, in order to use her as leverage to gain control of the Kent fortune, Canyon takes matters into his own hands. But even after he and Fiera are officially mated, the threat from the Medina family is far from over.

Fiera has loved Canyon from the time she was a child, and is thrilled when he sneaks her away to his family’s secret cabin across the river so they can be mated. But Hawke won’t let it go. Canyon and his father eventually discover illegal business practices that uncover the Medina family’s web of deceit and lies affecting their entire village.

But is it enough? Will Canyon have to fight Hawke to determine which alpha can finally claim Fiera for life? [Read an Excerpt]

A powerful orgasm overtook her. In response, Fiera arched her back and cried out. Surely his dick inside her couldn’t feel better than this. If it did, she’d pass out from sheer joy. He continued sucking her clit and finger fucking her until the contractions began to subside. Once they did, he lay on top of her again and kissed her.

Fiera wrapped her arms and legs around his hot, hard body and shoved her tongue into his mouth. She tasted her own juices, but she didn’t care. This was so damn wonderful she might never leave this cabin. They could stay here, making love until they couldn’t walk, and she’d be just fine with that.

“Oh, Fiera…” Canyon sat back on his heels and stroked his dick again, then moved closer to her and guided it toward the opening to her wetness. “Are you ready?” His voice was so rough and gravelly, but that only added to the excitement.

“Yes!” She’d been ready for this most of her life. “Take me, Canyon. Make me yours.”

With a loud groan, he began to ease his cock into her pussy. Fiera held her breath and bit her lip because it hurt. “It’s all right, sweetheart. Try to relax your muscles.”

“Okay.” She smiled up at him, touched that he’d noticed her discomfort.

Canyon bent down and kissed her again, gently working his lips over hers until Fiera was so focused on the kiss and the heady sensation it sent coursing through her body, she didn’t realize his cock was finally inside her. There was no pain now, only a fullness that sent shockwaves of desire out to her fingers and toes.

“Oh, yes. That’s it.” When Canyon began to move, Fiera threw back her head and moaned loudly as the most exquisite pleasure flooded her senses. “You’re mine now, Fiera. No one can take you from me. We’re bonded forever!”