Everyone loves a cowboy (really, though, what’s not to love?) and author Paige Warren is no exception. Be sure to check out her sultry new release from Evernight Publishing, Texas Twang! 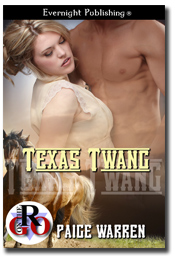 Lexie Duval has always gone after what she wants, and she wants Drew Benson. The tall, sexy, mocha cowboy is one hunk of man she’d love to get her hands on. A rodeo cowboy through and through, she just hopes he can stay on for longer than eight seconds.

But when their time together uncovers some surprising secrets, Lexie isn’t sure what to think or how to feel. Will Drew still want her when he finds out? Or will he push her away and move on?

Lexie fluffed her curly blonde hair, checked to make sure the girls were still behaving and hadn’t completely spilled out of her top – however, a little peek never hurt – then she sauntered over to one yummy Drew Benson. It was only neighborly to introduce herself, after all. She sidled up to him, brushing against his body to gain his attention. When he was focused on her, she gave him her slowest, sexiest smile, the one that had gotten her into more trouble than she’d like to remember, and laid her hand on his arm.

“Hey there, cowboy. You’re looking mighty lonely standing over here by yourself.”

His gaze traced her curves, of which there were plenty, and his eyes lit in appreciation.

“I suppose you’re offering to keep me company?” he asked, his Texas drawl sending shivers down her spine. Lord, but she loved a man with an accent.

“Word around town is that you’re old man Benson’s grandson. Thing is, you don’t sound like an Okie.”

His lips tipped up on one corner, as his eyes crinkled in merriment. “And what do I sound like?”

She bit her lip, looking up at him from under her lashes. A move she’d practiced for hours in front of the mirror as a teen. 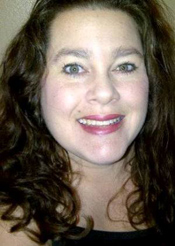 Paige Warren spends her days weaving tales about alpha male cowboys and the women who love them. There’s nothing hotter than a man in tight Wranglers and a pair of well-worn boots. You have to admit, there’s something sexy about a man who knows how to use a rope!

A cat lover, she has more than one furbaby running around, keeping her company in the wee hours of the morning as she tries to find just the right way to say “His skin gleamed, the early morning rays caressing his sun bronzed flesh, as he studied her from beneath the brim of his Stetson.” Or, you know, something similar.

When Paige isn’t dolling out tons of affection on the furbabies, or slurping down a pot of coffee (Yes! A whole pot!) so she can get in her daily word count, she enjoys reading and watching movies – romances, usually. 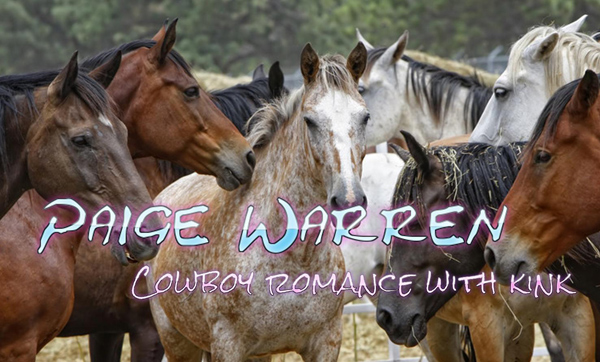 2 thoughts on “A ‘Hot, Mouthwatering, Texas Cowboy’ from Paige Warren!”