Hi and thanks for having me to visit. I’m thrilled to be here.

I’m excited to be celebrating the release of my second full length PNR novel.

Scar Tissue is the second book in my Dominion Series and has been long in the making. I’m very proud to be presenting it.

A single black and white photo was the inspiration that finally broke through my writers block and got me restarted. I’d written several beginnings to Scar Tissue, none of which were working. The photo in question(which I’ve sadly lost) was of a woman holding a man against a rough brick wall. It got me thinking. Why does she need to be in control? Why does he voluntarily submit to her? And so the basis of my characters relationship was formed.

Read on and you’ll find the answers to these questions. 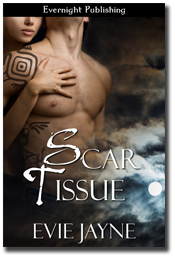 Caden James is a rare subspecies of vampire. That’s bad enough, but it’s only going to get worse. The 2nd maturation is almost upon him, when he will fall into the Dark Dominion. Unless he can find the female fated to save his soul.

Sounds simple, find her and stop his descent into horror.

Except with Parry O’Morrigan, nothing is simple.

Parry’s past has scarred her physically and psychologically, leaving her with a bone deep fear of vampires. Until she crosses the path of a fanged warrior who sets her blood on fire.

Thrown together, the pair track the creator of a new breed of zombie. As the hunt heats up, so does the passion between them. Can Parry overcome her past, or will she let the Dark take him?

Even if she can, Cade’s fate may yet destroy the only female he’s ever cared about.

Lust and aggression shifted under his skin. He needed to get her under him, to mark her and make her his. Her near death at the hands of the revenant had stripped away much of the control. Bloodlust roiled through him.

He fought to keep from baring his throbbing fangs at her. He had to be sane about this. His nature could not be the leader in this confrontation.

“You’re hurt,” he said and forced himself to take a step back from her, and then another. All he wanted was to close the gap between them. Her chin jerked in acknowledgment, but she lifted one black brow in a blasé arch.

He shifted forward, unable to stop himself, the pull towards her magnetic. Her blade rose, pointed straight at his throat. He was fully aware that with a flick of that fine boned wrist could part his head from his neck. The thought made him smile. Wild sidhe, dangerous female.

Memories of her body pushed hard against his in that alley three weeks ago flickered in his mind. The feeling of her small muscular back against his chest, her ass pressed into the ache between his thighs. He growled low in his chest.

With infinite care he lowered his own sword. When the bloodstained tip scraped on the ground he released the handle. It clattered on the gravel with a metallic ring. Sometimes actions were better than words.

“What else?” she said. He shuffled his left foot forward and let her see the hilt of the dagger in his boot sheath.

He bent slowly, feeling her gaze follow his movement. After tossing the blade at her feet he stood up.

“What else?” she repeated.

He had to smile, even though he knew it exposed his fangs to her. Not like she wasn’t fully aware of what he was anyway. Of course she knew he wouldn’t be lightly armed. Hell, her sisters had taught the Abstainer soldiers.

He pulled his coat back from his shoulders, exposing the harnesses that were strapped to his chest, hips and thigh. He unsheathed blade after blade and tossed them at her feet like a deadly offering. Apt, his bloodstained hands were all he had to give her. No gentleness, no reverence or refinement. Those things weren’t in him.

He was a curse, murder on two legs, death with a vampiric heartbeat. He didn’t deserve her, but he would have her anyway. He needed her to save what little was left of his soul.

As he laid the last blade at her feet she nodded, but one of her twin swords stayed pointed in his direction. Cade fought the urge to knock it away and cross the ground between them. Not the right time for that. He’d fucked it up the first time he’d met her, manhandling her body as if he had the right. Then losing it on the revenant tonight. Could he have done anything to make it any clearer what he was?

“I remember you, Abstainer,” she said.

His lips curled. Good, that was good.