Take a healthy shot of speculative fiction, some intriguing historical figures, throw in a murder – and shake. I promise, you won’t come up with anything nearly as exciting as what my guest for you has today. The delightful and talented Melanie Fletcher is here to talk about her scintillating new historical mystery, A Most Malicious Murder.

Take it away, Mel!

Hello, and thanks so much for having me on today! A Most Malicious Murder is my first speculative fiction novel, and it’s a direct result of seeing Jeffrey Combs in his one-man play Nevermore five times in 2009. I am nothing if not a devoted theater fan.

Malicious is an alternate history mystery set in an imaginary 1851 where Edgar Allan Poe did not die in 1849 under mysterious circumstances and went on to marry his childhood sweetheart. But when Poe goes on a lecture tour of England to promote his new magazine, he winds up implicated in a murder while in Oxford. Driven to use the skills of his detective character C. Auguste Dupin to clear his own name, Poe must also recruit a shy young Christ Church undergraduate to help him translate the Ancient Greek note left on the body by the murderer.

That undergraduate? Charles Dodgson, otherwise known as Lewis Carroll. I love it when my brain comes up with these connections. This most unlikely Holmes and Watson must now hunt down the killer before he strikes again, and hijinks most definitely ensue. 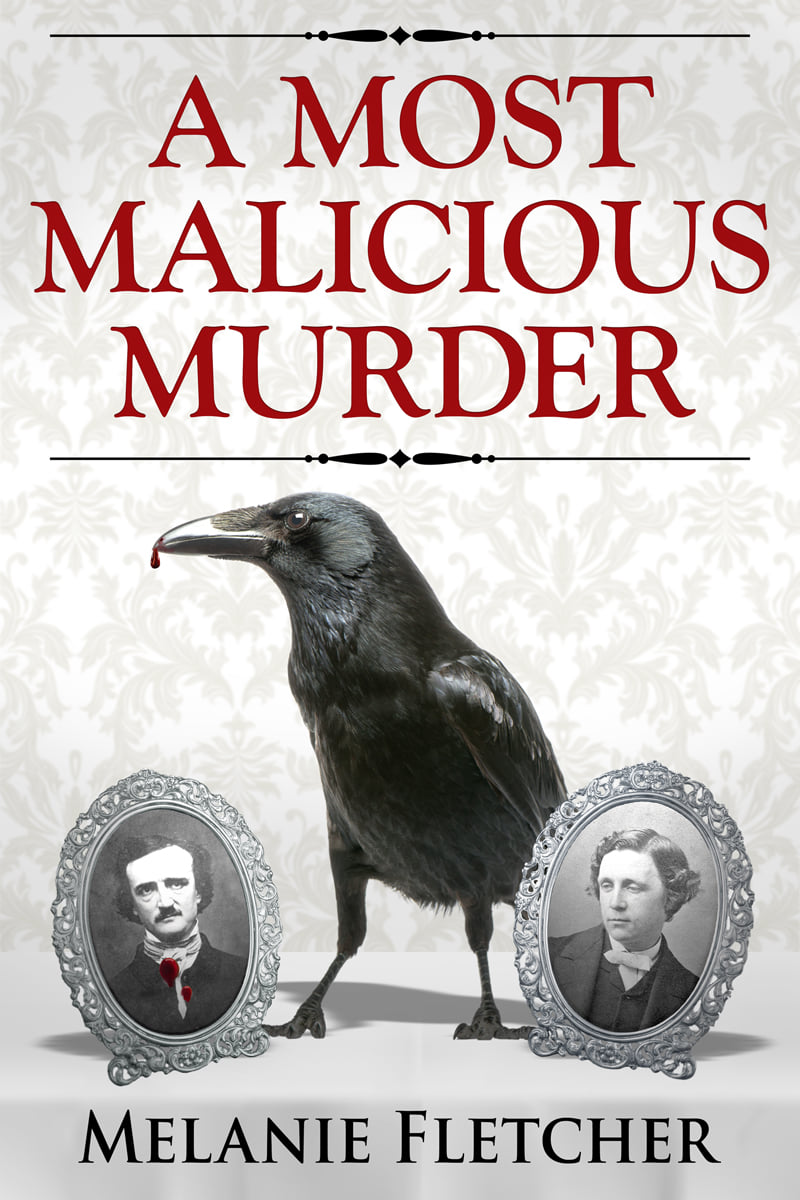 In an alternate 1851, the famous poet Edgar Allan Poe is remarried to his childhood sweetheart, prosperous, and touring England with his successful lecture series. But Poe’s notorious bad luck returns during a stop in Oxford, leaving him implicated in the gory murder of a chambermaid.

Alone and desperate, Poe must recruit a shy young undergraduate named Charles Dodgson (soon to be known as Lewis Carroll) to help him clear his name. Can this most unlikely pair of detectives track down the killer before Poe hangs for a crime he didn’t commit? 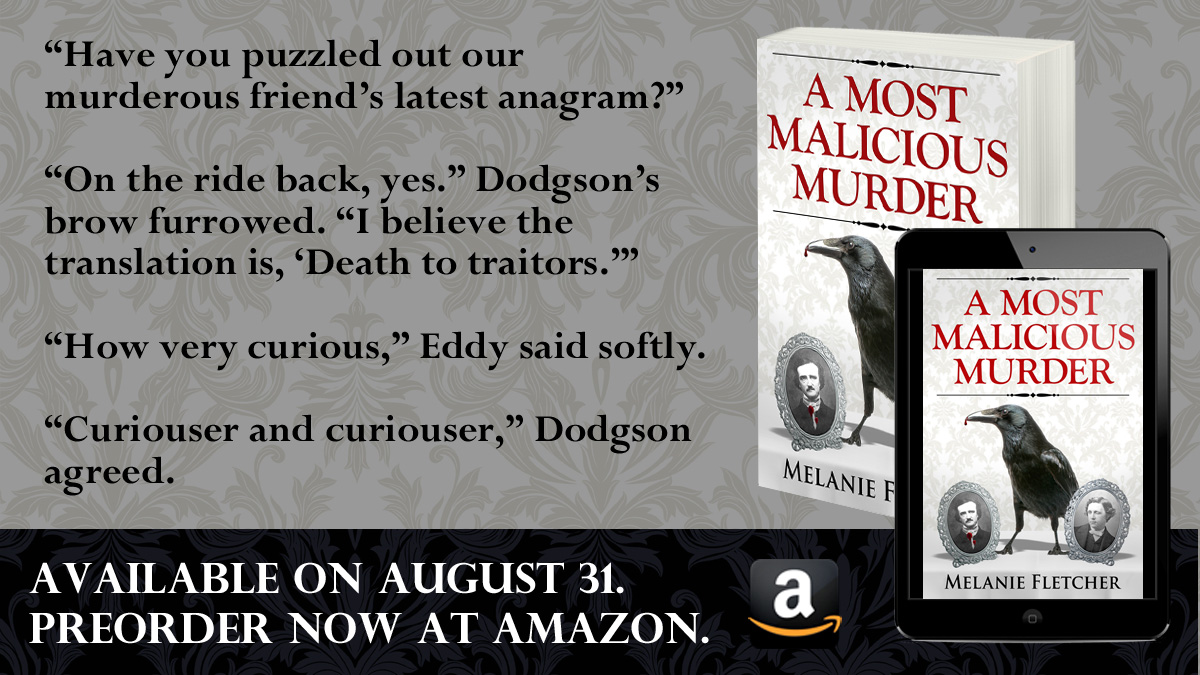 “My grandfather was General David Poe, a hero of the Revolution, sir!” Eddy roared, trying to focus on an astounded undergraduate. A fragment of memory drifted through his mind—the friend of that stuttering lad. Who, as a matter of fact, was sitting in the corner now, watching their debate with what appeared to be mute fascination. “My family is one of the most distinguished in Virginia, and I, I, sir, took highest honors at the University of Virginia!”

“Mr. Poe—” He felt Tomlinson putting a restraining hand on his arm.

He shook it off grandly. “I will not be talked down to by this, this pup, this craven child.” He waved his empty glass at the undergraduate. “How dare you, sir!”

“I didn’t mean to slight your family, sir,” the young man said. “In fact, I’m not quite sure how I did so. I merely meant to say that we do have something of a head start on our American cousins when it comes to the art of poetry. After all, the language in which you craft your rhymes did originate on these shores.”

That did make sense, dammit. “A seed’s point of origin has little to do with its flowering, sir!” Eddy declared.

“Well, I rather think it does,” the young man said. “After all, you wouldn’t expect an orange tree to blossom near Glasgow—”

“Mr. Poe.” That was Tomlinson again, now tugging on his arm. “I think you’re overtired, sir. Perhaps we should be leaving?”

Eddy whirled on the man, staggering as he fought for balance. “And abandon the field in the heat of battle?” he demanded. “Et tu, Brute? Is this the kind of amanuensis Ponsonby sends to assist his authors?”

“I’m afraid it is, sir,” Tomlinson muttered, seeing the bartender approach. “And speaking of assistance, perhaps we should be making our way back to the Mitre now?”

The bartender, a tall, stocky man with a beetling brow and shoulders that indicated he could carry kegs of ale unassisted, stopped in front of them. “Is there a problem here, gents?” he rumbled.

Eddy drew himself up, vaguely aware that he was staring the bartender directly in the chest. “I would say so, sir. Your clientele is badly in need of instruction when it comes to the art of the written word.”

The bartender nodded thoughtfully. “Issat a fact? Well, any sort of instruction that involves shouting at my customers had best be taken outside.”

A flicker of self-preservation broke through the fury, reinforced by blurry memories of being tossed out of assorted drinking establishments. Landing in refuse piles hurt, after all. “Indeed? Well, that suits me quite well, sir. I didn’t wish to spend any more time at this establishment, anyway.” He reached out and grabbed a nearly full bottle of wine from his table. “Tomlinson, pay the man and we’ll be off.”

“Pay the man?” Tomlinson squeaked. But Eddy was already walking out the door, swigging from the bottle as he went.

The rest of the evening passed in brief flashes. A cluster of more infernal young men passing him and snickering, damn their eyes. Pausing before the imposing edifice of Lincoln College and improvising a quatrain to the Muse of History. The welcoming glow of the Mitre, Tomlinson’s final mutters of farewell, and the seemingly endless stairs to his room.

As he fumbled for his key, he rested a hand on the door and almost fell forward when it opened unexpectedly. He giggled at his own foolishness for leaving the door open, but at least it meant he didn’t have to wrestle with the door lock. Staggering into the dark room, he shucked off his coat and tumbled headlong onto the bed. Some sleep, some dreamless hours of rest, and he’d get up and get back to work on the poem inspired by that lovely girl, what was her name? Jenny, Joan, something like that.

An unpleasant, meaty odor came to his nose, reminding him of Sissy’s coughing fits. Damn it all, why must she cough like that? No, poor angel, she’s ill. Must get up, make sure she’s warm and have Muddy brew the medicine for her—

Snuffling into his pillow, he surrendered to the welcome blackness.

The weak dawn sunlight that filtered through the net curtains felt like hot coals on Eddy’s face. The thumping pain that bounced from temple to temple seemed to reverberate throughout his entire body. He cracked one bloodshot eye open and groaned, sure that at some point in the night someone had switched his head with a giant rotting pumpkin.

He rolled over, whimpering when the thumping increased at his movement. Glaring at the innocent beams of sunlight streaming through the hotel room window, he took stock of his physical symptoms.

A foul taste in his mouth and a distinct layer of fur on his tongue. His stomach complaining vigorously and threatening to regurgitate its contents. His head doing its best impression of an overripe fruit about to pop. The stink of rank sweat coating his skin, and the distinctive odor of alcohol spilled on his shirt. Most importantly, the old familiar general sense of dissipation and illness, topped with a generous helping of shame.

He closed his eyes against the sunlight, overcome with self-loathing. Damn Tomlinson and his ‘drop’ of alcohol.

With a whine that sounded pathetic even to himself, he managed to sit up, forcing himself to breathe slowly and deliberately until the room stopped spinning and the surge of nausea eased. Standing took an act of will, but after a moment he was upright, peering at the unfamiliar hotel room.

His valise, trunk and writing implements were missing. He felt his eyes bug in dismay, the nausea threatening to rise again. His lectures, his works in progress, his stipend, God help him, all gone, no no no—

He opened his mouth to bellow for help, but all that came out was a thin, weak hiss. He sucked in a breath to try again.

Some last scrap of common sense came forward and pointed out a salient point. In addition to his missing belongings, the room’s window was against the right wall instead of the left. Moreover, the table had not been pulled up underneath it.

Every muscle in his body unclenched. This isn’t my hotel room. Even the wallpaper was different, now that he could focus on it, In his drunken stupor, he’d somehow staggered into another room last night and collapsed into bed before blacking out.

With a thrill of relief, he bent over and wheezed. After a moment, the wheeze turned into a chuckle, and then a full-throated gurgle of laughter. Oh, Eddy, you idiot. You lucky, lucky idiot. What would have happened if you’d collapsed on top of a traveling salesman or some sleeping burgher and his wife?

Wiping the tears from his eyes, he straightened up and shuffled forward, the pain in his head more bearable now. First to find his coat, then sneak into his own room and have a wash, and then a good breakfast—

His stomach roiled again. No, perhaps not. Coffee, then, as strong as the kitchen could make it, and then off to the train station and the next stop on the tour, and he would never ever mention last night to Elmira, it would be as if it had never happened—

His foot struck something soft.

He glanced down and gagged. The pretty young chambermaid from yesterday lay at his feet in a pool of blood, dead eyes staring in mute supplication.

Melanie Fletcher is an expatriate Chicagoan who currently lives in North Dallas with her husband the Bodacious Brit™ and their five fabulous furbags JJ, Jessica, Jeremy, Jemma, and Jasmine, known collectively as the J Crew.

When not herding five cats and an engineer, she turns into SF Writer Girl and has the SFWA membership card to prove it. She has been writing professionally since 1995 and her short fiction can be found in a variety of anthologies and online zines. She is currently editing her first full-length novel, an alternate history mystery.