It’s the last day of Spring, and I’m back with a new title to tell you all about. Hypnotizing Beat, book #2 in Katherine McIntyre’s Discord’s Desire series is available now from Evernight Publishing. Not only is it an Editor’s Pick, it’s a spicy, paranormal treat you won’t want to miss! 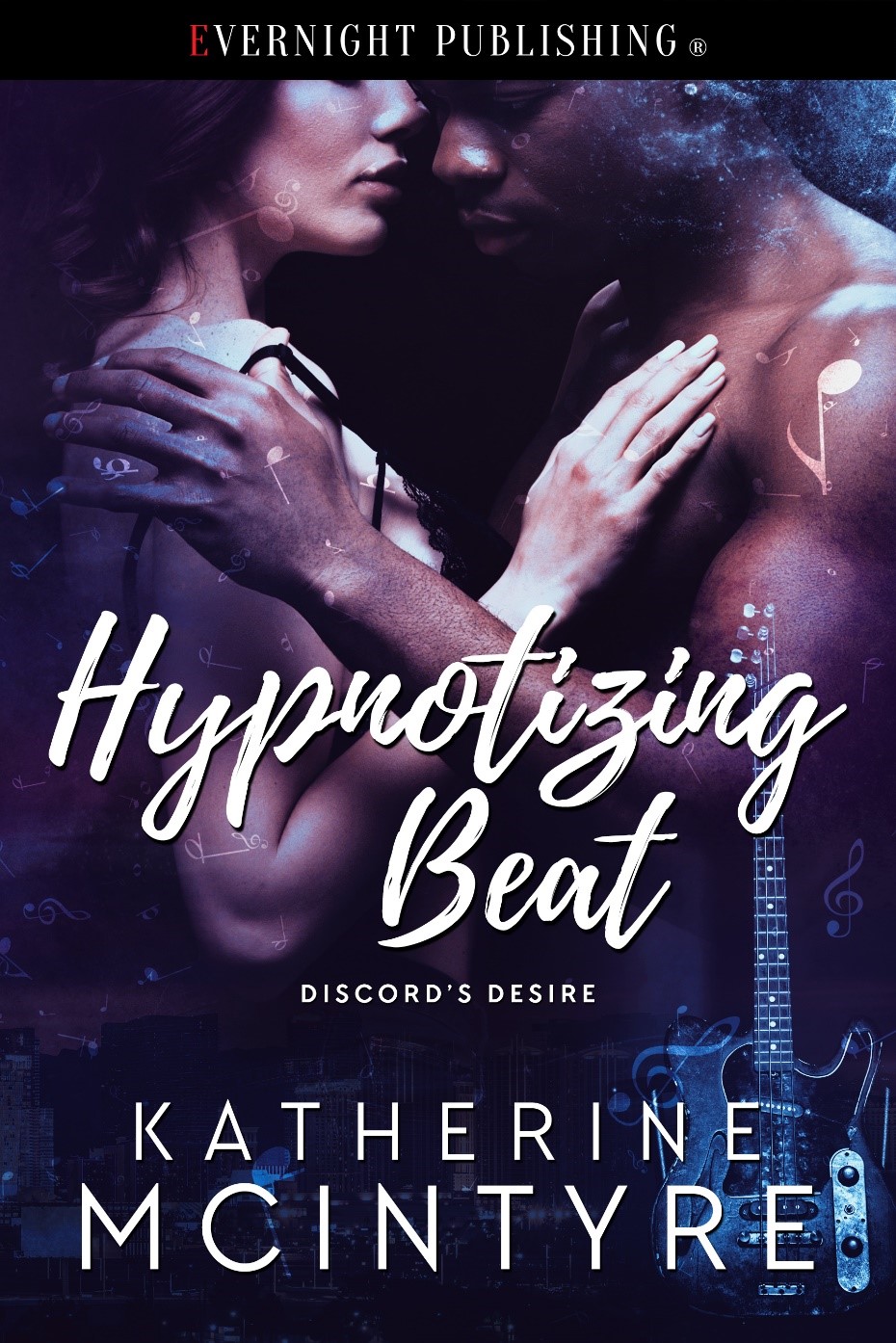 Danica Maslanka is a survivalist at heart, and after the way she screwed over the guys of Discord’s Desire in their time of need, Trevor Arceneaux wants nothing to do with her. Except when their tour brings them to Sin City and they run into Danica once more, he can’t get the leannan sidhe off his mind.

She’s in dire straits, hunted by the same man who enslaved Trevor for most of his life. He doesn’t trust her for a heartbeat, but he also can’t turn away someone in such a similar circumstance as his own. As their path leads them closer to a confrontation against his former owner, Trevor’s loathing for Danica strips away until he finds himself falling for the tough, independent woman. Danica betrayed them once, but as something real blossoms between them, if she backstabs them this time, his trust will be shattered for good.

The moment he turned the corner, Trevor froze.

She sat at the bar wielding an appletini like a weapon, and the trim black dress she wore clung to her lithe form like it’d been painted on. The neon blue scarf around her neck and matching heels fit her style to a T, accenting glossy chestnut locks pulled into a chignon and sharp, inquisitive eyes that sliced like a knife. The leannan sidhe’s pointed ears and elfin features were the only tip offs of her fae heritage, since she could blend even without the glamour veil that kept humans unaware of their kind.

The sight of Danica Maslanka delivered a one-two punch to the stomach, the reminder of the smoking ruin way things left off between them.

Trevor lifted the gin and tonic as he approached. “So, let me guess, poisoned?”

Her plum lips quirked in a pert grin. When they’d first met, he’d found her stunning, but nothing painted someone in shades of ugly like betrayal. “Like I’d be so classless to offer a poisoned drink. I was looking for a way to chat one-on-one, and I figured if I sent an email, you’d ignore it.”

“You’d be right.” Trevor took a seat beside her. He did trust that she hadn’t poisoned the drink—the woman wasn’t a killer, she just possessed no ounce of moral fortitude. Like he should’ve expected more from one of his kind. When Ky’s brother Larsen Blackmore targeted the band, sending mercenaries after them six months ago, Danica had showed up with a similar vendetta and they’d joined forces.

Until Ky got kidnapped and Danica ditched. She had Larsen in her sights and nailing him to a cross meant more than saving their lead singer. The last time they heard from her, she hung up on Liz while Ky was the worst sort of screwed. Trevor’s blood heated all over again, and he took a sip of the gin and tonic to cool his nerves.

He met her eyes, not betraying an ounce of the bitterness. “What’s so important you needed to stalk me all the way to Vegas. Not a close drive from San Fran.”

Danica glanced away, her gaze flickering to the columns behind the bar. “San Francisco and I are on the outs. Besides, my staff has always been urging me to take a vacation, so I figured now would be a fantastic time.”

“Wouldn’t Los Angeles be better real estate for your talents?” Trevor asked. If she wanted to play around, he’d indulge. After all, whatever reason brought her to him couldn’t have been a good one. “There’s more glitz than talent around here.” A leannan sidhe like her fed from artists in the same way Ky and Renn siphoned energy from sex and passion. He just leeched off of the crowds’ energy, so playing shows offered the perfect medium.

“And miss out on the chance to grab a drink with legendary guitarist Trevor Arceneaux? Never.” She placed a hand to her chest in mock surprise, the sarcasm fluid as a stream mid-storm. He had to give her credit for thoroughness—he kept his last name off the internet, so she must’ve gone an alternate route to obtain the information.

Trevor took a sip from his drink, the coolness gliding down his throat like relief. Not like he’d reached some state of calm. If anything, Danica’s presence hotwired his emergency alarms to constant alert. The woman didn’t act without motivation and ultimately placed her agenda above all else.

“How’s your sister doing?” he asked. Two could tango along the knife’s edge.

Danica’s gaze sharpened, if possible. The heartless woman had her weaknesses, no matter how she tried to downplay or hide them. After all—she had never been the one with a personal vendetta against Larsen. Everything she’d done was for the sake of her sister.

“She’d be better if she could get a seat at one of your shows,” Danica responded, trilling sweet as a sparrow. “A little birdie told me your show at the Joint tomorrow night is already sold out. When did you boys go from garage band blues to Rolling Stones?”

Avoidance of the highest order—that had been Danica’s game from the moment they met her. Too bad for her he’d played the game for as long as he could remember. Whatever roundabouts she took, he’d follow, until he managed to suss out her motivations for tracking him here.

“The bar’s set for sleazy in Vegas, and that’s the reputation we’ve cultivated for ourselves.” Trevor took another sip from his drink, the icy gin trickling down his throat. Not like the liquor did anything to sate the thread of exhaustion pulling tighter in him each passing day, ready to snap at any moment.

Danica’s eyes narrowed. She stared past him, and the back of his neck prickled.

“We’re being watched,” she murmured, her lips barely moving. She placed her appletini on the bar.

Cross a satyr, a siren, and an incubus with rock and roll, and you get Discord’s Desire, a band of panty-dropping hellions whose live shows incite orgies. Of course, their booking manager, Liz O’Brien, gets saddled with the monumental task of keeping the boys in line. She’s not your average chick, resistant to glamour of the fae and fame variety, which only makes her more tempting to their lead singer, Kieran Blackmore. With his incubus charms, silken voice, and GQ looks, he could have any girl he wants—except Liz. She doesn’t do serious flings, and she’s determined to keep things professional.

However, when Kieran’s brother sends hitmen after the band, Liz discovers others with her abilities—hunters, who just declared themselves enemies of the fae. Liz leans on Kieran for support, who proves his dedication at every step. Fae mercenaries might attack post-show, but Liz has her Beretta to handle that. What terrifies her more than any monster chasing after them is how she’s falling for Kieran. Her deep feelings trigger every ‘run-away’ sensor in her foster kid handbook, and worse, with war brewing between the hunters and the fae, their love can only end in heartbreak.