Are you ready for book #2 in Ravenna Tate’s Demons On Wheels MC series? Gorgon’s Vengeance is available now from Evernight Publishing – check it out! 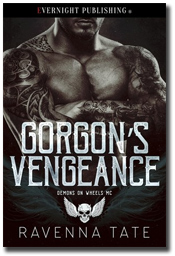 Chloe Dolan’s life is perfect. She’s the MC President’s old lady, she loves to dance at Scotty’s Place—the strip club the MC owns and operates, and she and Gorgon are deeply in love. But Chloe’s perfect life falls apart one night after her last set when she spots her abusive ex-boyfriend, Brad, in the crowd. He’s been gone a year, but now it appears he’s back to stay.

As Gorgon and the MC Brothers deal with the fallout from a turf war, they have their hands full from the Outlaw Dogs MC. In the meantime, Brad is stalking Chloe. He’s sending notes to the club, and every time Chloe goes into town, she spots him. Eventually, Chloe is reduced to hiding inside the club.

When the power goes out during a tornado warning, Brad breaks into the club. Can Gorgon save the only woman he’s ever loved? 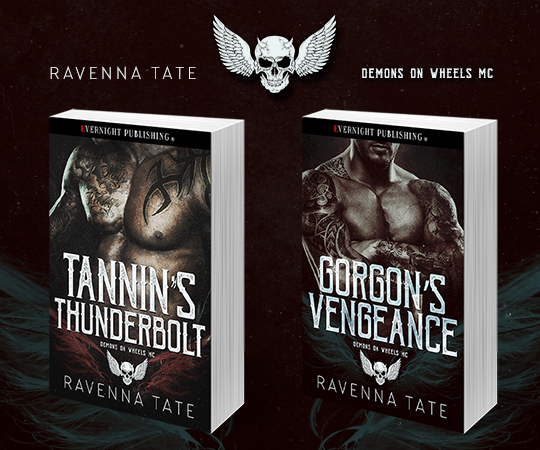 Chloe never ceased to be amazed that she could become so aroused, so quickly, whenever Gorgon was near her. All he had to do was look into her eyes, or call her “Chloe” instead of her stage name.

His dark eyes bored into hers, filled with lust and love. Chloe licked her lips and brushed one hand down his back, over his ass, and around the front of his jeans to massage his bulge through the fabric. “I don’t want to think about scary things anymore tonight.”

Gorgon grunted, cupped her face, and bent his head for a rough kiss. He shoved his tongue into her mouth, chasing away the demons in her mind. Gone were the horrible memories of what Brad had put her through, and the shock of seeing him tonight. Instead, Chloe let go and welcomed the heady sensation of being taken by the man she loved.

He moved his mouth to her neck, planting tiny bites there. “Get your clothes off, baby. I need to fuck you now.”

Chloe peeled off her tank top and shorts, tossing them across the room. He grasped her breasts and squeezed them together in his strong hands. “God, you’re so fucking beautiful.”

It had taken her weeks after arriving here to stop trembling in his presence. His dark hair, so soft to the touch, hung down to his shoulders when he didn’t have it tied back. The hairstyle gave him an unruly, lawless appearance that had both excited and frightened her at first.

“I’m gonna explode, baby. On your knees. Take out my dick.”

Her pussy was soaking wet. She loved it when Gorgon spoke to her this way, because she knew how much he loved her. It wasn’t rude or abusive in her mind. This was just his way. He’d lie down in front of a train for her. When he commanded her like this, it turned her on something fierce because there was love and devotion behind it, not fear or oppression.

Chloe dropped to her knees and rubbed her chin over his bulge, teasing him. He grabbed her hair and tugged, hard. “Chloe, dammit … I’m fucking dying here.”

She undid the button on his jeans and pulled down the zipper. He never wore underwear, so she took care not to catch anything as she eased the jeans down his rock-hard thighs. His cock was red, swollen, and already slick with pre-cum. “You’ve missed me, Billy, haven’t you?”

Chloe slid her tongue up and down the shaft, enjoying the contrast between the veins and the satiny skin. Gorgon moaned loudly, tugging on her hair to move her closer. “Come on, baby. Don’t tease me. You know what I want.”

She knew, but the power it gave her to hold back was as much of a rush as the actual act. Chloe licked his balls before swirling her tongue over his shaft again. When she finally took him into her mouth, he groaned loudly and pushed his dick all the way inside.

After relaxing her throat muscles, she curled her lips around her teeth and let him fuck her with the entire length. Chloe massaged his balls with one hand and teased the soft skin between his sac and upper thighs with the other. She always gave her man what he liked.

Her hair hurt from him pulling on it so hard, and her mouth was sore, but she didn’t mind. This domination was what she loved. Because when it was over, he’d hold her all night and caress her skin, telling her over and over how beautiful she was, and how much he loved her. Things he’d never say unless they were alone. Words he spoke only to her, intimacies shared only between them.