Today I turn things over to my fellow Evernight author, Amber Morgan, here to tell you all about Waking the Lioness. Enjoy!

I love a good story. Sometimes I love the story behind the story even more. I signed the contract for WAKING THE LIONESS back in October 2015, but the plot twist is that this is the second time I’ve signed a contract with Evernight for this story.

I gave it a good, critical going-over (five years gives you a lot of time to mentally re-write something, and I must admit, there were a few lines in the original version that made me cringe on-re-reading). I added a bit, changed a bit, and realised it really felt like a story in vein of EXILED ALPHA – strong men, passionate women, and sizzling sex.

So I asked Evernight if they’d like to see the improved version, and they said yes. And then they offered me a brand new contract for it. Huzzahs! So my first release of 2016 is also the re-release of my first story with Evernight – I quite like that symmetry. I can’t wait for you to meet Lara, Zane, and Tate! 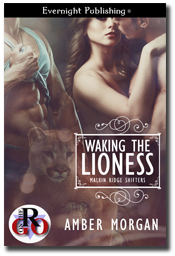 Convinced she could never give her fiance what he truly wanted, cat-shifter Lara Carey walked away from her home and her engagement, and started fresh in New Orleans. One year on, she’s never stopped missing Zane Walker…but it’s too late to do anything about it, isn’t it?

Zane Walker hasn’t come to New Orleans to find Lara, but when chance throws them together, his passion for her is reignited. There’s just one problem. Zane’s new lover is missing somewhere in New Orleans, and even if Zane and Lara find him, can Lara accept him and Zane?

Zane turned his fierce gaze on her, the heat in his eyes forcing her back a little. “You left Malkin Ridge for this?” he demanded. “Serving booze and getting hit on by scrawny creeps like him? Jesus, Lara.”

Face burning, Lara grabbed his arm again and dragged him out of Alchemy. The eyes of the entire room were on her. She saw Luc watching with a frown on his face. This wasn’t going to go down well with him—Luc hated trouble in the bar.

Outside, Lara leaned against the wall, running her hands over her hair. If she’d felt hot and sticky before, she was positively boiling now. The last person she’d ever expect to see in New Orleans was Zane. And yet here he was, larger than life and twice as sexy as she remembered. The shock of seeing him doubled by the second. “You…. What are you doing here, Zane?”

He shoved his hands into his jeans pockets, glowering at the cigarette butts littering the pavement. “I didn’t come looking for you, if that’s what you’re worried about.”

Her heart sank, and she scolded herself silently for her disappointment. She’d left Malkin Ridge to get away from Zane, hadn’t she? Away from the whole Malkin Ridge mountain lion community. She should be pleased he wasn’t here for her. Shouldn’t she?

“Then it’s just coincidence you strolled into my bar?” she challenged when he lapsed into silence.

He stared out at the river, face dark and drawn. People pushed past them, and Lara smelled frying onions, lime, and shrimp from the grill next door. The air over the river shimmered, and Zane seemed fascinated by it. For a few long minutes she thought he wouldn’t answer—and how like him that would be—but eventually he sighed heavily and turned back to her.

“I’m looking for someone. A friend. Tate Beckett.” He fumbled in his pockets again and pulled out a battered leather wallet. He flipped it open to show Lara a photo. A golden-haired youth smiled at her from the picture. He had classic mountain lion coloring—blonde, blue-eyed, fair skinned. Very attractive. He probably wasn’t as young as he looked if he was a shapeshifter.

“He’s missing?” she asked. Stupid question, of course. Zane wouldn’t be here looking otherwise. Something about Zane always robbed her of her wits.

“He came down here three weeks ago to visit family and never came back,” Zane confirmed. “He was supposed to be back in Malkin Ridge three days ago. We spoke. He had his flight booked and everything.” He chewed his lip, anxiety marring his handsome features. “I came down here, scouted around, smelled mountain lion…. I didn’t expect it to be you, Lara.”

He looked at her properly for the first time, his eyes softening, scowl relaxing. “It’s good to see you,” he added. He reached for her, brushed a damp lock of hair from her cheek. His fingers barely made contact with her skin but his touch was still electric, sending little lightning bolts dancing over her skin and down between her legs. She shivered. 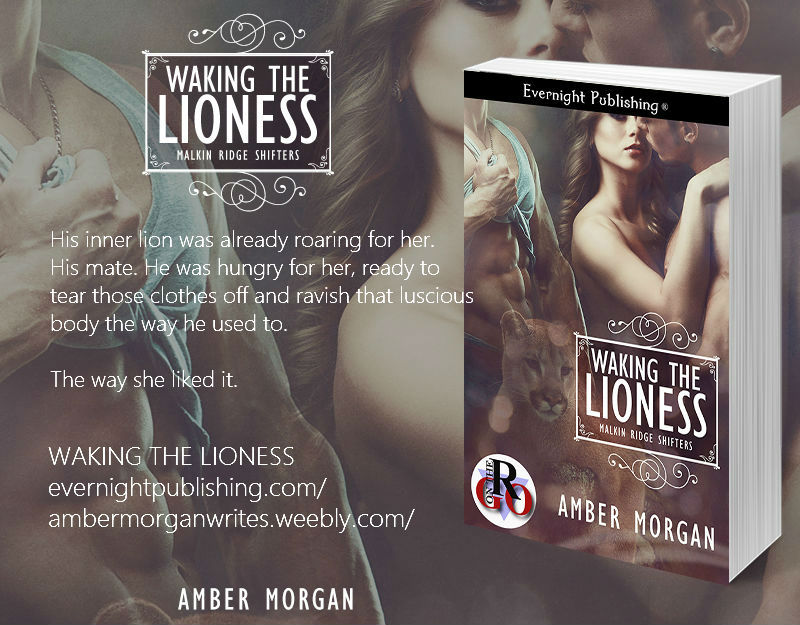 Amber is the secret identity of a writer who normally pens urban fantasy, but feels like stretching her wings. Amber loves darker romance, anti-heroes, good red wine, and expensive chocolate (sometimes all at once). She’s based in the UK and lives in an adorable cottage with her dream man and two stupid snakes.