My fellow Evernight author, Libby Bishop, has book 2 in her Revenant Investigations series out today. Have a gander at the trailer for Ghosts of Trenton House and check out this exciting new release! 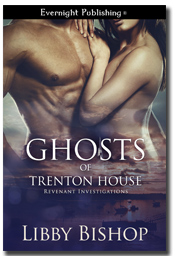 Empath and paranormal investigator Lena Tompson is enjoying a night of relaxation when she’s interrupted by a phone call from her boss. She hurries to the office, still in her pajamas, and finds herself face to face with the once love-of-her-life.

As the case heats up, so do Lena’s feelings for Knox. She doesn’t know how long she can hold back the tide of emotions, especially when she realizes that Knox has feelings for her as well. She can only hope that trusting him doesn’t tear her apart as deeply as his own family will be torn if they fail to stop the fighting.

Oh, how Lena Tompson wished she was still at home, curled up on the couch watching Pride and Prejudice—the Colin Firth version, of course—instead of at the Revenant Investigations office for an emergency meeting. But that wish wasn’t going to come true. When her boss, Folger, had called they all knew to come immediately. She had and now Knox Trenton, the former love-of-her-life, sat in her boss’s office with his forehead creased from worry.

“I’m very sorry to drag you all here at this hour,” Knox said. “But there’s an emergency at Trenton House.”

Arabella Pierce—coworker, medium, and Lena’s best friend—spoke up. “What do you mean?” she asked.

Knox rubbed his eyes. Lena could feel just how worried he was. Having grown up with and seriously dated Knox, she knew this wasn’t normal for him. Something had to be dreadfully wrong in order for him to be bleeding emotions so strongly. As a high-level empath, he was very good at guarding himself, unless unduly stressed or tired.

Lena reached out with her own empathic gifts to search his feelings, and a brick wall slammed down.

“Nana has done something,” he replied, dread lightly imbedded in his tone.

Oh, dear. When his great-grandmother did something to earn that tone of voice it normally meant another feud was brewing with someone, probably a family member. The elderly spitfire was too fiery for her own good, at times. “What did Imogene do?”

“You both know the story of my great-grandmother and her twin sister, Ruth.”

While the story was well known, not many knew the details as Lena and Arabella did. He’d told them in Junior High. And a hell of a story it was.

He turned to Folger. “I’m going to tell you the story, but I ask that you keep it to yourself, for your records. This is a very sensitive issue.”

Folger raised his hand. “What you tell us goes no further than this room.”

Knox sighed. “Thank you. My great-aunt Ruth conjured my great-grandpa Duke’s spirit when he died of a heart attack in his mid-thirties. She wanted to punish her sister for allowing him into the family and betraying her. Their father trusted Duke and had learned to love him as a son, so he willed Trenton House to Duke and Nana. Ruth was furious with her sister for allowing such a thing, saying she was betrayed, even though their father left her and her husband well over five hundred thousand dollars and the country house at the edge of town.” He paused, sighing. “Most of the family believes her objection was solely about Duke’s name being put on the house. I think it’s safe to say if it had been just Nana’s name on the deed, Ruth wouldn’t have been so vehement about the whole thing.”

Lena had been to that country house a few times—a beautiful home, on a lovely four-acre plot of land. But Duke being willed Trenton House and watching it fall into his hands, even with Imogene there, had only been the beginning––the spark, to ignite the rest of the Trentons’ sisterly feud.

Lena had seen no real ‘ill will’ between Knox and his cousins, but their parents… Well, there was a reason she never liked going to the family get-togethers. Their barely veiled animosity was like ice, cracking against her skin. Knox tried to shield her from most of it, but the intensity was too great for him to block it all. Lena tolerated events the best she could, but finally admitted they’d taken a toll on her, and her view of their relationship.

“And no one knows where Ruth trapped Duke’s spirit,” Arabella said, leaning back against the couch and crossing her legs. “Ruth took that information to the grave.”

“Knox,” Folger said, “tell them what Imogene did.”

Hesitation lightly touched the air, held clear in his dark brown eyes when he glanced at her. All thoughts of their past momentarily fled when Lena saw it—something was very wrong, all right, and worry twisted her gut. “Knox?”

He fidgeted in his chair, until he settled for sitting with his back completely straight as if someone had pulled a string upward, and rested his hands on the arms of the chair.

“Nana…raided Ruth’s crypt at our family’s private cemetery and stole a necklace from her coffin.”

Lena’s mouth dropped in shock. “She did what?”

“That’s not all. When she returned to the house and tried to call her husband’s spirit to her, she ended up summoning Ruth instead.”