Like romantic sci-fi? Of course you do. How about bad boy bikers? Well, who doesn’t? Then you’ll want to check out Jessica Coulter Smith’s latest, Hazel and the Alien Biker, available January 15. In the meantime, how about a little peek at the book and into Jessica’s process…

When I’m writing, I tend to either listen to music or listen to a movie. With Hazel and the Alien Biker, I did both. When I wasn’t listening to my playlist, I had a movie on…and these are some of the movies I listened to:

As you can see, I like old movies. I blame my mother. I can’t tell you how many times she watched Overboard, Romancing the Stone, Wildcats, and Top Gun when I was little. And of course, I watched them too (although she covered my eyes for any naked parts). 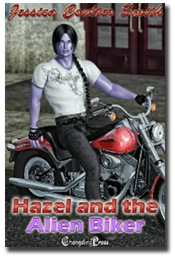 Kicked off his home world after losing his mate, Reyvor has made a place for himself on Earth, spending his afternoons drinking and his nights cruising the streets on his Harley. But all of that is about to change. A commotion outside of his motel room just may turn out to be his saving grace.

Hazel has lost everything, but she’d do it all again if it meant escaping the abusive boyfriend who liked to beat on her three girls and herself. Dumpster diving has never been her favorite thing to do, but she doesn’t have a penny to her name and her girls are starving. But when she’s caught, something miraculous happens.

Reyvor knows right away that the petite woman with the large blue eyes needs him. When he hears that this little ragtag family hasn’t eaten in days, he convinces Hazel to accept a warm meal and a place to stay for the night. The girls warm his heart and remind him of what he once wanted out of life. Is it too late to start over?

Hazel is hesitant to trust anyone again with her heart, but Reyvor is determined to make her his. What’s an alien to do when all he wants is a loving family to call his own? He’ll break down her defenses one by one, until she melts against him and begs for his kiss. But can he claim the feisty Hazel without completely losing his heart to her?

The bike purred to life and he pulled away from the curb. It wasn’t too terribly late, but he knew the upscale stores would be closed. After driving through town, he found one of those large stores that seemed to carry a little bit of everything and decided it would suit his purpose. Human clothes were a mystery to him, but a gaggle of giggling teen girls had been only too happy to help him out. They’d flirted outrageously, even though he was obviously too old for them. He’d been kind and considerate, but had made sure their flirting didn’t go any further.

After he paid for his purchases, he shoved them into his saddlebags and went back to the hotel room he was renting by the week. It was really more of a suite with a separate bedroom and living area, more than enough room for him. Reyvor pulled to a stop in front of his door, turned off the bike, and retrieved his bags of clothes. Inside the room, he put everything away and pulled out the pajama pants the girls had talked him into. They felt soft and he thought they would be ideal for lounging around the room, but he’d always slept naked and didn’t intend to stop now.

He changed, braided his hair, and was about to sit down and turn on the TV when he heard a commotion outside. The panic of a female voice sent him into motion and he opened the door to see what was going on. A very small woman was struggling to break free of the hotel manager. He noticed three small, very scared children, hovering nearby.

“What’s the problem?” he asked as he stepped outside.

“I caught this piece of trash digging through the dumpsters and peeking in the windows. She’s here to steal stuff and I’m calling the cops.”

Her clothes were worn and torn in places, her hair matted and dirty. The children huddling behind her were just as worn and unclean. It didn’t take but a moment for him to surmise that they had nowhere to go and were living on the streets. He’d seen several people begging for money on street corners, but the stubborn tilt of the woman’s chin told him she’d never begged for anything in her life.

“Did you stop to think maybe they were merely hungry and looking for food?” Reyvor asked. “Perhaps if you offered them a hot meal they wouldn’t need to dig through the dumpster.”

“I’m not running a charity here. If they want to eat, they’ll pay for it just like everyone else. It’s bad for business having people like this hanging around.”

Reyvor frowned as he saw the shame flash in the woman’s eyes and the flush of embarrassment on the cheeks of her children. He didn’t know what had happened to her, why she had fallen so far, but in that moment he determined that he would help her in any way that he could. Despite the grime, he could tell she was an attractive woman, and he couldn’t understand why she didn’t have a male watching over her.

“Let her go,” Reyvor said. “I’ll take responsibility for her.”

The manager eyed him and finally released the woman, shoving her toward Reyvor. She fell against him and his arms immediately went around her. She was slight and he worried that it had been too long since she’d last eaten. The manager stormed off in the other direction and Reyvor addressed the tattered creature in his arms. 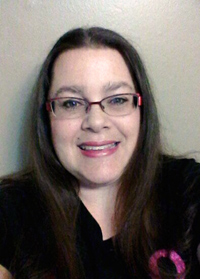 What happens when you get two artistic romantics together? An impulsive marriage proposal – and a woman who says yes (on the first date)! While Jessica’s husband may not have intended for the words “marry me” to pop out on their first date, she surprised him even more by saying yes! That was in 2000 and they’re hoping for many more years together.

Jessica Coulter Smith began writing at an early age, but it wasn’t until 2008 that someone convinced her to have one of her stories published. When she received her acceptance letter in August 2008, it set her on an incredible journey, one she hopes will never end. In 2010, she decided to stay home with the kids and write full-time. It’s a decision she hasn’t regretted, and one that will hopefully result in many more stories to come.