Thanks so much for having me on your blog today with my new release Claimed by her Viking Wolf. You know that phrase.

It started with a kiss.

Well, in my case, and that is true for a vast majority of my stories.

It started with a picture.

This one to be precise.

The lovely Kim posted that hunk in my reader group The RavDor Chicks, and my muse drooled. After some brainstorming in the group, we decided that he was a Viking and a wolf shifter. It all went from there, and Kim’s very own Viking story was born  🙂 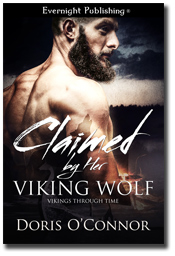 When historical romance writer Kimberly Talbot finds a displaced, injured Viking at her campfire, her life sure starts to get complicated. She can’t leave him there. Besides, what sort of writer would she be if she didn’t take up this splendid opportunity for some hands on research of the sexy Viking god variety?

All she has to do is keep her heart out of the firing line.

Asger, son of Liufr wakes up in a strange, cursed land, out of time, injured, and unable to shift. Drawn to the fire of the flame haired kona by her intoxicating scent and the promise of food and shelter, he has no choice but to trust the woman his wolf claims is their mate, their válað, the very key to his return home.

He doesn’t belong in these strange times, but does Kim belong in his?

A choice has to be made…

Remembering a Burlesque Class she’d attended for research into a story a few years ago, she closed her eyes, and swung her hips to imaginary seductive music. Kim ran her hands slowly up underneath the hem of her blouse, exposing minute amounts of skin in slow motion, while continuing the sway of her hips.

Asger’s sharp intake of breath spurred her on. Letting go of the blouse she ran her hands over her breasts, cupping each heavy mound until she could thumb her own nipples. Shivers of delight chased across her skin, and her clit contracted in need.

A Norse curse made her open her eyes to find Asger had retreated to the stairs. Sitting down, with his legs spread wide, he watched her through hungry eyes, as he stroked his dick in slow moves mirroring the speed of her hands on her tits.

Emboldened she danced closer, slowly unbuttoning her blouse until it fell from her shoulders, and she threw it across to him. Asger caught it with a grin, and the bra that followed.

Seeing him lift the lacy contraption up to his nose and inhale deeply made Kim lose her stride. That was just so damn sexy, as was the way his cock jumped in his hand. The thick head glistened in pre-cum, and Kim licked her lips, desperate to taste him again.

A deep rumble rose from Asger’s chest. She tore her gaze away from the sight of his cock, ran it up the ridges that made up his abdomen, over the ink gracing his side and chest into the bearded column of his neck, and the proud lines of this warrior’s face up to his softly glowing eyes.

“Not that slow, kona. I want to see my cunt. I want to see it weep with its dew, ready for my tongue and my cock. I want to taste you, devour you, until your only thought is me. I want you.”

All finesse went out of the window as Kim unsnapped her jeans and yanked them down her legs, taking her sodden underwear with them. She stumbled in her haste to kick off her shoes and her jeans, and braced herself for impact. Instead of the floorboards coming to greet her, however, she found herself on the stairs draped over Asger’s knees. The first sharp slap of his hand on her ass cheeks stung like crazy.

A second and third swat followed interspersed by the deep, menacing growl of his wolf. The vibrations of that sound trembled through her body and settled straight in her clit, so that the fourth, fifth, and sixth swats didn’t hurt. They set her ass on fire, for sure, but the pain added to her arousal. Again and again those blows came, until she lifted her butt into each one, and moaned her denial when he stopped. She was dimly aware of being lifted and the feel of the stairs carpet under her knees and forearms, as Asger moved her into position as though she weighed nothing.  In this position cool air rushed across her swollen pussy lips.

“So beautiful with your red ass, and wet, sweet cunt. I want you to scream when you come against my tongue, do you hear me, kona? All the way up these stairs, and if you’re a good girl, you will get my cock. If not…”

Kim gasped and her knees buckled at the first bold swipe of Asger’s rough tongue along her exposed slit, and Asger chuckled into her swollen labia.

“We will just have to start all over again.”

Her clit quivered in need, and yet more of her juices trickled down the inside of her thighs. Asger lapped them up with an appreciative rumble, and then swatted her ass.

“Start crawling up one step, kona. I want to be comfortable for my meal of fresh cunt.”

Oh, good lord. Is he going to make me crawl up these stairs with him eating me out? I’m never going to survive this.

Somehow she managed to follow that command, and several more licks of his far too talented tongue were her reward. Kim groaned and moaned as he took her up the rungs of arousal with every step they managed that way. When she slipped, his hands dug into her hips to hold her still, and seemingly satisfied with her, he renewed his efforts. Up and down her slit he lapped up her arousal. He nibbled and teased, and when he ran his tongue up to her anus and circled the tight ring of muscle, while simultaneously pushing two fingers into her wet channel, Kim did scream. Asger finger-fucked her with devastating precision, curling his digits until he found the spot designed to drive her wild with need.

Kim tensed, shook, and then exploded as her orgasm burst from her with an intensity that took her breath away, as his tongue breached her anus. With her ass up in the air, her elbows on the stairs, and his broad shoulders supporting her body she was spread obscenely wide and unable to move—completely at the mercy of this man—as he wrung every last shudder out of her. Only then did he withdraw his fingers, and swatted her butt cheeks again several times in quick succession.

“Start crawling, kona, if you want my cock. He’s mighty eager to sink into your body, but only if you do as you’re told.”

Stalk her in these places