What better way to kick of a Sexy Sunday than with a sizzling new paranormal release from Michelle Roth? I’ll let her tell you all about Bite Me, the second in her The Transfigured Ones series!

Hi there, everyone! I’m Michelle Roth and I’m here to introduce my latest release, Bite Me. It’s the second in my vampire paranormal series, The Transfigured Ones. Magnus Corbett, my hero, was modeled a bit after Gordon Ramsey. I wanted him to be a rough around the edges guy who didn’t necessarily have time for love. I knew, whoever I matched him with would either need to be a bad ass chick who didn’t take any crap.. or she’d need to be so sweet that she called to the softer side of him. Caroline Lundquist is both of those things.

If you’ve got any questions about the book, for me as the author, or about the series in general, feel free to use the #transfiguredones hash tag and I’ll do my best to answer! 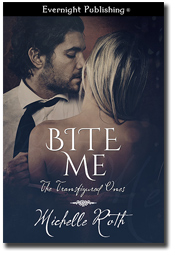 Magnus Corbett is the world renowned head chef for Usquebaugh, the wildly popular restaurant and whiskey bar inside the Foxwood Hotel and Casino. He’s certain that it was his status as one of the Transfigured that put him on the map. It will be bold flavors and his tireless work ethic that keep him there. And, if he has to be a little blunt to get things done? So be it.

When bar manager, Caroline Lundquist, develops a line of cocktails to breathe some life into the drink menu, she’s determined to have new gin-inspired dishes to pair with them. During their collaboration she finds herself falling for the side of Magnus that people rarely see. He’s sweet. Compassionate. Caring. As they begin to navigate the perils of a vampire-human relationship, both of their pasts crop up, threatening to destroy everything they’re working so hard to build together.

“That’s nice, but,” he said, frowning at her, “I really hate to bring this up but… I see no nudity or coffee, Caroline. You can’t promise things like that and then not follow through. It’s cruel.”

Smirking, she said, “You were gone for almost an hour after we talked. I assumed you forgot about me. So I drank your cup and then I took care of myself.” She gave a little shrug.

“No. I didn’t,” she said, confessed, laughing. “I did drink the coffee though. Then Lilly called me to tell me about the reviews and I got caught up in that.”

“New rule,” he ordered, his focus single minded. “You don’t get to play with your pussy unless I’m supervising.”

Caroline made a pouty face. “Not even a little bit?”

“Not at all, sweetness,” he corrected. “And I never said you could borrow my shirt, love. I’m going to need it back now.”

“Sorry,” she replied, giving him an unrepentant grin. She pulled the shirt up inch by tantalizing inch until he realized she wasn’t wearing anything under it.

“That’s it, love,” he said scooping her up and setting her on the edge of the island counter top.  Then he picked up the hand that held her cell phone and suggested, “Read me a review. One of the longer ones because we’re going to be here a while.”

Caroline set the cell phone down and leaned back, watching as he shifted her thighs apart. When he ran the tips of his fingers along her damp folds, she let out a shuddering sigh.

“Someone’s a little needy this morning, isn’t she?” he asked, kneeling so that he was eye level with her pussy.

“And I am for you too. Always,” he promised. “Why aren’t you reading?”

Magnus nodded, and then blew a gentle stream of air against her heated flesh. When she started to wriggle, he murmured, “Hold still, love. Let me…”

Gently he pulled her labia apart with his thumbs and swiped his tongue from her opening to her clit and back again. “God, love. You taste so fucking good. It’s a shame I won’t be able to continue until you start reading.”

Caroline moaned, balancing herself back on one arm and picked up her cell phone. A few taps on the screen later, she gave an annoyed huff.

Magnus resumed his task, swiping his tongue against her inner thighs, nipping gently at the sensitive skin there.

Caroline’s voice was somewhat broken when she began to read. “I had the— distinct pleasure of spending my evening at Usquebaugh. As always, the atmosphere lively, the food amazing, and the drinks sub-sublime. Magnus!”

He took his time, moving his mouth to her pussy, drawing slow circles around her clit. He periodically dipped his tongue down to fuck her with it until she was panting.

He buried three fingers inside her as far as they would go, fucking them in and out of her slowly, then lifted his head and said, “I need you to keep reading for me. I’m very interested to know what they thought of the individual drinks.”

“Owner Lilly Ferguson put together the ultimate—” she broke off, gasping.

He stilled his tongue and fingers and waited until she began to speak again.

Her voice almost a high pitched, needy wail, she continued, “—dream team of chef Magnus Corbett and bartender Caroline Lundquist. The dishes display the usual competency and flare that Magnus Corbett has always been known- been known for. However, the real surprise of the evening was the new line of…”

Michelle Roth is a novelist from the Great White North (Toronto, ON). When she’s not disappearing into foreign lands, or making two perfect strangers that she invented fall in love, she’s probably curled up somewhere with a glass of wine and a good book.

In her spare time she is typically hanging out with her awesome boyfriend and their two equally awesome cats. She likes taking road trips to nowhere in particular, cooking elaborate meals then making other people do the dishes, and being nerdy on the internet. Her books are currently available on Amazon, Nook, Kobo, and any other place that sells absolutely filthy romance novels.