Happy weekend everyone! Guess what? I’ve got the lovely Doris O’Connor back today with her new release, The Job. Take it away, Doris!

Thanks so much for having me on your blog with my new release The Job.

Enter the world of the escorts of Premiere Companions, the elite escort service in London, used by business men like Nathanial Longton. He prefers to deal with professionals when he needs some eye candy on his arm. The ladies provided by the agency know the score. No false pretences, none of the not so subtle claims on his status and bank balance. He can simply take the sex on offer—indulge in his baser needs, if the lady consents—part company in the morning with none of those messy emotions thrown into the mix….

Until the door opens to reveal his escort for the charity ball, and the sins of the past catch up with him. Alex is the one woman that got away, and that will never do. He will get to the truth, come what may. 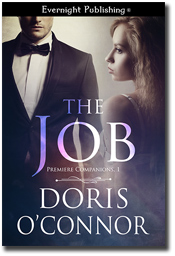 Accepting money for sex is wrong—isn’t it?

Alexandra Farrington certainly thinks so. The job she’s agreed to do for her friend is not supposed to involve any sex. However, no man spends this much money on a swish hotel suite and sinful lingerie, and not expect the horizontal shimmy in return.

And what sort of man employs escorts anyhow?

Nathanial Longton cannot believe his eyes when the door opens to reveal his companion for the evening. He has never forgotten the housekeeper’s daughter. The girl he grew up with has grown into a beautiful, sexy woman, and what’s more she’s all his for the night.

Alex and he have unfinished business and, with her at his mercy, it’s payback time.

If only this was just about sex, but Alexandra’s submission awakens much more than his inner Sadist….

Love is far harder to ignore.

“Staying then, sweetheart?” he asked.

Alex’s fingers itched to wipe that knowing smirk of his face.

“Get off on blackmailing women to do your bidding?” She flung the words at him, inwardly grimacing at the breathy quality of her voice. Her heart beat faster when he straightened up and walked toward her. His long limbed gait ate up the distance between them. Every instinct screamed at her to run away, but her limbs didn’t seem capable of following the demands of her rational brain. Besides where would she run to?

She was bought and paid for, after all. Alex would do anything to spare her frail mother any embarrassment. It’s why she had embellished her current work situation to her. Mum didn’t need to worry over her. Besides Alex was doing fine. She had a roof over her head and food in her belly, which was a lot more than some people had, so she couldn’t complain really.

“You have no idea what I get off on, Alex, but if you’re a good girl and do as you’re told, you might just find out.”

Oh, the infuriating male. His words served to escalate the flame of her arousal into a fever pitch, as he stopped so close to her that the heat off his body scorched her skin. It took every ounce of will power she possessed to not lean into his strength and warmth, to let him take away her worries. Now where had that thought come from, for fuck’s sake?

Alex jumped when Nathanial put his large hands on her shoulder. He slid them slowly upward until he framed her face and tilted her head up. The gentle pressure he used was strangely comforting.

Her pent up breath burst forth with such force that she ruffled the stylishly unruly dark lock of hair that fell over his forehead. His amber eyes crinkled up at the corners in seeming amusement.

“That’s better. You were in danger of passing out on me then, girl. As much fun as being the cause of that can be, I do need you sentient tonight. Later on, well, we’ll see…”

“I told you already, I won’t sleep with you, or are you going to blackmail me into that too?” Alex immediately regretted the words, when his brows drew together in a frown. His hold on her tightened imperceptibly, and she couldn’t bring herself to hold his gaze.

“I realize that you may not have the highest opinion of me after the way we parted back then, but—”

He stopped speaking when she couldn’t help her most unladylike snort of derision. Grasping her chin, he forced her to look up at him. Alex wasn’t small, but even in her killer stilettos she was still a head shorter than him. It made her feel all sorts of dainty and feminine, which was definitely a new sensation. Her stomach churned anew at the disapproval that was edged in his features.

“Has no one told you it is rude to constantly interrupt? If you carry on like this, I’ll be forced to put you over my knee to teach you some manners, girl.” He smiled when her mouth fell open in surprise.

Alex automatically clenched her thighs together to stop the hot flood of arousal creaming her pussy at those mental images.

Alex liked a little, or should that be a lot of kink in the bedroom. Someplace she was so not going with him.

“You have bought my escort services for the evening, Sir.” She meant that intonation as an insult, but the way his eyes flared in heated awareness and his breathing sped up, told her what she was beginning to suspect. Nathanial would indeed be more than capable of fulfilling her needs. That meant she couldn’t let him near her. He would break down her barriers and she was not prepared to risk her heart—not again.

So instead, she pushed him away. Alex breathed a sigh of relief when he let her go.

“But that’s all you’ve bought. You can’t force me to do anything sexual, and—”

“Dammit, Alex.” His frustrated growl and the way he ran a hand through his hair, as he started to pace the floor in front of her stopped her from saying the rest. She hugged her arms around herself and bit her lip instead.

When he eventually stopped in front of her again, he indeed looked ready to put her over his knee. She stopped breathing when he reached out to her, stopped halfway, and curled his hand into a fist, dropping it to his thigh instead.

“Do you really think that little of me?” he asked.

Stalk her in these places: 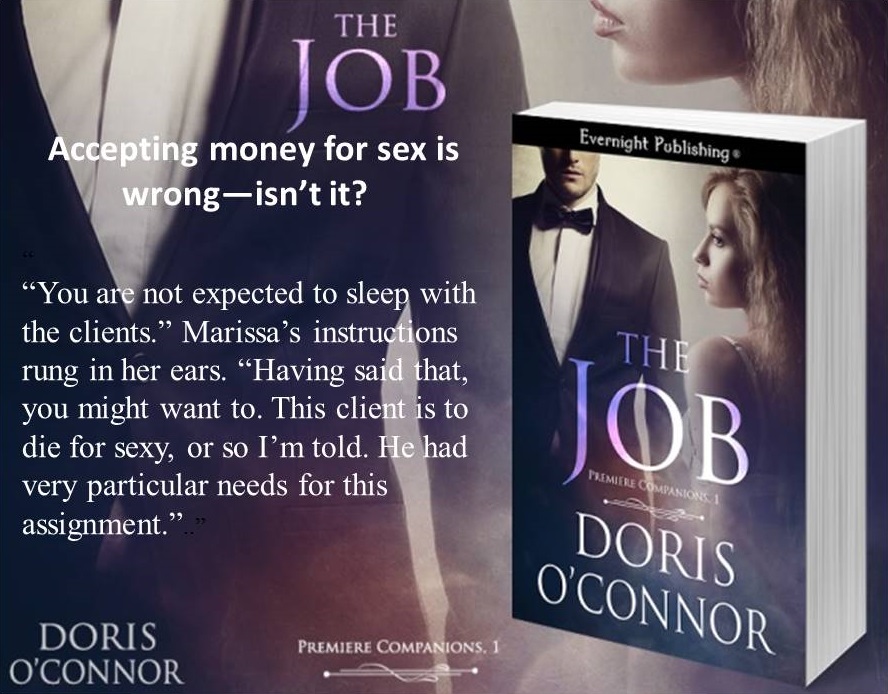