I so enjoyed writing ‘Heart in Chains’. I’d just written, MM romance, ‘A Forever Kind of Thing’ for an Encompass Ink anthology to be released later this year and I was still in MM story writing mode.

Connor and Jay my heroes just gelled in my mind immediately as I considered the kind of adventure Connor might have on vacation in an exotic place such as Indonesia. Jay is a mysterious character, tough, driven, but on the verge of changing his dangerous life when he meets Connor. Connor is still getting over a relationship break up, but it’s been long enough and he’s tired of being single. His former boyfriend’s betrayal stays with him, but as soon as he sees Jay, attraction is seeded in his heart.

These two characters are dear to me. Tenderness lies beneath Jay’s composed and tough exterior and courage lies beneath Connor’s sexual vulnerability. I think both will surprise you as you read their story. 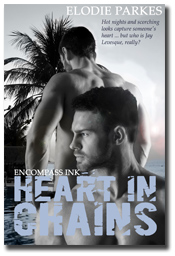 When Connor Douglas takes a tropical island holiday, he hopes to leave heartbreak behind. Little does he know the extent of the danger and sexual temptation that awaits him.

Long after Jay Levesque has closed down his operations on the very same tropical island, the memory of Connor haunts him.

Warm nights and scorching sex has someone’s heart in chains.

Darkness was falling as Jay arrived back with another man. They carried a tray each and the other man carried a stool. The other man left, but Jay smiled at Connor as he waited by the bed. Jay flipped a switch on the wall by the door and lit the place. Light streamed downward from the little white coolie-hat shade.

“Come, let’s eat.” He indicated the chair and sat on the stool himself.

Connor dragged his chain as he went to the table. He sat and took the cover off the plate of food. It looked good and the fish was already cut up, which was great since there was no knife, only a fork by his plate. He didn’t expect to be hungry, but after tasting the food, he ate almost all of it before he put down his fork and gave a sigh.

Jay ate slowly. When Connor stopped eating so did he and he placed his fork on the tray.

“It’s good to see you eat. Kiku, the man who brought the food with me, is going to bring coffee. Tell me about yourself.”

Connor turned to face Jay. He felt better after eating. “I don’t get it. Why do you want to know? Why are you being kind?”

Jay frowned. “There’s no need not to be kind. Humor me. Tell me a little about yourself.”

Connor shrugged. “I’m a marine biologist. I’m on vacation. I needed something completely different in my life for a time. These islands seemed like a good idea, far away, warm, beautiful, and …” He stopped talking. What’s the point in this?

Jay pushed his dark hair back from his forehead and folded his arms. He smiled.

“Far away. From what, Connor? A love affair gone wrong I think.”

Connor looked down at the remains of his food in confusion. Did he really want to tell his captor about his heartbreak?

Before Connor could react or even know what was happening, Jay reached out a hand and slipped it around Connor’s head. He swooped on Connor’s mouth and kissed him.

The kiss was so unexpected and yet so delicious, Connor closed his eyes and let it happen. He drifted in the soft merge of Jay’s lips on his. The lingering pressure and the way Jay brought his other hand up to caress the back of Connor’s neck was addictive. Connor leaned into the embrace. His cock hardened. Tingles from the circle of Jay’s fingertips on his neck spread down his spine and made his ass feel melted. Thoughts left him. The only thing that mattered right then was the kiss, and he lifted his hands to hold Jay’s muscled shoulders and kiss him in return.

It was Jay who drew away from the kiss.

Connor leaned back in his chair then, shocked at his response. 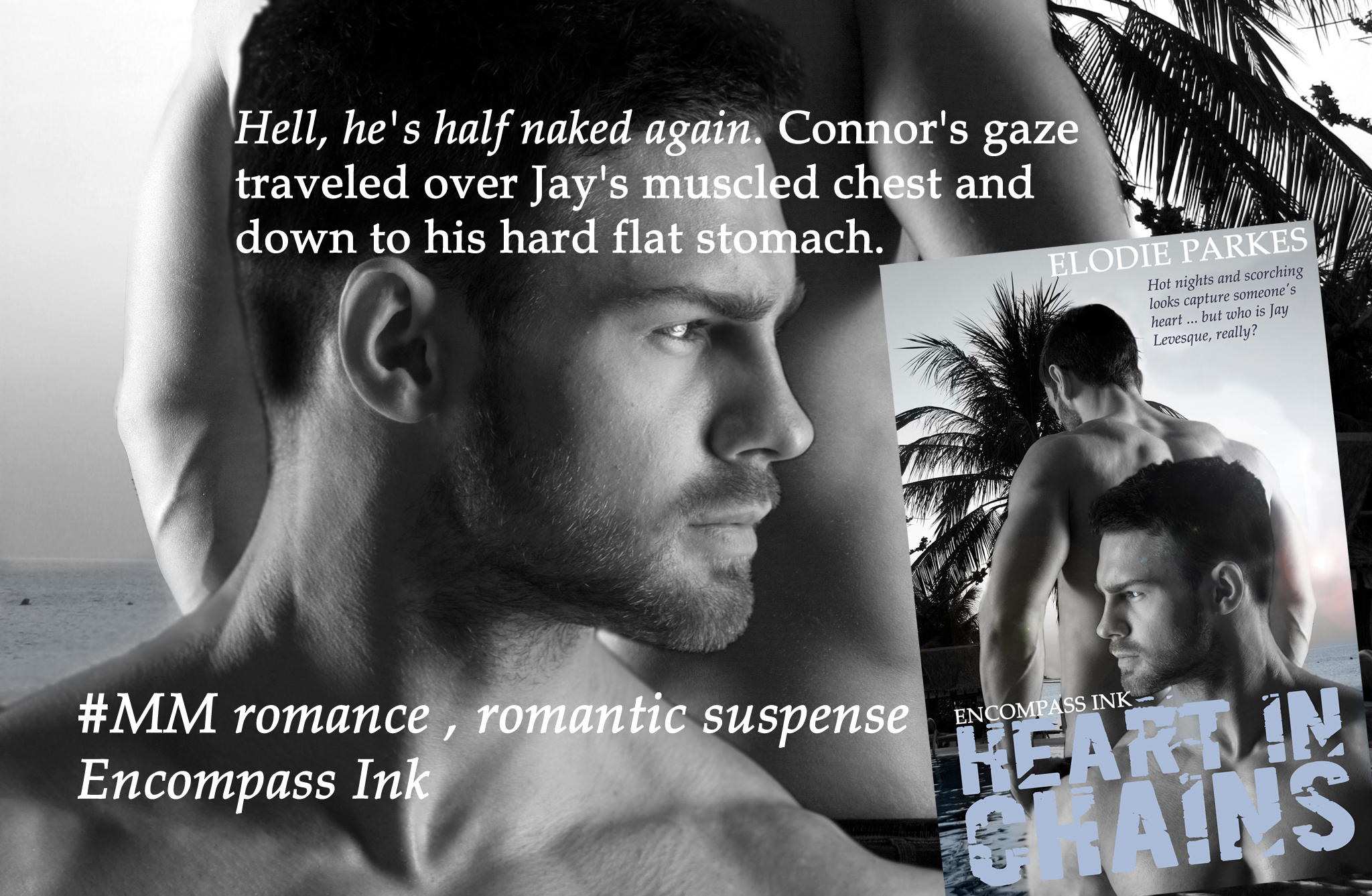 I’m a writer who is in love with happy endings, currently based in southern UK.

I love: music, art, flowers, trees, the ocean. I work with antiques by day and words by night. Like a vampire, darkness is my friend, that’s when the silence is only broken by an occasional hoot of owls in the woodlands opposite my home, and I write.

2 thoughts on “#GuestBlogger Elodie Parkes with #NewRelease Heart in Chains”