I’ve got the delightful Rose Wulf here today with the latest in her Night Magic series, Lost in Magic. 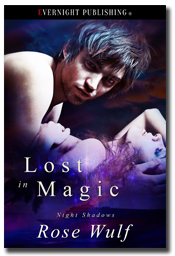 Nearly a year after losing her best friends to vampires, Allison Drake knows it’s time for a change. And a nice cruise to the Bahamas sounds like just the ticket. She meets a sexy man on day one and knows it’ll be the vacation of a lifetime. But she’s not prepared for passengers to start disappearing under mysterious circumstances, or the implications that follow.

Mick Darringer is on the cruise not for the destination, but for the distraction. He needs to lay low and he knows the Council would never think to look for an earth witch on a cruise. It wasn’t part of his plan to meet a beautiful woman, but he’s not about to walk away. Ali captivates him from the moment he lays eyes on her.

But it’s not long before they learn that this cruise has problems. Problems in the form of vampires. 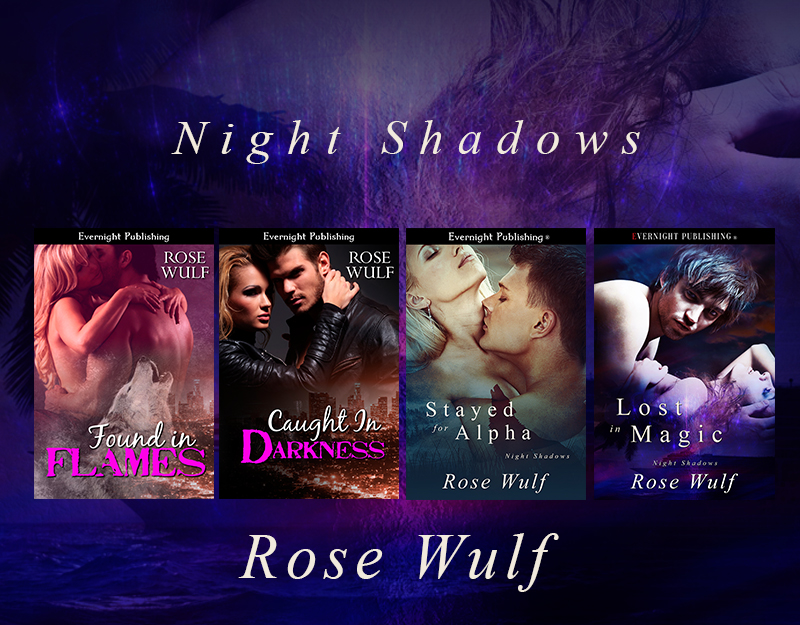 I should call Mick. He was bound to start worrying. And it wasn’t like she didn’t want to hear his voice. She was just worried the distance of a phone call would actually make her feel worse. You’re stalling. But calling herself out on her cowardice didn’t seem to be working this time.

Ali nearly jumped out of her skin when someone knocked loudly on her door.

She tightened her arms around herself and looked toward the locked door. Would it be Warner again?

“This isn’t over, Ali,” Warner had said with one hand on the door handle. Whether he’d actually said it as a threat or she’d simply heard it is as one she’d never know. But it’d been nearly half an hour since that conversation and he didn’t strike her as patient.

I wish these doors had peepholes. She didn’t understand why those things weren’t standard. But sitting alone on her bed wasn’t going to chase away whoever was at the door. Just answer it, tell them off, and then call Mick. He was surely waiting. It’d been a few minutes now since the announcement that the impromptu lockdown was over and they were all free to roam about the ship again. There was even the chance, she supposed, that the person at the door was Mick.

That was the thought that finally propelled her to her feet.

Still, her stomach clenched as she slid back the deadbolt. Just a peek. Mick was probably waiting by his phone. Why would he be worried about her?

It was a long moment before Allison realized she was staring into concerned green eyes. Gorgeous, familiar green eyes. She almost felt like crying. Almost.

“Mick?” As if that face could belong to anyone else.

“Ali,” he said on an exhale. There was an echo of fear in that voice. “I was worried.”

Her heart swelled and she opened the door properly, managing a smile. “Come inside,” she said. She didn’t want to be out and about in her hall at the moment.

Mick didn’t need to be asked twice. He stepped in, waited for her to shut the door, and then promptly pulled her by the hips up to his chest. He found her lips hungrily and she moaned as his tongue slipped into her mouth.

Ali curved her arms around his shoulders, letting one hand thread its way into his hair as their tongues danced. There was something in this kiss. Something more than attraction and opportunity. And whatever it was, she liked it. Wanted to lose herself in it.

Which was probably why he released her lips moments later.

“Are you okay?” he asked, his voice thick and his hands still heavy on her hips. Possessive. Comforting.

Stupid tears threatened her eyes for a moment but she fought them back and rested her head on Mick’s strong shoulder. Lie. Tell him yes.

“What’s wrong, baby?” This question was soft, washing right through her, punctuated by the arms he wrapped around her waist.

She hadn’t really wanted to lie to him, anyway.

Behind the scenes Rose is a quiet personality. She enjoys spending her non-writing time with her German Shepherd, Shadow, her mom, and her friends. Be it a fun game of Cards Against Humanity or a relaxing movie night, Rose believes everything is better with company. As for her own romance, she’s still searching for her hero (and hoping that, when she does find him, he’ll be willing to cook!).