Is there anything hotter than a tatted up bad boy rolling into town on a Harley? Nope. Didn’t think so. I’ve got author Beth D. Carter here today to tell us about Mad Delights, her smokin’ hot, suspenseful tale of an MC ménage!

Thank you so much for having me on today!

Way back in the stone ages (AKA: my twenties), my then-husband wanted a Harley.  He began growing a goatee and quizzing me on the differences between a Panhead, a Shovelhead, and an Evolution.  We bought a Harley Sportster and painted it cherry red.  I wore a helmet and jacket with red flames and he made the unfortunate mistake of wearing a head bandana with tomatoes on it.  Guess what his riding name became?

We had a local hillbilly bar that served free lunch on Sunday.  I’m talking corn beef and sauerkraut, fried chicken, or beef stew.  It was a weekly tradition with us and our little riding community.  One Sunday, as we’re sitting around enjoying free food and pitchers of beer, in walks a group of tatted up men and women, wearing denim vests.  My husband and his friends froze, leaned over to us and told us to get up and get the hell out of the bar. Quickly.

The Pagans had just walked in.

I didn’t know the Pagans from Adam and only later did I learn they were an outlaw biker gang, as notorious as the Hells Angels.  And little did I suspect that I would draw upon that experience as I decided to write motorcycle club romance.

In Mad Delights, I wanted to dream up a new heroine.  In the Red Wolves MC, my heroines had to find the power and strength inside themselves.  In this book, Chloe already is a bad ass.  She’s had to be.  Her past isn’t pretty…at all.  The first thing I had envisioned her as was saving her two men, wearing leather, à la ninja style.

I do have to warn people that Chloe is…slightly crazy.  When she’s angry, she acts out in ways that most of us would never think of doing.  Her filter of right and wrong was compromised when she was young, and as an adult she has a difficult time recognizing when to not act on her aggression.  I enjoyed bringing her to life, and I hope you enjoy reading about her. 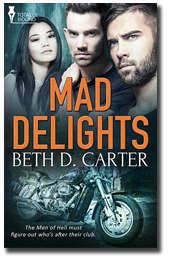 Unbeknownst to him, Romeo Barrigan has someone watching his every move.  Chloe Matsumoto’s favorite pastime is studying the president of the Men of Hell MC. She’d become fascinated with him ever since he helped rescue her deaf cousin from the hands of a vicious human trafficking ring, and now wonders how she can repay him.

Daxton Squire is the Enforcer of the Men of Hell.  He’s filled with self loathing over not recognizing the threat from the former president.  When he spots someone tailing Romeo, he vows to protect him at any cost.  Only he didn’t expect to be so attracted to the little stalker.

Violence sweeps through the small town of Bair, Nebraska, threatening the town and the club.  Romeo has a lot on his plate.  Not only does he have to figure out who’s after his club, he’s got to figure out how the hell he ended up in a ménage relationship, as well as keeping those he loves safe from the menace.

A series of sounds echoed through the junkyard. Pop! Pop, pop, pop. Silence.

Dax cautiously peered around the car again. “What the fuck?”

“What is it?” Romeo asked. He then looked too.

Dax stared in disbelief at Chloe as she calmly walked toward them, dressed like she came from The Expendables, all in black with her ponytail swinging back and forth in time to her steady gait. In one hand, she clutched a gun with a silencer as she cautiously looked around. In the other hand, she held a black canvas bag.

“Why the hell is she here?” Dax wondered.

Dax threw him an exasperated look. He didn’t have time for this right now. He quickly suppressed the jealousy that surged through him at Romeo’s statement. He had no reason to feel anything but annoyance and anger that she’d disobeyed his command.

Chloe spotted him and sashayed her cute little ass over to them, as if she were taking a night-time stroll through a park. As soon as she was close enough, he grasped her arm and yanked her behind the car tower.

“There are men shooting,” he snarled. “Did you not listen to a word I said?”

“I took care of those men,” she said calmly as she removed herself from his tight grip.

“Romeo, you’re hit!” she cried. She scrambled over to him to survey the bullet in his arm. “It’s still in there.”

“I know,” Romeo said through tight lips. Pain bracketed every line on his face. “Hi, I’m Romeo Barrigan. Nice to meet you. I hear you’re my stalker.” 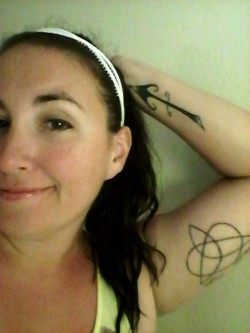 I like writing about the very ordinary girl thrust into extraordinary circumstances, so my heroines will probably never be lawyers, doctors or corporate highrollers.  I try to write characters who aren’t cookie cutters and push myself to write complicated situations that I have no idea how to resolve, forcing me to think outside the box.  I love writing characters who are real, complex and full of flaws, heroes and heroines who find redemption through love.

I’ve been pretty fortunate in life to experience some amazing things.  I’ve lived in France, travelled throughout Europe, Australia and New Zealand.  I am a mom to an amazing little boy.  I’ve walked a red carpet event and visited the USS Voyager. I hate washing dishes but I love cooking. I hate washing clothes but I love wearing them. Writing my bio is difficult because I never know what to say so I hope you like this one.  My favorite color is red but I look best in black (it’s slimming).  I hate people who don’t pick up their dog’s crap in public places, people who don’t use turn signals, and I really hate people who are rude and condescending. I especially hate discrimination in all and every form.  And although I love holding a book in my hand, I absolutely adore my ereader, whom I’ve named Ruby.  I love to hear from readers so I’ve made it really easy to find me on the web: Twitter, Facebook, Tsu, My Website, My Blog, and my Amazon Author Page.