That’s right! It’s release day and I, for one, am thrilled to be in such esteemed company! Everight’s newest Anthology offerings, Bad Alpha and Bad Alpha: Manlove are here and they are HOT! My story, Destined, is part of the Bad Alpha: Manlove collection, so I thought I’d share just a wee taste…

Shifters so ruthless they will stop at nothing to protect their pack, these Bad Alphas are dangerous men with an animal side that rivals their human fierceness. Feared, inked, they take what they want, never give in to their enemies, and think love is for the weak—until they meet their mate. Are you ready to learn how to tame a savage heart? 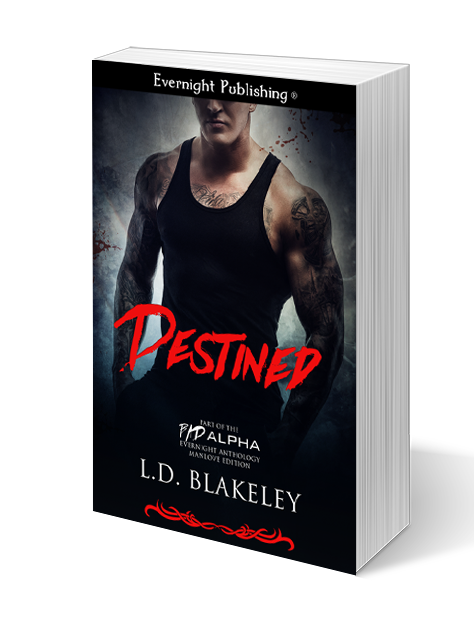 Caleb Stokes has had a shit night. Too bad catching his boyfriend in flagrante delicto with the club DJ isn’t the worst thing he’ll witness before the night is through.

Marick Gevrees has no time for romance. He has even less time for a tipsy twink looking for a man to fill some Daddy fetish. But what the hell is he supposed to do when said twink wanders head-long into the middle of a bloody vendetta that could result in the exposure of his clan?

Without another thought, Caleb turned and ran back toward the big, black truck. The sounds of ripping flesh and carnage were all he could hear as he ducked down and crawled beneath the truck, hoping it would provide some kind of shelter.

Jesus Christ! When he’d bitterly wished ill on Anthony and his new boy toy, this sure as fuck wasn’t what he’d had in mind.

Terror and the night air had double-teamed Caleb with a ghastly chill and he couldn’t quell the uncontrollable shiver that now wracked his body. He hadn’t been to church in years, but Caleb was seriously contemplating prayer. Surely someone would come out and find him. He wriggled around enough to grab his cell phone from his pocket to check the time. 1 am. Dammit. Another hour until last call. What the hell was he going to do? Call 911? Yes! Call 911. Cops carried guns. Guns could shoot whatever the hell that thing was and Caleb could go the fuck home.

As he swiped the phone to wake it up and dial, Caleb heard a high-pitched feral yelp followed by… nothing. The hellish noises had stopped. Was the creature gone? Could he—oh fuck! Caleb held his breath as he saw the sturdy gait of the animal as it crept toward the truck. He could only see its legs and its dark, dangerous claws, but he didn’t need to see more to know this wasn’t going to end well. A loud thump drummed overhead and the truck’s heavy shocks groaned.

Jesus Christ! Was that a body?

Caleb screwed his eyes shut and started that prayer.

“You can get out from under my truck, now.”