Happy Friday! Have I got a treat for you today: book #5 in Ravenna Tate’s aweome series The Weathermen. That’s right, A Slow Burning Dance is now available from Evernight Publishing! 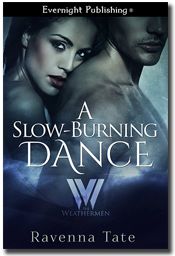 When Sela Chavez inspects the unit in a strip mall that will soon become her very own dance studio, she’s on the cusp of a dream come true. Until she spies Damien Rivera, her brother’s boss. She knows he’s financing the project, and she knows he’s a player.

When he invites her to a concert, she can’t seem to look away from his gaze. But gorgeous eyes or not, she has no intention of becoming Damien’s next conquest.

Damien is part of a group of friends financing the efforts to put a stop to The Madeline Project. The program now has a mind of its own, thanks to a virus called Tommy Twister. These men have power, resources, and money, but they’re as ruthless and possessive as the storms ravaging Earth.

He moved to the edge of the bed and pointed toward the floor. “On your knees.”

It didn’t matter either way to her, but there was something quite decadent about kneeling in front of a man to suck his dick. She slid off the bed and dropped to her knees. At least the bedroom was carpeted. It would have been painful kneeling on the stone downstairs the way he had done for her.

Damien groaned softly and held her head with both hands as she licked him from his balls to the tip of his cock, and back again. She tortured him as he’d done to her, enjoying the way his soft groans grew louder, and the grip on her head increased.

Sela took several inches at a time into her mouth and sucked, alternating that with moving her lips up and down his shaft, increasing the length she took inside each time. He squirmed on the bed for several minutes, and then he pulled his cock away from her. “I can’t take it. I don’t want to come in your mouth. I’ve changed my mind.”

The tender look he gave her melted her heart. “I’ll keep that in mind, but I want to fuck your hot pussy again. Come back up here and get on your hands and knees.”

She couldn’t have disobeyed that voice if she’d wanted to. Sela crawled onto the bed and did as he asked, then moaned softly as he caressed her ass cheeks and her soaking wet pussy. “You have the most gorgeous ass I’ve ever seen.”

He nipped at each cheek, and she giggled. “I could eat you up, Sela.” The mattress shifted, and she watched him grab one of the strawberries they hadn’t eaten. Thinking he was going to put it into his mouth, she gasped when he rubbed it slowly over her ass cheeks and the backs of her thighs, following each pass of the berry with his tongue.

The stickiness of the strawberry, coupled with his hot tongue, was surprisingly arousing. She moaned softly as he plucked another berry off the plate and rolled her onto her back. He straddled her at hip level, and rubbed the fruit over each breast, sucking and licking the juice off her. When he finally stopped, he kissed her, and he didn’t seem to mind that she was sticky. After he released the kiss, he crawled off her and asked her to get on her hands and knees again.

“Well that was new,” she said.

Damien caressed her pussy from behind. “Did you like it?”

“Then I’ll have to experiment with other things.”

Her orgasm was so close she could hardly stand it. “Like what?”

He kissed her lower back. “And I’ve never known anyone as fun and adventurous as you, Sela. Thank you for this.”

Before she could answer him, he slid his cock into her pussy. She moaned loudly as he thrust deep and hard, and just as she thought she was going to come again, he pulled out and picked up one of the berries again.

Sela moaned softly as he rubbed it over her pussy. Her arousal shot through the roof. She’d never imagined being covered in strawberry juice would feel this incredible. She wanted him to keep going, but when he licked her from behind, she cried out in pleasure. Kink with fruit. Who’d have thought it could be this much fun?

As he continued to use his tongue to send her excitement to new heights, he reached underneath with his left hand and played with her clit. She pushed back against him, arching her back and silently begging for release, but he stopped before she came.

He chuckled and kissed each ass cheek. “Do you think I’m not ready to explode?”

“I think you’re having way too fun much torturing me.”

He sank his dick into her pussy again, fucking her so slowly she thought she’d go out of her mind with need. At the same time, Sela enjoyed it far more than she could process. “Sadist,” she muttered.

His comment made her laugh, but that soon turned to loud moans as he fucked her rougher now. He still didn’t let her come, but Sela was loving this. When he pulled out and returned to rubbing the strawberry over her ass and pussy, she sighed, closed her eyes, and simply let go. Sela wanted to experience all the sensations without analyzing them or worrying about the impending orgasm. This was way too much fun to ask him to stop.

“Are you enjoying this?” His soft, smoky voice sent shivers down her spine.

He caressed the side of her breast. “I want you so hot for me that you can’t stand it.” 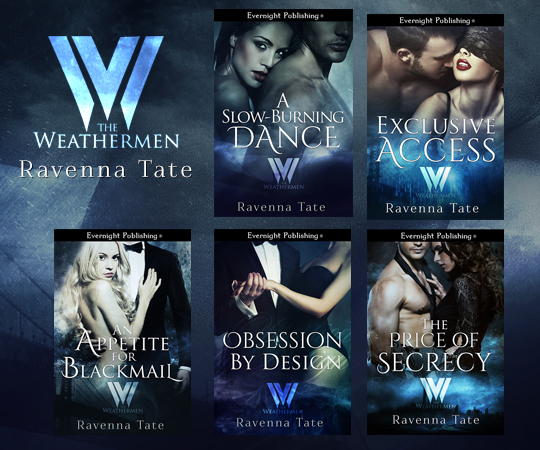