Happy Hump Day everyone! I’ve got author Erin Ashley Tanner here today, to tell us about the inspiration behind her latest release, Goddess By Chance!

Anyone who knows me is aware that I love all things Greek mythology. After I completed my first novel, Goddess of Legend, I started to wonder could there be more Demi-god Daughters out there that needed their stories told. To start with I had to decide what Greek goddess would be a good candidate to have a half mortal daughter. I’m sure who I chose will surprise many.

After that I thought about what kind of heroine I would have this time around. Since I’d created such a take charge, kick your butt heroine in the first novel in the series, I wanted to go for a much softer and more vulnerable heroine and thus Arienne was created. As for the god in this story, I wanted somebody a little rougher around the edges with more of a dark side. I’d say he’s more of an anti-hero than a hero and as a result he was a lot more interesting to write. 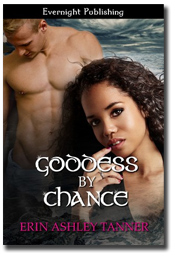 Arienne Marcos is a librarian with a secret. She has superhuman strength, a genius level IQ, and a goddess mother who is never satisfied. When Arienne lands on the radar of a god determined to use her for revenge, she has no idea what she is in for.

In time, Arienne will discover that her new lover harbors secrets of his own, secrets that could be deadly. Along the way she will find herself caught in the center of an eons old grudge between gods with a thirst for revenge.

Triton’s eyes opened in the darkness as a soft hand wrapped around his cock. He didn’t move as Arienne continued to fondle him in the dark. Her innocent fascination with the part of him he was so proud of made him bite back a chuckle. As her thumb rubbed over the head, he couldn’t help the way his breath hissed through his teeth. Her hand left him immediately.

“Arienne,” he said in a soft tone.

She remained silent. His hand moved to lie between her breasts where he could feel the frantic pace of her heart beating.

“You know you can tell me anything. Just say it.”

“I want to make love again.”

In the dark, Triton smiled. He shifted her in his arms until her head was on the pillow next to him. Even in the dark, he could see the expectant look on her face.

She kissed him then, her lips soft and eager against his, and he pulled her close, wrapping his arms around her. Arienne’s erect nipples brushed against his chest and he grew harder. Her tongue slipped inside his mouth, making him groan. The sweetness of her kisses was nearly enough to undo him. Easing Arienne onto her back as her kisses became feverish, his hand reached between her legs where the evidence of her readiness couldn’t be denied.

Nudging her legs apart, he slowly he thrust inside of her and her tight, wet channel gripped him like a vise, stroking him. His hips pumped into hers at a languid pace, enjoying the velvety softness of her. She moaned against his mouth before her tongue slipped to tango with his. Every slide into the welcoming warmth of her body made him pulse with increased desire.

Erin Ashley Tanner is a proud alumni of Florida State who is currently embarking on the journey that is nursing school. In the rare free time she has, she enjoys leisure reading in all genres and writing whatever stories come to mind. She dreams of a long life filled writing many more stories. To learn more about Erin, swing by her website, find her on Facebook, or on Twitter @erintheauthor.