Hello, and thanks so much for having me on today! Shifter Woods: Roar is the second entry in my Esposito County Shifters series and runs parallel with Book One, Shifter Woods: Howl. Roar is the story of former MMA fighter and photojournalist Gavin Leeds, who winds up throwing himself (literally) on Alpha bear shifter Mike Ivanov’s mercy after armed rednecks try to kill him in the Sandia foothills. To Mike’s surprise the gorgeous human turns out to be his heart’s mate, but Gavin isn’t interested in happily ever afters. Things quickly change, however, when Mike has to go after a pair of rogue shifters with Gavin’s help. In the middle of a snowstorm. Let it never be said that I make things too easy for my characters, muwahahaha…

The third entry in the series, Shifter Woods: Snarl, will be out in late August, and the fourth entry, Shifter Woods: Scream in October, with plans to combine all four novellas into a box set and print version in November. I also plan on doing a full-length novel set in Esposito County next year – not sure which couple is going to star in it yet, but I promise that everyone from the Shifter Woods novellas will make an appearance. 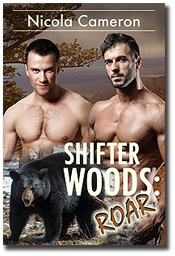 When armed lowlifes and a snowstorm in the Sandia Mountains strand photojournalist Gavin Leeds in Mike Ivanov’s cabin, the newshound gets the shock of his life. Not only is his sexy rescuer an Alpha bear shifter, but Mike also believes that Gavin is his destined heart’s mate. Some hot and dirty sex with a hunky shifter is one thing, but Gavin doesn’t believe in fated mates or happily ever afters.

Mike Ivanov has enough problems with his pack as it is; they’re not thrilled that he won’t be siring the next Alpha, and now he has to answer a challenge from one of his pack members. Having his heart’s mate show up on the same night doesn’t help. Finding out that his mate is a snarky, rebellious human with a commitment problem and an ass he wants to bite?

Nobody ever said an Alpha’s life was going to be easy. 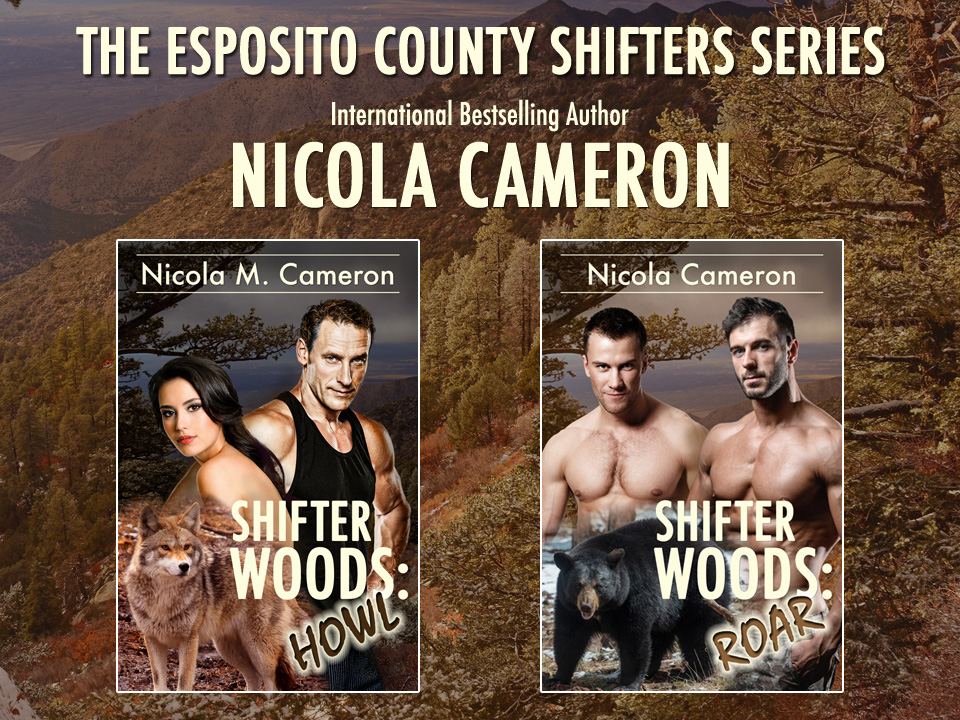 Gavin opened the jacket and eased it over Mike’s shoulders, glancing downward. He grimaced. “Wow. He really whaled on you.”

Mike looked down at the multicolored bruises now spreading across one side of his ribcage. The claw marks were crimson against them, and stung even in the increasingly humid air. “Part of being an Alpha. I have to take on all challengers. They’ll be healed by tomorrow.”

“If you say so.” Gavin finished pulling the jacket off and tossed it onto the bathroom counter. He turned back, resting the tips of his fingers on the edge of Mike’s belt. “Should I keep going?”

Mike licked his lips. Pain or no pain, he was damn tempted to pull his gorgeous human onto the floor and fuck him silly. “Yeah.”

Gavin’s irises contracted, turning into a band of moss green around a dark center. “All right, then.” He undid the belt, letting the clinking buckle dangle. The back of his hand brushed against Mike’s growing erection. “Yeah, you must be feeling better.”

Even that light touch sent electricity along Mike’s nerve endings. “You were a fighter,” he said, voice hoarse. “You know how it is. There’s nothing better after a good fight—”

“Than a good fuck, yeah.” Gavin’s hand turned over and he cupped Mike’s bulge. “You sure you’re up for it, though?”

Even through a layer of denim Gavin’s fingers felt like magic. “Did you want to have sex with me tonight?”

Gavin laughed shortly. “Well, I was hoping you’d be interested. But I didn’t expect you to have to fight a freaking bear first.”

“We all have our little challenges.” He thrust lightly into Gavin’s hand. “Keep going.”

Nicola Cameron is a married woman of a certain age who really likes writing about science fiction, fantasy, and sex. When not writing about those things, she likes to make Stuff™. And she may be rather fond of absinthe.

While possessing a healthy interest in sex since puberty, it wasn’t until 2012 that she decided to write about it. The skills picked up during her SF writing career transferred quite nicely to speculative romance. Her To Be Written work queue currently stands at around nineteen books, and her mojito-sodden Muse swans in from Bali every so often to add to the list, cackling to herself all the while.

Nicola plans to continue writing until she drops dead over her keyboard or makes enough money to buy a private island and hire Rory McCann as her personal trainer/masseur, whichever comes first.