Today I get to welcome a fellow Canadian to the blog! I’m so pleased to introduce you to Magali A. Fréchette and her Evernight Publishing debut, My Soul To Give – the first in a new dark romance series. 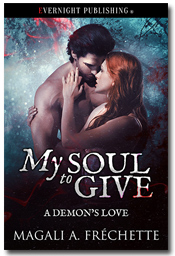 When Celina Leviet escapes the brutal home invasion that kills her husband, she’s left with a bullet in her gut and vengeance in her heart. An alluring demon, Mekaisto, offers an irresistible deal—in exchange for her soul, he’ll let her live long enough to get her revenge, but she must hunt and kill the murderers herself.

After sealing the contract, Celina digs into her husband’s past for clues about his murder, and what she uncovers makes her question everything she thought she knew about him.

His company never existed.
His family history was a lie.

And he was involved with The Lumen, a shadowy religious order whose members know too much about demons. As the life she thought she knew crumbles around her, Mekaisto’s charms become harder to resist. Forced to face a horrible truth, Celina struggles against her late husband’s betrayal and the dark seduction of the devil she knows. 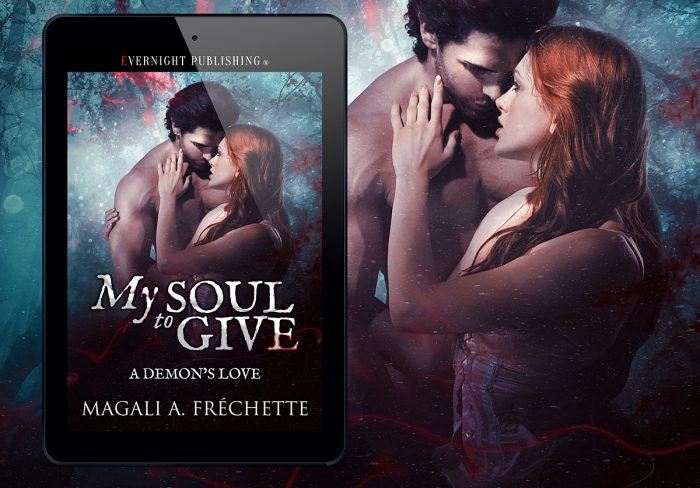 “I am a demon, Celina, and above all else, demons love the hunt.” He smirked when her eyes widened.

“So, you see having sex with someone as a hunt?”

He sighed and ran his fingers through his hair. “By your expression, I would say you still do not quite understand.”

“I take my time, stalk my prey first, count the number of breaths she takes, imagine her screams…”

She arched an eyebrow. “That’s not at all creepy.”

Kai ignored her. “I am a creature of infinite time; the world creeps by, yet an intimate moment is so fleeting, it feels as though it is gone in less than a second.” He stopped, expecting an interruption again, but she stayed silent. “The pleasure is heightened by the danger, and in the throes of passion, I could lose my control and revert to the form least likely to be found pleasurable by my … partner?” He lost himself in the images in his mind, pinning down Celina’s body, taking her in a way she would never be able to recreate with a mere mortal man. “Hunting is simple. There is always one in the crowd that stands out—rarely is it the one searching for the one-night stand—no…” Kai locked his eyes with hers and goose bumps rose on her arms and legs. “No, the one unsure of what society wants her to be, the one who is desperate to be loved and appreciated. She is the one I seek.”

“So, social outcasts are your type?”

His eyes pierced her until he could see through her mind again, to all those curious little fantasies.

He smiled. “It’s about finesse, Celina. I listen to her, and as she speaks more confidently, I brush a hand over her skin”—his hand skimmed Celina’s neck as he brushed her back—“just enough so she shivers with anticipation of what my lips would feel like in the same spot.” He delved into Celina’s mind as his words worked against her disdain for him. “Then I caress her in a way she won’t notice, but her subconscious will let her lean into, let her mind take over and her body will beg for more.”

“She’d notice if…” She followed his gaze to his hand on her knee.

“Are you certain?” He’d worked his own body into a sensual frenzy as he’d drawn her into his web.

She stared at him, her cheeks flushing. “I—”

“Eventually, I suggest a night filled with pleasure.” He couldn’t contain his smile as he moved closer. “I keep touching her in small ways—maintaining physical contact at all times.” His hand inched up her side, until he tucked a loose strand of hair behind her ear. She sucked in a breath and he cupped her cheek.

He sat close to her and her scent calmed and excited him at the same time.

“Sex is fleeting.” He took her chin and drew her close. “But intimacy is endless, a continuous moment of gentle touches”—his hand dropped back to her knee, and then made its way up her thigh until she let out a small gasp—“personal boundaries broken, and pleasures that go beyond sex.”

She sat as if frozen. “It’s still a one-night stand.”

“Mine last longer—and you reveal not only your body.” His hand moved to the middle of her chest. “When you are intimate with a demon, you reveal your soul. You make yourself vulnerable and open.”

“Considering you’ll have my soul sometime soon, I’m not giving you a free sample.” She drew away from him and stood. “I won’t be your prey tonight.”

Another surge of heat rushed through him, but he pushed it down with a long, deep breath. “You would set me loose on another human?”

She glared at him. “I wasn’t aware I had a choice about what you do outside of our deal. This would be on you, not me.”

“You think you control what I do within our deal?”

She rubbed her arms when he stood. “Not when you say it like that.”

“Celina…” He stopped in front of her and leaned into her personal space, drawing a lungful of a scent he would only ever associate with her.

He wrapped his arms around her, swallowing the shiver that shook her body. “What are you—?”

“Let’s play, Celina. I can assure you, you will not regret a night in my arms.”

I want you… Against all my instincts, I need you close.

Celina pushed him as hard as she could, and he withdrew as disappointment withered his gaze.

You are trembling again, my dove… Is it because you are scared you will give in? How far can I push you until you bend?

She glared at him, but Kai’s smile widened. He could feel, even smell, the pulsing between her legs begging him to take her.

“Isn’t it enough you’re getting my life and my soul? Now you need my body, too?” She pushed against him again, but he only held tighter, unable to let her go. “Why are you doing this? I just lost my husband, found out things that break my heart. I can’t sit and flirt with you.”

“I am offering you the chance to forget.”

“No!” Her hands clenched to fists as she shoved even harder against his chest. “No! You want to take everything I have left.”

He grabbed her wrists, pushed her back on the sofa, and pinned her down, his body hovering over her. “What is your life without your body?” He tilted his head and flicked his tongue across his lips. “You never asked what selling your life and soul meant specifically. Allow me to enlighten you now.” He moved until his face loomed only an inch or so from her face and her breath caught. He let go of her wrists, but his gaze pinned her to the spot.

“What?” Her voice ached just above a whisper.

Her face flushed and her lips trembled. “I never agreed to that!”

“You agreed to living. The details did not matter to you.”

His smile widened. “Even if you had all the time in the world, it would not have made a difference. Humans never read the fine print.” 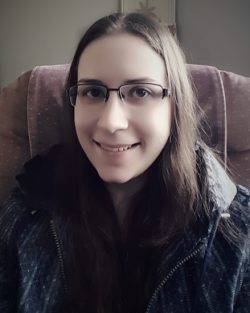 Magali A. Fréchette writes the darker side of stories. Paranormals, Dark Fantasies, and Mysteries/Thrillers, but always with romance – she’s an extremist and loves both dark and cute things. Her stories will rip your heart out along the way, but she’ll make sure you don’t throw the book against a wall when you finish it! All her stories are either set in Canada, or in alternate worlds (makes sense since she’s Canadian, right?)

She has two main hobbies: writing and creating book covers. She’s also a gamer (Diablo, Zelda, Final Fantasy), enjoys listening to music (and always singing along to Disney), has a passion for Japanese and Scottish culture, and adores reading. She loves anime/manga, Japanese Dramas and considers herself a proud fan of many different TV shows including Buffy, Supernatural, Doctor Who, Sherlock, Merlin, Game of Thrones, Outlander, etc.

Magali wrote her first story when she was 12 years old (and she’ll never talk about that story lol), but started seriously writing three years later. Since then, she always writes. It’s always been a dream to be a published author, and she can happily say she’s reached that goal― she plans on continuing writing and publishing for the rest of her days.