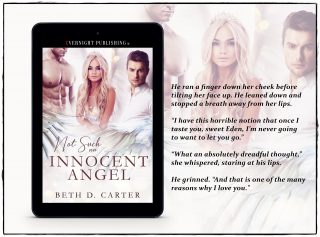 Q & A: Beth D. Carter’s Not Such An Innocent Angel

It’s been a minute, hasn’t it? Hope you’re all staying safe and well, and have plenty of books to keep you company. Speaking of which, I’ve got a brand new one to tell you about. Author Beth D. Carter has a sizzling new title, Not Such An Innocent Angel, and she’s been gracious enough to answer a few questions about it!

Is your book part of a series?

Yes, and no. It’s set in the same world as my book “As Midnight Loves the Moon”, but it’s not a direct sequel. That book featured a Fae cop, a Vampire, and a dying human girl they love. This book features a Vampire, a dying human who’s been Wraith touched, and an Angel. The premise is that there is a hospital devoted to the human companions of supernatural creatures, and our Angel (Eden) works there.

What was the hardest (or easiest) scene to write?

The easiest scene was the beginning. In fact, I had that written years ago, I just didn’t know back then what to do with it. So it sat in my “To Be Written” folder for a long time. After I wrote “As Midnight Loves the Moon”, I realized I knew where that first chapter belonged, so I started thinking about the rest of the story.

What was your process for coming up with the title and character names?

I went through a multitude of names, actually. The only one that stayed consistent was Gideon’s name. It’s an old name and I thought a stately name for a vampire. But Jacob’s name was originally going to be Jaxton, until I realized that EVERY author had started naming their hero that. (I blame it on Charlie Hunnam!). But then I also came to realize that name didn’t fit with who the character was, so I began thinking of an old fashioned yet also cool modern name and settled on Jacob. Eden’s name…well, that’s pretty obvious. She’s an angel!

The title is a little homage to an old Victoria Beckham song titled, “Not Such an Innocent Girl”. I kinda went through a VB fangirl period and the song was one of her solos. It’s actually a cool pop song if you want to check it out.

Tell us something about the novel that doesn’t appear on the blurb or the excerpt.

As Eden headed to the exit of Dove Hollow, she saw Krause mopping the floor down one hallway. The hallway she had with him a few days ago resurfaced in her memory so she changed direction and headed toward him. As she approached, Krause paused and smiled at her, revealing his very sharp teeth.

He bobbed his head. “Miss Eden.”

“Remember when you mentioned that several seraphs had gone missing? I was wondering if you knew anything more.”

“Not much is a secretive among the demons,” he said. “Even us goblins are included in their confidence.”

“Then…have you heard what happened to them?”

He leaned on his mop. “There’s only one reason why a demon comes looking for a goblin, Miss Eden.”

He flashed his pointy teeth.

Eden thought she might be sick. “You eat them?”

Eden took a step back, disgust and horror mingling with shock. “Did you…”

“Oh no!” he said quickly. “No, no, no. To do something like that would jeopardize my job here at Dove Hollow.”

*** The reason I changed this was because I use a goblin as Gideon’s manservant/butler and both characters were vastly different. I wanted to keep the other so I changed Krause.

What is your favorite line?

I love putting one-liners in my stories and I try to find that one snarky character I can do that with. In this story, Gideon is my snark. There are some great lines from this but I think my favorite is:

Gideon raised an eyebrow. “More so now because between the two of us, we can buy the United States out of debt and rename it Gideonville.”

What’s next for you?

I have a Christmas story coming out! My very first one. It’s titled “The Holiday Grouch”, and it’s a play on “How the Grinch Stole Christmas”. I was going to title it “How the Grinch Stole my Heart”, but the word Grinch is copyrighted. Oh well. There’s still a lot of non-direct references, like the heroine’s last name is Whobrey. I had fun trying to write a grouchy man redeemed through the magic of Christmas and I hope everyone enjoys it! Eden works as a nurse in Dove Hollow Hospital, taking care of the human companions for the supernatural creatures of the Shade. When a human male is brought in, wraith touched, his pleas to save him tug at her heartstrings. In an effort to save his life, she calls in a favor from the powerful vampire, Gideon Marks.

At first Gideon is reluctant to turn the man Eden is fascinated with, but when he discovers it’s the businessman Jacob St. Cross, he quickly changes his mind. Now, Jacob has to navigate a world he knew nothing about, as a creature he thought only myth.

The mystery of why Jacob was targeted for vengeance leads them down a dangerous path and brings Eden into the line of fire of a desperate man…a man willing to do anything to find an angel that’ll save his life.

When he finally stood completely naked, he and Gideon assessed each other for a long moment. Jacob prided himself on being fit for someone in his forties. His job induced a lot of stress and he tried hard to balance that out with strength training and cardio at the gym. Gideon Marks had a very defined, chiseled body. His surprisingly well-hung cock was already hard, waiting for attention.

It stirred something in him, although Jacob didn’t know if it was the situation or some type of latent sexual interest he didn’t know he possessed.

Gideon walked over to him and he didn’t move, not sure what to do. The vampire circled around and stepped close, bringing his body flush against him. Excitement stirred in Jacob’s belly. His own cock hardened.

Gideon’s hands ran down his sides, to his hips, and fit his cock against Jacob’s ass. He may not have known what to anticipate, but he found himself enjoying the contact. The air shifted around them. A pleasing, somewhat spicy scent filled his nostrils. It made his cock pulse and fluid to leak from the tip. Needing to have some contact, he took hold of his shaft and stroked. Gideon seemed to match his movement, nestling in Jacob’s crack and sliding up and down. Heat gathered between them as sweat beaded on their skin.

Jacob felt two pressure points on his neck, but instead of being repulsed, he actually tilted his head to give Gideon more access. Whatever sexual spell the vampire had cast was incredible. Never would he have imagined grinding against a man would be such a turn-on, although he instinctively knew it wasn’t just any man. It was pure Gideon, with his otherworldly power to seduce.

He wanted to know what it felt like to be bitten.