Well Monday certainly skipped on out of here in a hurry, didn’t it? So happy Tuesday everyone! Hope you had a fantastic weekend and are ready to take on the week with gusto. I’ve got a hot new Naughty Fairy Tale from T. Lee Garland to tell you about today, so check out Rapunzel’s Romp… 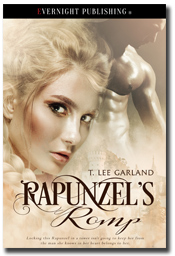 Rae Ann Compton has been called Rapunzel for the majority of her life. Her floor sweeping honey-blonde hair though had a purpose; she grows it in memory of her mother who died from cancer when she was a small girl. She now owns and operates Rapunzel’s, a high-end hair salon in Hollywood. Her life is orderly and business driven, until the day Alex Princeton, her secret crush walks in.

Alex is the quarterback for the Hollywood Hounds, and has been dubbed the Prince of Sunday, by the press. He’s sexy and usually only dates super models. Rae is no super model, but he makes her an offer she can’t refuse and soon she is flying first class to a castle in Germany, for the wedding of the century.

Locking this Rapunzel in a tower isn’t going to keep her from the man she knows in her heart belongs to her.

“Well this is certainly awkward,” Lara says, holding her dress up in front of her nakedness in some kind of false act of modesty when the door swings open and I step in and come to a stop at the sight before me, Lara and Alex naked and looking guilty as hell.

“Rae.” Alex yanks on his pants, and starts to move toward me. “It’s not what it looks like…” I hold my hand out to halt him. My eyes are on Lara, and I move slowly toward her.

“Awkward? How so, Lara?” I pause right in front of her, and she smiles a smile that to me resembles the evil grin of a jack-o’-lantern. It turns her face from something that would have been pretty to an ugly sneer. It is not a good look on the wealthy socialite.

“I don’t want to hurt you, dear, sweet Rae, but Alex and I just made love and it was quite spectacular.”

Behind me, Alex unleashes a string of curse words that almost makes me blush, but I’ve gone too far to stop now.

“Shut up, Alex,” I say without even turning to look at him. I’ll deal with him later. I snort and move closer to Lara. “You’re a liar. You and Alex didn’t just have sex. Do you want to know how I know that with such confidence?” She shrugs nonchalantly, and I move on. “Because, Lara I’ve actually had sex with Alex, several times actually.”

Lara’s eyes narrow and she frowns at me. Now the evil grin is knocked from her lips.

“Sex with Alex is messy, Lara. It leaves you sweaty, shaky, breathless, but oh so very satisfied. I see none of those things when I look at you. Your hair is still perfectly smooth. Your makeup is still intact, and you’re still able to stand on your own two feet.”

Lara snatches her dress over her head and pushes past me.

“Bitch,” she snarls, moving to leave.

But I wasn’t finished with her yet. “Lara, I don’t doubt that you tried to have sex with Alex, but it didn’t happen. But what did happen is you locked me in the tower and thought I would stay put, so you could come here and put your sleazy moves on Alex.”

Lara whirls around at the door. “Locked in a tower? Isn’t that where you belong, Rapunzel?”

“Shut up, Lara, and get out.” Alex slams the door on a shocked Lara and turns to look at me. I’m suddenly not feeling so brave. I try not to fidget, but I can’t help but notice that he’s bare-chested, his abdominal and pec muscles on glorious display. The hastily pulled on pants are zipped, but not buttoned and barely hang from his hips. I’m having trouble meeting his gaze. Hell, I’m having trouble breathing. “I’m messy, am I?” He begins to stalk me. Moving slowly my way, he’s smooth and precise like a panther on the hunt. “Sweaty?”

I shrug and take a step back and almost trip over my long dress and heels.

“Shaky?” He keeps coming, and I keep backing up. My knees feel weak, and I reach behind me for the wall for support.

My back finally hits the wall. There is nowhere else to go. Alex stands in front of me now, and I feel his heat. I smell his manliness, and his steamy breath washes over me like the first warm day of spring.

His lips hover over mine. “Don’t worry, Sunshine, I’m going to make your satisfaction my top priority.” His lips touch mine with a hunger that leaves us both surprised. He pulls down the strap of my one shouldered gown, and my breasts pop up like a tart from a toaster and he growls.

Suddenly we can’t get enough of each other. Our hands are everywhere. I unzip his pants, and they drop to the floor at his feet. At the same time he is pulling up my long skirt and ripping off the thin lacy thong that I wore. He plunges in me, and I cry out, welcoming the pain. He has me skewered against the wall and he pulls up my legs and I wrap them around his waist and I lock my ankles.

I gasp with shock. Alex, who never loses control, and never has unprotected sex, has just forgotten his condom.

T Lee Garland lives in Clarksville, Tennessee. One of her first memories as a child is her Uncle Roy giving her a Little Golden book for her Birthday. That’s all it took, she was hooked on reading. She read her first romance book at seventeen and never looked back. She loves a bad boy who doesn’t know how good he really is. As a matter of fact she married one! She loves writing strong female characters who know what they want and aren’t afraid to go after it.

She shares her home with about one hundred Barbies, countless books and movies, a rescued beagle named Samwise Gamgee (Sammie for short) and a plump, elderly cat named Coco. She is most proud of her two sons and the beautiful, talented ladies they married.

And in case you were wondering that Little Golden book is still one of her most priceless treasures…forty-nine years later.