Hey kids, it’s hump day once again! And I can’t think of a better way to celebrate this marvellously sunny day than with a new Naughty Fairy Tale from Evernight’s Rose Wulf, a paranormal romance titled Beauty’s Beast…

Hi and thanks for having me on your blog today!

I’m excited to talk about my latest release, Beauty’s Beast! This one is part of Evernight Publishing’s Naught Fairy Tales line and is, you guessed it, a re-imagining of Beauty & the Beast. My version comes complete with a mouth-watering incubus trapped in a castle! 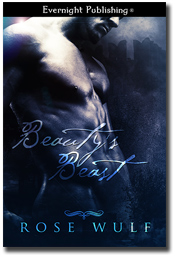 He was an incubus. She a human.
He was bound to the castle. She was only visiting.
It should never have worked….

Aurora’s life took a turn for the exciting when she won a four-night trip to Castle Finnegan. A castle inhabited by a sexy stranger with smoldering bedroom eyes and a sinful touch. It was easy getting swept up in his arms, harder to accept that she had to let go.

Daemyn didn’t get attached. There was no point. But he couldn’t keep Aurora out of his heart any easier than he could keep her from his bed. And that presented a problem, because if she ever found out he wasn’t human she would run. Not that it mattered, because he was cursed to the castle for eternity… unless he could get Aurora to love him for what he was.

Aurora rolled onto her back, blinking up at the shifting shadows on her tall ceiling. She’d left her bedroom curtains open so that her room might fill with moonlight, and in that, she was not disappointed. If she were being honest with herself, actually, she was only disappointed with one thing so far—not knowing Mr. Sexy’s name. But she swore she could still feel his lips on her neck. His tongue slipping out to moisten the skin. The graze of his teeth when he sucked. The heat of his hands through the fabric of her robe.

“Be ready for me tomorrow.”

Even now that bold, promising declaration pulsed through her. She should have been scandalized. Horrified. Furious. Most rational women would surely have stormed right up to Mr. Finnegan’s room and demanded action be taken. But she wanted no such thing. No, all Aurora really wanted was to fall into Mr. Sexy’s arms and find out if he made love as well as his touch said he would.

She was uncomfortable. Her core ached with need and she knew if she checked, she’d find herself wet. And there was really only one thing she could do about it … if she was brave enough to do such a thing under someone else’s roof. With her best friend across the hall. Ordinarily she might not have been, but tonight the desire was strong. It burned hot through her veins just thinking about the man who’d started it.

Besides, who’ll know? There was no harm in it.

Pulling her lips between her teeth, Aurora kicked down the comforter and slipped her hand beneath the waistline of her pajama shorts. Sure enough, she found herself slick and sensitive. So she closed her eyes, slid her fingers over her folds, and pulled up a mental image of Mr. Sexy. Tall, broad, with rippling muscles and a deep, sensual voice. Dark brown eyes and long, dark hair.

“Breathe, beautiful,” he’d said when he touched her. She moaned and slid a finger into her center. Good God, his voice … even now it rumbled through her like a promising caress.

Someone knocked at her door, startling her so much she accidentally thrust her finger harder into her body. She couldn’t have stopped the resulting moan if she tried, and she prayed that whoever was on the other side of the wooden door hadn’t heard it. Before she could gather herself enough to straighten her clothes and stand, however, the door swung open and she froze.