Kidnapping, abduction, and sexual slavery are just a few of the titillating taboo themes in this hand-picked anthology. 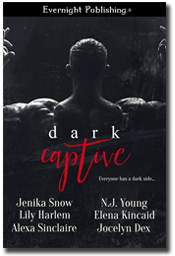 Take Me by Jenika Snow
Sinful by Lily Harlem
One Last Job by Alexa Sinclaire
Captive Artist by N.J. Young
The Shadow by Elena Kincaid
Godsend by Jocelyn Dex

Spotlight on Sinful by Lily Harlem

London is aflame with riots. Confusion and danger lurk around every corner. For Cheryl, caught alone and terrified in a dark alley, she fears she’s about to meet her maker.

Luckily the safe sanctuary of a small church, nestled between the deserted shops and houses, affords her protection. And within these sacred walls she finds Father Steve—a man whose decision to be celibate, marry his faith, seems to her an awful waste to the females of the world.

But all is not as it seems and as her hot and holy new friend reveals his layers and confesses his sins, the temperature in the church heats up more than the flames raging across the city.

Safety, however, is an illusion, and the pair must fight to survive. In doing so will fate draw them together? Have the heavens mapped out their destiny? And was Father Steve telling the truth about his virginity?

“Don’t be shocked. Tonight is unusual.” He reached out and took a lock of my hair between his fingers. He rubbed it, spreading out the blonde strands. “I think God has thrown us together. To take care of one another.”

“Yeah.” He looked up and smiled.

It was a filthy, dirty smile. The sort I’d seen on boyfriends when we’d been drinking, flirting, having fun and about to start satisfying some seriously carnal urges. “Father,” I whispered.

“Sitting with a member of my flock who appears very scared.” He shifted on the narrow pew.

“Not if you have God in your heart.”

“I think you’re probably good at other things.”

“Yes.” He leaned closer, his lips only a whisper from mine.

Damn the instinct to kiss him was almost overwhelming. Sure he was a stranger, but he was a good man, a man of morals and beliefs.

Which was exactly why I couldn’t kiss him.

But what if I died tonight? What if this was it? Surely I should have one last moment of passion. I loved sex, and it was one of my favorite things to do.

“What do you want to ask me?” he asked, his breath washing over my mouth.

One thing. There were so many. He was the most unusual priest I’d ever met. Not that I’d met many. Not only was he handsome in a rugged kind of way, he also oozed sex appeal. It seemed to roll off him in waves. Had we been in a club I’d have gone for him, and had a one-night stand just to see how a guy like him did it.

“You don’t have anything you want to ask me?”

What was really in the bag? Why was he here at night alone? Where did he live exactly? Did he look at all women the way he was looking at me—as if he were undressing them with his eyes?

“Have you ever had sex?” I blurted. It was the answer I really wanted after all.

“Oh.” Damn it. If I’d been turned on before, now I was in white-hot ready-to-go mode. The things I could teach him given the chance. What I could do with his naive, inexperienced, gorgeous body. The delights of the flesh I could introduce him to.

“But I bet you’ve had lots of propositions,” I said, wondering if I should sit on my hands to stop myself reaching out for him.

“Yes. But I’ve always turned them down.” His voice was low now, husky too. “Do you want to know why?”

He glanced at Jesus. “I made my promises to the Lord.”

He shook his head and glanced at his lap.

“Lately what? Tell me.” Had he been questioning his faith? Was that it? Was that why he was looking at me as though he had only one thing on his mind—and it wasn’t the riot outside.

“Lately my faith has been tested. The evil in the world, including here. It’s hard to stay focused.”

“I’m sure.” It was my turn to take his hand. I gave it a squeeze and looked at the way the hairs fanned over the back and disappeared into the black sleeve. I ran my fingers over the letters on his knuckles. Love was clearly a moto he lived by. “And what’s the other reason?”

“I told you I’d had propositions.”

“And always turned them down.”

“Because you’d made promises and you love God.” I paused. “Very noble. Very commendable.”

“No one like you, no one as sexy as you, has ever propositioned me.”