Welcome to a whole new month! After those two smokin’ anthology profiles, I thought I’d keep the dark romance theme going with another hot new Evernight title. Today I’ve got a sneak peek at Maia Dylan’s new novella, Abducted for Life, and a Q & A with Maia herself.

Q: Where did your inspiration come from for this novella?

A:  Evernight asked for submissions for their Dark Anthology, and I submitted this book for it.  I found out I am not so good at writing the darkness into my characters, there is too much humor and love for it to be dark, but I loved Liam an Scott and am grateful that their story has been told.

Q:  Sometimes things happen when you are writing a series that wasn’t expected at all.  Have you had this happen to you?

A:  Heaps!  I am not a planner.  I am a write-by-the-set-of-your-panties kinda girl.  There have been moments where I will finish up a scene and be like WTF?  I did not see that coming!  This whole series started with an image I found that I simply couldn’t let go of.

Q: Why do you always include a danger element to your books?

A: I write what I love to read. I love books that take you on a journey, but where the characters face a challenge that adds an element of urgency to them and to the book.  As a reader, there is nothing I like more than getting that goose bump, hair rising on the back of my neck feeling as I join the characters within the book I am reading on the journey to solve their mystery.  I want to give that to my readers.

Q: What are you working on at the moment?

A: I am about to sub my second book in my Sniper Team Bravo series, and have started a new stand alone for a menage box set coming later in the year. I have decided that I have too many stories and need to try and grow another pair of hands to type with!

Q: Do you have anything to say to your current readers or to those that haven’t yet read you work?

A: If you have read any of my books, thank you so very much! It blows my mind that someone has actually read something that I wrote, but gosh I hope you enjoyed it!  Did you?  Please let me know, I find I suffer from a slight case of needy-nelly with my writing.  If you haven’t read my book, but you love erotic romance stories between strong men and an independent woman, where the path to their happily ever after can be a bumpy one, but there is always a happily ever after, and their love and laugher is real on every page, then you’ll find my books right up your alley! 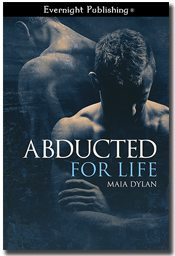 He was just abducted, and he’s never felt freer…

Liam ‘Lee’ Hallion had an assignment. Kill the one person in the world he’d cared about since losing his parents. When he discovers that everything in his life was not what he thought it was, he decides to make a stand and take the head of the snake who betrayed him. The first step of his plan was to abduct the man’s son.

Scott Majors had no idea why he’d been abducted, but he was going to try everything he could to escape. When he discovers the true identity of the man who abducted him, his urge to escape quickly becomes a desperate desire to be kept.

Can Liam and Scott survive the evil hell bent on ending them both, or will this abduction end in blood?

“You’re bleeding.” The man sounded pissed off as if the fact that Scott was bleeding was somehow his own fault and a complete inconvenience. “Damn it, let me see them.”

Scott scrambled back on the bed, pushing into the wall. “Get the hell away from me!”

The man sighed and moved toward the wall. Light exploded within the room, and Scott lifted his hand to shield his eyes. “You’re really not in any position to make demands, Scott. Not with me.”

Scott froze against the wall, blinking rapidly to get his eyes accustomed to the light. “How do you know my name? Who are you and what the hell do you want with me?”

“There’s not a whole hell of a lot I don’t know about you, Scott,” the man answered dryly.

Scott dropped his hand and looked up at his captor. In any other circumstance, the man before him would have captured his attention. He was exactly the sort of man that Scott liked and fantasized about. He was tall, at least six foot four, and built like he knew his way around a gym and worked his way around one every chance he got. He had wavy black hair, short on the sides but longer on top, a square jaw with a day’s stubble, and blue eyes that had Scott’s heart stuttering within his chest. Did he know those eyes? Shaking his head and blaming it on the knock to his head, Scott put that thought aside and concentrated on what the man was saying.

“I know you are Scott Theodore Majors, you’re an ER nurse at St Luke’s, and you’ve just finished your shifts for the week. You’re not rostered on for the next four days.”

Scott started to tremble. From his medical training, he knew that shock was starting to set in.

Scott’s mind whirled. “I have a boyfriend, and he’s expecting me home. He would have called the police by now.” The man’s eyes narrowed, and Scott thought he might have just made a critical error.

“Did I not just finish telling you that there isn’t a lot I don’t know about you, Scott?” He whirled away and walked to a door Scott hadn’t noticed before. He opened it and switched the light on. “We are currently in the basement of my house, on my property in the middle of nowhere. My nearest neighbors are more than fifteen miles away, and no one comes to visit. There are no windows in this room, or in the bathroom through that door. The only way out is the way we just came. If you simply stay put and do what I tell you to do, then you will be comfortable. However, if you try to escape, I will move up my schedule and that will not go well for you.”

Scott’s stomach dropped. “Why?” he asked hoarsely, still none the wiser.

The man sighed, and sadness filled his eyes. “Sometimes, it’s the children that must pay for the sins of the father. That’s simply the way life goes.”