Say hello to my guest, Doris O’Connor, who’s here to tell us about her hot new release with Evernight Publishing: Finally His.

I had such fun writing Richard and Jolie’s story, and I hope readers will love these two as much as I do. 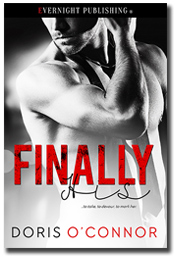 A nice hot, forbidden fling with her boss…what can possibly go wrong?

Jolie Pierson has lusted after her hot as hades boss forever, so when he finally takes notice of her, she can’t help but melt at his dominance. Besides, it would be rude to not give him a present on his birthday.

Richard Tomlin never dates the women at his office. However, when he realizes the sinfully curvy red head he’s been struggling to keep his hands off for ages is submissive…the gloves are off. This woman makes him forget all the rules and brings out his primitive instincts—to take, to devour, to mark her as his until everyone knows she belongs to him.

Jolie was ready to accept just one night of hot kinky sex, but when Richard pulls the boss card the very next morning, everything changes—she’s finally his. 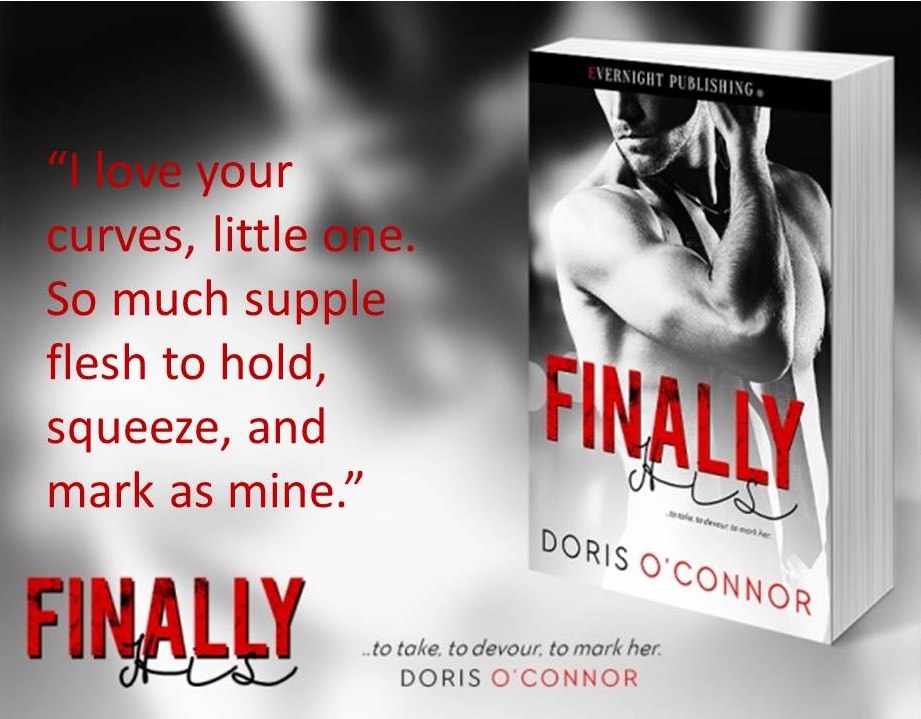 “I’m going to unlock the door and go into the kitchen to grab some things that I need. While I do that, I want you to make your way upstairs and wait for me in my bedroom. First door on your left when you get to the landing. Present for me in the middle of the room. Do not take anything off.”

He surprised her by that missive, he could tell because she briefly looked up him.

“I want to be the one to undress you, little one.”

“Oh.” Her breathy whisper of a reply made him groan, and he yanked the door open to get out of his car. The cool night air hit his face, and Richard closed his eyes and took several deep breaths to get in the right head space for this, and to most importantly get his raging libido under control. Otherwise he would pounce on her like a madman the minute he got her through that front door. While a quick hard fuck against his front door held a certain appeal, he wanted to take his time with her.

To show her how good they could be together and to leave her utterly scrambled and begging him to come. Only then would he seek his own release.

Mind made up he strode to the door, the click clack of her heels on the stones of his driveway a reassuring affirmation that she was following him. Having opened the door, and disabled the alarm, he switched on the lights and gestured up the stairs.

“Up you go, nice and slow and swing those hips for me as you climb the stairs.”

Jolie dropped her gaze to the floor and proceeded to take the steps one at a time.

“Slower than that, girl. Pull your skirt higher, so that I can see the pussy I will be claiming soon.”

Jolie complied with trembling hands, and his throat went dry as her gorgeous, ample thighs came into view. Skin liberally sprinkled with freckles called him to taste, to touch, and he stepped up after her halting her slow movement upstairs.

“Bend over and get on your knees. Spread your thighs wide for me.” It was sweet torture to see her comply, and when her satin and lace covered cunt came into view, Richard stroked his heavy erection through his trousers.

The pink crotch of her pretty, lacy knickers was much darker than the surrounding fabric, and he murmured his approval when she slid the dress further up her hips to pool around her waist. Putting his hands on the indent on her waist, he skimmed them lower, over the flare of her hips, until he reached the juncture of her thighs.

“I love your curves, little one. So much supple flesh to hold, squeeze, and mark as mine.”

Jolie whimpered her need, when he inhaled against her wet crotch, and nudged the hard little bundle at the top of her slit through the fabric with his nose.

“Oh, please.” Her breathless plea made him repeat that move time and time again, until her thighs trembled, and she pushed back against him.

“So responsive and wet for your Sir. Tell, me, my sweet, I could fuck you right here on the stairs, couldn’t I?”

She moaned her disappointment when he withdrew, and Richard chuckled into the soft skin of her inner thigh. He licked a path up to one fleshy ass cheek, only half covered by the satin of her underwear, and bit down hard.

A cock hardening groan came from his girl when he licked that sting away, and his dick jerked in his trousers, seeing the half-moon bite left behind on her fair skin. The scent of her sweet musk increased tenfold, and it was beyond satisfying to realize that this was as big a turn-on for her as it was for him.

He retraced the wet path his tongue had left behind, and then licked up her other butt cheek. Her whole body jerked when he bit down on that side too, and then grasped the underwear and bunched it up until it dug into her slit. Her puffy lips, separated by the twisted line of material, were the biggest turn-on yet, and Jolie groaned when he rubbed the fabric back and forth.

Richard slapped one ass cheek and stepped up the movement between her thighs. It was beyond satisfying to see the flesh wobble and redden under his hands, so he did it again, until his girl was a panting, quivering mess in front of him. Her inner thighs were wet with her arousal, and she clamped her legs around his head, when he licked that sweet musk away. One sharp twist and flick of his wrist meant the delicate fabric of her knickers gave way, and Jolie gasped, and relaxed her viselike grip on his head.

Richard smacked her ass one last time and ran his fingers through her wet puffy labia, which caused her to shudder anew. Her pussy hole clenched in rhythmic moves, telling him how close she was to release, one he had no wish to give her yet. Every clench expelled more of her juices, and he groaned under his breath when he withdrew his fingers and licked them clean.

Sweet, with a slightly salty taste, his girl tasted divine. He grinned at her when he caught her watching him from under hooded lids. With her body shivering and covered in the fine sheen of arousal, her dress bunched around her waist, and the mass of her red hair spread over his stairs, she looked good enough to eat. A woman on the edge. It wouldn’t take much for her to go over, but he also instinctively knew that she wouldn’t allow herself to do without his say-so, as confirmed by her next breathy words. 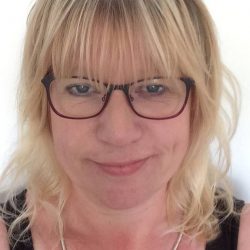