Thank you so much for offering to host me while I show of my new Romance on the Go™ story, The Contract.

I really enjoy writing RotG and getting a full story into such a short length. I love reading them as well. They’re perfect for a soak in the bath with a glass of wine, and good music. Though if you’re reading the Contract it maybe ought to be a mojito and Bob Marley, or Typically Tropical singing ‘Oh I’m going to Barbados’. (Yes, okay you might need to be really old to remember that track.) Oh and sitting on the beach or by a pool in the sunshine.

What do you think? 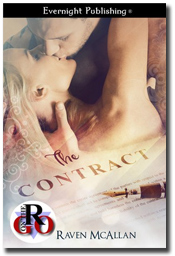 Walking out of her job was the best thing Nikki Plummer ever did. What she didn’t expect however, was to be tracked down by some hot bod, claiming she owed him.

Ruari Cameron has come to collect what he has paid for, but one look at Nikki, and there’s only one thing he wants. Her in every facet of his life.

Of course convincing Nikki of this might take some doing…but he’s more than ready to rise to the occasion.

Will they find their happy ever after under the Barbados sun?

Hell’s bells, I hope he’s not going to choke to death.  Nikki stood up and thumped Ruari on the back until his choking slowed and stopped. His eyes were streaming, his chinos covered with best Jamaican brew, and he looked a mess. Her heart missed a beat and then raced. A gorgeous mess.

Oh glory, no. I do not want a complication like him in my life. No, no and NO. Damned if her heart ignored her and red hot, ‘oh my I wonder what if’, heat filled her. She ignored it as best she could. After all, hadn’t he come to demand something of her and she had no idea what?

By the time Ruari’s chest—a rather magnificent chest she judged even though it was covered in blue striped linen—stopped heaving, Nikki had her libido almost under control. Almost. She still had to admit he was a sight for sore eyes. And for an underused…she broke that train of thought off abruptly. She was not going to think of her lack of a sex life.

“I think maybe I’d best feed you. Food for the tummy not the soul.” Nikki went into the kitchen, dampened a clean tea-towel and took it out to Ruari. “I’d say take them off and I’ll shove them in a washer, but you’ll need to wear a sheet or a towel if I do. I don’t have any men’s togs around.”

“A sheet will do, I’m burning my bits off here.” He dribbled the cool water from the tea-towel over his groin and sighed. “Better, much better.”

She hadn’t thought of that. “Then the bathroom is the third on the left. There’s plenty of towels and I’ll find a sheet.”

Ruari disappeared at a fast waddle. His uneven gait, she suspected, had something to do with his desire to keep hot coffee away from tender skin. Nikki followed more slowly. She wasn’t sure if her reawakened sex drive could cope with Ruari in a sheet.

As she rummaged through the airing cupboard something caught her eyes. Navy…shorts… She remembered with a heartfelt sigh, just what the cotton garment was.

Shorts. Men’s shorts that Rhonda used to sleep in, and had washed a few days earlier. Obviously they’d got mixed up with the sheets and pillowcases and been forgotten. But would they be big enough? She held them up, doubtfully. Ah well at least he had a choice. 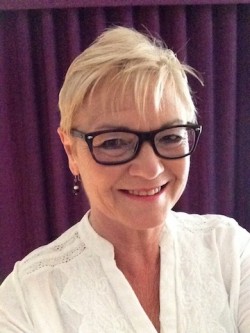 She is used to sharing her life with the occasional deer, red squirrel, and lost tourist, to say nothing of the scourge of Scotland—the midge. As once she is writing she is oblivious to everything else, her lovely long-suffering husband is learning to love the dust bunnies, work the Aga, and be on stand-by with a glass of wine.