It’s already June! I must have blinked because I feel like May didn’t even happen. In any event, I’ve got the lovely S.J. Maylee with her brand new release, Taking Over. Not only is this the third in her Love Projects series, but it’s her eighth release with Evernight Publishing! 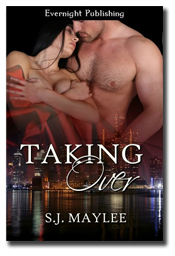 Gina’s life was perfect, until the day she realized the man she loved didn’t love her back. Her charming life turned upside down as tragedy and cruelty struck her down. She learned to protect her family from those who could cause them pain, but she inadvertently ensured the perfect life would be forever out of her reach.

Marcus has hid his love for Gina for years. His assumptions about her have allowed him to be harsh, but underneath all the anger is a man deeply in love. The tough realities of her life put them in position to see themselves in a whole new light. The second chance is right there and it could take them over the edge into the love they’ve always wanted.

This had to be a new record. In less than a minute, he had her loathing herself. It didn’t matter he was working on incorrect data. “Hope not to see you again.” She waved as she turned to go.

His hand came down on her shoulder and pulled her around. “When a Master tells you to wait, you do as you’re told. Our personal history doesn’t erase protocol. Is that clear?”

“Yes, Sir.” Her chest rubbed against his. From under her lashes, she looked up into his light blue eyes and, for a second, wished she could forget why she hated him.

“I’m sorry.” He stepped back and let his hand fall. “You came to this area because you needed something from the benches. I’m the only one free right now.” He raised his hand and brushed away the hair hanging in front of her eyes. “I can give you what you need.”

Once again, Marcus showed himself as the good guy. She didn’t like him because he had a tendency to call her out on her mistakes and she was certain he thought her supposed latest was a doozy, since it ended her marriage.

“I can see that it’s not.” He took a step forward. “We can push past our history and live in this moment.” He grabbed her hand. “Let me help.”

Warmth gathered in her core. She’d seen this side of him, but they’d never scened together. She tilted her head to the side and examined him. The first time she gazed into his blue eyes, she knew he’d cause her problems. He could see the truth through all the mess, not that he ever tried to understand her. She didn’t want to know what he’d see if he ever took a closer look at her. Fear ticked up her spine. She had a feeling that he alone would be her undoing.

Desperate to let go, she knew the sting of a paddle was what she needed, but sometimes it was hard to separate feelings discovered at the spanking bench. She laughed out loud. Since there was no way she’d start to care about Marcus now, she decided to take him up on his offer. After all, she was determined to reach the kind of release only a good reddened ass could provide.

“Thanks, Marcus.” She walked to the only free bench and bent over the apparatus, putting her forearms on the padded rests and grasped the holding bar. Her short skirt would already be giving him quite a show. For the first time, she wished the club allowed submissives to wear panties.

“Since we’ve never played together, I won’t be restraining you. We certainly don’t have that kind of trust. You understand how important it is not to move, correct?”

“Yes, Sir, I understand. I won’t move.” It pinched her last nerve to call him sir, but he was doing her a great service. For these few minutes, she’d give him the respect any Master in this club deserved.

He flipped her skirt up over her back, exposing her round ass. The paddle brushed over her lower back, across her hip, and down the length of her leg to her knee. His hand followed the paddle with a feather touch, allowing a soothing bliss to spread over her skin.

The room either quieted or she’d blocked out the noise but she welcomed the peace, needing to remember why she was there. He repeated the pattern on the other side, drawing her in with his tenderness. She swallowed against the unwelcomed thoughts threatening to break her concentration.

“I’ll give you twenty swats. I expect you to count them.”

The paddle rubbed over her right cheek and then smacked against it, rocking her whole body. The force behind the swat surprised her, this was not her first mistake. What had she been thinking? Submitting to Marcus was on her list of things to never try. She had to give him more credit. He’d caught her off her game.

“We’ll start back at one each time you forget to count.” He smacked her other cheek.

“Not as sorry as your ass will be if you forget again.” He dragged the paddle along her skin in the same figure as before, spreading the sensitivity. “I have no problem paddling your ass all night.” He smacked her right cheek again.

“Two…three…four.” Somewhere over the next couple of swats, Gina remembered why she’d come back into the club tonight. Her knuckles turned white with the force of her grip. She gulped in a breath of air and waited for the next hit to land with its punishing kiss of heat, but none came. Marcus stepped into her line of sight, just out of reach. The paddle was no longer in his hand.

He lowered himself beside her and reached out to caress her fingers until she released her strangle hold. “I’ll finish, after I’ve determined you’re in the right frame of mind.”

S.J. Maylee fell in love with storytelling at a young age and with it came a deep-seated desire for everyone to find their happily ever after. She’s finding the happy endings for her characters one steamy story at a time.

When she’s not reading or writing, you can find her caring for her garden, laughing with her two young sons, or dancing to her husband’s music. She’s a PMP (Project Management Professional), Nia instructor, and coffee addict.

As a writer she has a tendency to break hearts, but she always glues them back together.

WHERE YOU CAN FIND BOOKS BY S.J. MAYLEE:

2 thoughts on “NEW RELEASE: Taking Over by S.J. Maylee”