Happy release day to Lydia Michaels & Allyson Young! Today I’ve got a look at Lost Together, book #2 in their hot new contemporary series, Degrees of Separation. Check it out!

Lost Together (Degrees of Separation #2) by Lydia Michaels & Allyson Young 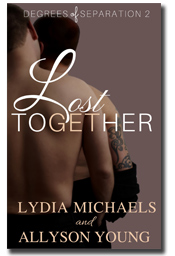 December has vanished. Rejected by her troubled husband, Austin, and pushed, at his insistence, into the arms of his best friend, Cord, she’s uncertain what the future holds. She loves her husband, regardless of his addiction, but she also loves his best friend. At odds with everything she believed to be her traditional reality, she flees the only home she’s ever known.

Heartbroken, Cord does the right thing and confronts his reluctant betrayal of Austin after losing the woman they both love. He takes charge, dragging Austin back from the edge of oblivion, only to find himself plunged deeper into a life of heartache.

On a path to redemption, Austin must not only confront personal truths, but consider the sacrifices necessary to save his marriage and his friendship with Cord.

An unexpected reunion and exposed secrets will either derail or establish their future as one.

WARNING: This book contains subject matter suitable for mature reading audiences. Some content may be offensive to sensitive readers. Degrees of Separation is a MMF ménage trilogy with many emotionally graphic encounters and challenging situations that break the rules of traditional romance. 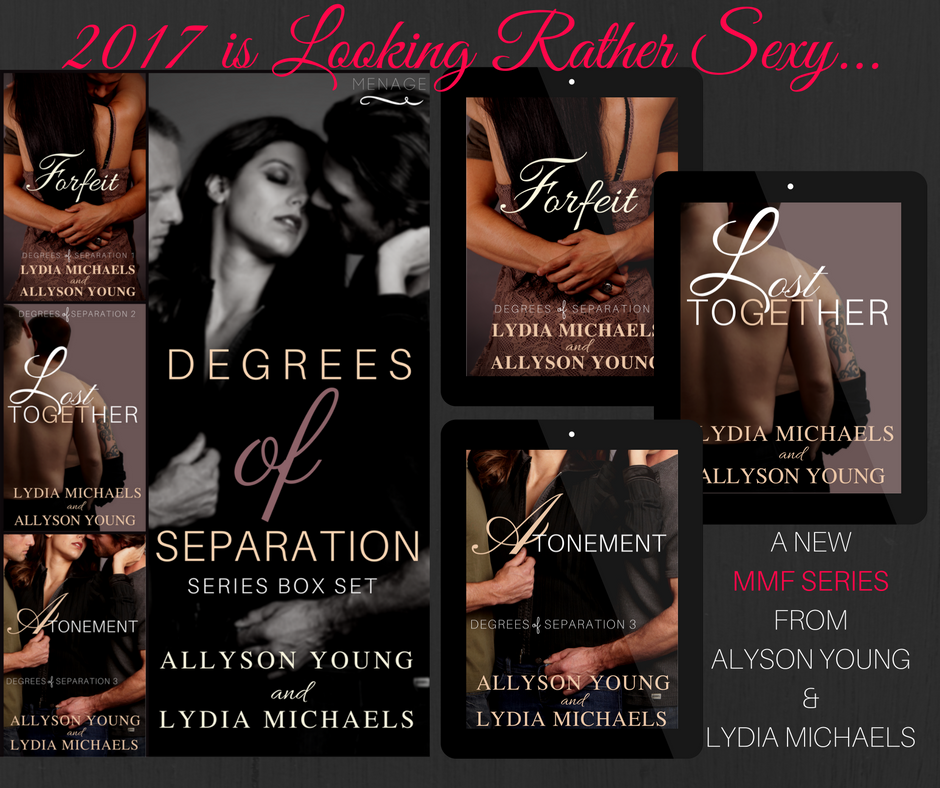 The second she was gone the asshole in the room spoke up. “You’re wasting your time fighting it.”

His fork clattered to his plate. “What the fuck is wrong with you? Stop shoving me at your wife!”

Austin stared past Cord, his face filling with concern.

“I…I forgot the knife.” She quickly placed the dishes on the table, her steps faltering, and fled to the kitchen.

“Great,” Cord snapped, bunching up his napkin and tossing it on the table. “Enjoy your fucking cake. I’m out of here.”

Austin opened his big mouth, but Cord was done talking to him. Reasoning with Austin was like trying to discuss physics with a chimp. “Shut it, Austin.”

He detoured to the kitchen, unable to take his rage out on her. “Ember, I didn’t mean—”

“It’s okay.” Her fingers twisted into a dishcloth and then she dashed away a tear.

Fuck. Tears. Not tears! His concern shifted into panic. “It’s not okay. I don’t know what Austin told you—”

She fucking knew her husband was messing with him? It didn’t make any sense. “Why is he doing this?”

Now she shrugged. “He’s Austin. Once he gets something in his head…”

Cord rubbed his palm over his face and squeezed. “What does he expect to gain from this? He’s just making an uncomfortable situation worse.”

“He’s trying to fix it. He doesn’t understand, because he wasn’t there. He thinks if we put everything out in the open the guilt will go away. He thinks it’s best to deal with it.”

“Deal with it how?” He wasn’t a fucking puppet Austin could place in whatever position he wanted.

All thoughts of her husband vanished as he focused on the ‘f’ word, for his sins. “What are you feeling?”

Her face tightened and her hand pressed into her chest, her eyes betraying her show of bravado. “Here. It hurts. I don’t know how to make it stop, Cord.”

“Hurts how?” He took a slow step closer, keeping his voice low.

Eyes pleading, she looked up at him, her mouth tight with worry. “When I’m near you, my heart beats so fast I’m afraid it’ll explode. But I know I can’t… I can’t express what’s inside of me. Then this unbearable ache takes hold. It just…hurts.”